More than ever, the Palestinian people in both the West Bank and in Gaza need international protection against the State of Israel, its army and its criminal trespassing settlers.

The kidnapping and the “burned alive” of Abu- Khudair by criminal Jewish settlers show the urgent needs for such protection.

If protecting Israeli civilians, soldiers and armed settlers is “holy” to Mahmoud Abbas, then protecting Palestinians, their homes, farms and place of worship must be ‘holier”.

When Yasser Arafat signed Oslo, Yitzhak Rabin made sure Israel’s security, the security of its occupying soldiers and the protection of its criminal settlers was on the top of his agenda. In contrast the security and safety of Palestinians was never on Arafat top agenda.

Notwithstanding the 80,000 strong Palestinian Security Forces, and an annual budget of over $1.3 billions, the safety and security of Palestinians in their homes, villages and farms was never an issue for Mahmoud Abbas, his negotiators and for the entire Palestinian Authority since Oslo.

Mahmoud Abbas like Yasser Arafat made the security of Israeli Occupation central theme of their presidency with Yasser Arafat setting up more than 13 different security agency, non of whom with a mission to protect Palestinians from attacks by the IDF or attacks by marauding Hill Top Jews or trespassing criminal Jewish settlers. Abbas is no different.

Under International law and as practiced by the French, the Dutch, the Norwegians, the Belgians during the Nazi Occupation, all German soldiers and German settlers and agents of the Occupation whether armed or not were legitimate targets of the resistance.

The same should apply in the Occupied Palestinian Territories. Arafat and Abbas made an exception to that, in lieu of cash donated by countries like the US and Europe and some Arab countries, Palestinian Security Forces was never envisioned or trained to protect Palestinians, their homes, properties and villages but dedicated to the protection of the leadership, the Jewish Occupation certainly the criminal Jewish settlers. 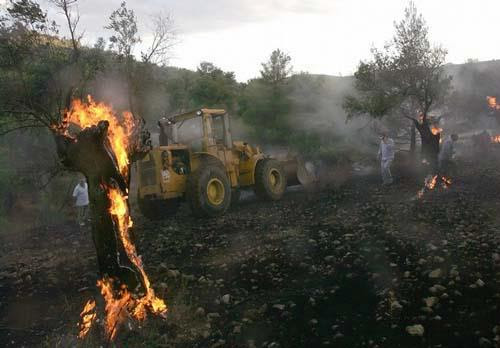 Jewish settlers in the area around the Palestinian city of Hebron have a history of extreme violence against the Palestinian culminating with the mass murder of some 29 worshipers and hundreds injured at the hand of the American-Israeli settlers Baruch Goldstein. Kiryat Arba has a long history of extreme racist violence against Palestinians in and around Hebron. No one should wonder why Arabs are angry at these criminal trespassers.

The Hebron Protocol signed by Bibi Netanyahu and Yasser Arafat in 1997 solidified the presence of an extremely violent Jewish Settler community of some 5,000 mostly Americans putting some 150,000 Palestinians under virtual and constant siege and curfew by both the IDF and armed Jewish Settlers.

Arafat and his negotiating team never included a provision to protect Palestinians within the city but agreed to provisions providing for the protection and security of these criminal trespassers by the IDF.

Since Oslo and for the more than 20 years of constant useless negotiations, the Palestinian leadership of both Arafat and Abbas continued with their commitment to reach a negotiated peaceful solution while Israel subsequent governments were committed to expanding illegal Jewish settlements and having total security control even over areas that are nominally under Palestinian authority. Israel before and after Oslo was never committed to peace. Only the fools in Ramallah continue to believe in that.

Criminal Jewish settlers armed and unarmed have a long history of attacking Palestinian villages destroying farms, uprooting and burning century old olive trees, killing life stock, poisoning water wells and defacing place of worship both Christians and Muslims and with impunity, and most often with the support and protection of the IDF and the total absence of Palestinian Security Forces that simply “disappear” when most needed.

On the other hand, Palestinian Security Forces are hapless and helpless with no authority or power often called “Dayton Security Forces” with no commitments or standing orders to protect Palestinians and their villages from Jewish settlers let alone the IDF.

As Mahmoud Abbas announced couple of weeks ago, commitment to Israeli security its army and its settlers are “holy”. With a statement and commitment like that the Palestinian people and their property are at grave risk and need urgently the deployment of an international “forces” made up of UN and NATO troops to step in and act as a buffer zone between the IDF and criminal settlers and the Palestinians.

Safety and Security of Palestinians are never “holy” to Abbas.

The daily intrusions, kidnapping openly practiced by the Government of the State of Israel, must stop. The constant and ever destruction and demolition of homes must stop. The ever-present house search, destruction of household furniture and appliance and theft of cash and jewelry has to stop. These criminal Jewish trespassing settlers must be put out of business once and for all.

One can understand the total failing of Mahmoud Abbas in providing protection for his people. however the least thing he can do is go to the UN and demand an immediate international protections of Palestinians both in the West Bank and Gaza and demand the placing of the entire Palestinian Occupied Territories (Gaza and West Bank) under an international trusteeship. Disbanding the Palestinian Authority and the shameless Palestinian Security Forces is a must and now.