Home Government Nuke Politics of Iran, Israel, and the World 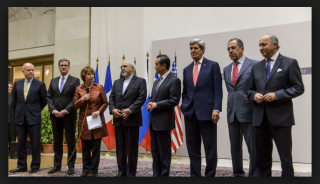 The Focus in Vienna on Iran’s Nuclear Energy Program should put a Spotlight also on Israel’s Secret Nuclear Arsenal.

It should call International Attention to the need for a more comprehensive process to address the Intensifying Dangers of Nuclear Proliferation.

We Need Universal Standards for Regulating Nuclear Weaponry and Nuclear Energy on our way to a global exit strategy from our massively imperiled condition.  We need to find a way to put behind humanity the horrors of Nuclear War together with the slow but steady contamination of All Life in Earth through Multiple Fukushimas.

Iran’s nuclear program continues to be the subject one of the world’s most delicate and consequential diplomatic negotiations. The most recent round of talks began in Vienna on July 2nd. The deadline for the completion of the process as presently constituted is July 20th.

Besides Iran, the countries with seats at the table are the five permanent members of the UN’s Security Council, namely the USA, Britain, France, Russia and China. Germany is also represented. While the government of Israel is not formally taking part, its officials are actively lobbying the US negotiating team led by William Burns.

Yuval Steinitz explained that he and other Israeli government officials have been meeting regularly with US State Department officials in Washington. The goal of the Israeli delegation is to persuade the government of US President Barak Obama to demand that Iran dismantle its nuclear program altogether.

The US government has held back, seemingly at least, from giving way to Israel’s insistence that Iran must abandon its nuclear program altogether. The US position remains that the managers of Iran’s nuclear program must diminish rather than terminate altogether their production of enriched uranium and the centrifuges that are vital in the manufacturing of this essential ingredient of nuclear weaponry. 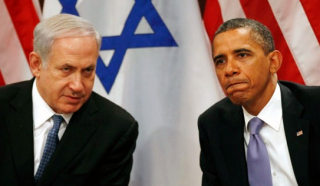 The distance between the Israeli and US positions is news in itself, a demonstration that perhaps the US government is at last showing some capacity to advance independently its own foreign policy interests rather than subordinate itself in every instance to Israeli interests, priorities, and agendas.

Ever since the current Israeli Prime Minister openly backed Republican presidential candidate Mitt Romney in the 2012 national election, the personal dislike between Barack Obama and Benjamin Netanyahu has become palpable.

The carrot being offered the Iranian government in these negotiations is what US Secretary of State John Kerry has described as “an end to Iran’s economic and diplomatic isolation” through a further lifting of sanctions imposed on Iranian citizens.

A countervailing development is the fact that the recent spike in US hostilities towards the government of Vladimir Putin is augmenting the incentive for increased Iran-Russia trade and strategic cooperation, includingin the field of nuclear energy production. 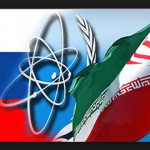 The great elephant in this round of negotiations at Vienna is that all the world powers sitting across the table from the Iranian delegation led by Javad Zarif have huge arsenals of nuclear weapons, many components of which are secret and not subject to external inspection and regulation.

Accordingly, there is much hypocrisy embedded in the disparity between the expectations being placed on the government of Iran and the prominent role of nuclear weaponry in the international positioning of the five permanent members of the UN Security Council.

The Need for an International Spotlight on Israel’s Nuclear Weapons

In the lead up to this round of negotiations in Vienna the Israeli Prime Minister, Benjamin Netanyahu, embarked on yet another media blitz alleging the imminence of a shift in Iran from nuclear energy to nuclear weapons production. Once again these interventions went ahead without any serious responses underlining the fact that Israel itself is extremely well armed with extensive arsenals of nuclear weapons together with sophisticate delivery systems.

In spite of all the revelations emanating from Mordechai Vanunu and others about Israel’s capabilities of nuclear destruction, the Israeli government continues to uphold the formal position, sometimes referred to as “opacity,” that it is not armed with nuclear weapons. The time to demand a stop to this Israeli speciousness is upon us.

The Israeli government’s unwillingness to join the international system for regulating nuclear weaponry, as limited and imperfect as this system remains, is marked by its failure to sanction the Nuclear Non-Proliferation Treaty.

In his letter to the New York Times last September 11 Russian President Vladimir Putin emphasized that the recent history of invasions led by the US Armed Forces has had the effect of promoting nuclear proliferation.

The reality, for instance, that Iraq was targeted due in part to the fact its did not have weapons of mass destruction led many observers to troubling conclusions.

Putin writes, “The world reacts by asking: if you cannot count on international law, then you must find other ways to ensure your security. Thus a growing number of countries seek to acquire weapons of mass destruction. This is logical: if you have the bomb, no one will touch you. We are left with talk of the need to strengthen nonproliferation, when in reality this is being eroded.”

The origins of the Iranian nuclear program are rooted in the “Atoms for Peace” initiative of the US government. US President Dwight D. Eisenhower initiated this program in 1953 with his UN speech aimed a calming international public 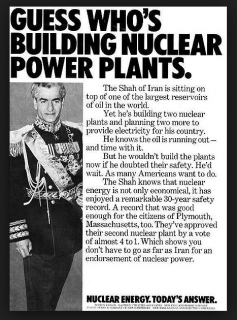 opinion that was truly traumatized by the nuclear arms race then underway between the United States and the Soviet Union. At the peak of this arms race scores of hundreds of nuclear weapons were spewing out vast quantities of radioactivity into the open atmosphere.

Eisenhower’s initiative embodied a victory of those within the US power establishment that advocated the broad dissemination of US-based nuclear energy technology to US allies in the Cold War.

Admiral Hyman G. Rickover led the group favoring the sharing of nuclear knowledge and technology. The main official in charge of transforming nuclear weapons technology for the operation of US nuclear submarines, Rickover promoted the development of land-based nuclear power plants as boon for humanity.

The Atoms for Peace program was essential to the establishment of nuclear power plants in many countries including Japan and Iran. The nuclear energy program was promoted in Japan after the formal 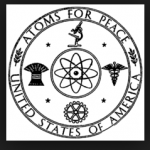 end of the US occupation of that country.

This US occupation followed the Second World War whose final violent acts were the US atomic attacks on Hiroshima and Nagasaki.

In Iran, the Atoms for Peace program was implemented after the covert Anglo-American removal in 1953 of the country’s elected president, Mohammed Mosaddegh. In the advertisement above the US government openly boasts of the help it offered the government of the Shah of Iran.

The US government together with companies such as General Electric, therefore, have been major players in the development of nuclear energy programs in many countries including those of Iran and Japan. This same US-centred military-industrial complex bears responsibility for the radioactive contamination of many civilian populations, including those in Iraq, through their subjugation to depleted uranium shells fired into their midst.

Unlike chemical pollution, nuclear radioactivity permanently alters the DNA of whole groups resulting in increased rates of cancer and birth deformities in perpetuity.

Hiroshima, Fukushima, and the Dangers of False-Flag Terrorism to Justify Illegal Invasions

The entire global community continues to be menaced by the ongoing debacle of spewing, proliferating radioactivity from the crippled nuclear energy plant at Fukushima, only one of 58 such nuclear energy installations on the earthquake-tsunami-prone islands of Japan.

Similarly, the prospect becomes more imminent every day of some kind of missing nuclear weapon being deployed in a false-flag nuclear event with the goal of blaming some targeted country, countries or groups. Such a deception would be exploited to give justification to the kind of invasion that almost took place last September when the government of Syria was falsely accused of firing chemical weapons at its own citizens.

This devastating array of nuclear threats to public health, to the environment, and to the international security of the global community create the broader context of the crucial negotiations now underway in Vienna. Ideally these talks can help call attention to the negative consequences for the global community of the Israeli-driven demonization of Iran.

Those responsible for this propaganda of demonization seek to deny Iran its just recognition as a central world power peopled by a large and highly-educated population with much to contribute to the arts and sciences of an emerging global civilization.

The depiction of Iran as a proponent of aggressive wars flies in the face of its history of non-aggression. The irony of the accusations are heightened by the fact that they come from the very powers with the highest propensity to mount military aggressions, usually outside the rules and regulations of international law. 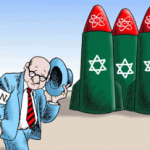 Rather than continuing the demonization of Iran as some sort of nuclearized juvenile delinquent, the international community must rise to the challenge of formulating and enforcing universal standards for the regulation and eventual dismantling of nuclear weaponry everywhere.

As the inventor of nuclear weaponry, as the holders of the largest stockpiles of these lethal devices, as the world’s leader in the continuing development of new generations of nuclear weaponry, and as the only power that has deployed these weapons of mass destruction on civilian populations, it falls to the United States to show leadership in freeing humanity from the unrelenting mass trauma of living every minute of every day of our lives under the nuclear sword of Damocles.

Anthony Hall is Professor of Globalization Studies at University of Lethbridge in Alberta Canada where he has taught for 25 years. Along with Kevin Barrett, Tony is co-host of False Flag Weekly News at No Lies Radio Network. Prof. Hall is also Editor In Chief of American Herald Tribune. His recent books include The American Empire and the Fourth World as well as Earth into Property: Colonization, Decolonization and Capitalism. Both are peered reviewed academic texts published by McGill-Queen’s University Press. Prof. Hall is a contributor to both books edited by Dr. Barrett on the two false flag shootings in Paris in 2015.

Part II was selected recently by The Independent in the UK as one of the best books of 2010. The journal of the American Library Association called Earth into Property “a scholarly tour de force.”