Am I being “unfair to Hitler” by comparing Zionism and Nazism? That is what many of the comments on this article suggest. -KB 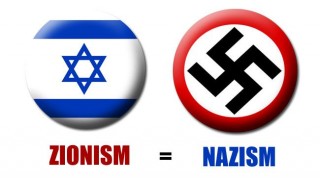 We recently learned that three Israeli suspects have confessed to burning to death Palestinian teenager Mohammed Abu Khdair. The killers even re-enacted their grisly deed for police.

The Western media is treating this incident as an isolated outrage. It is not. During the past 14 years, Israelis have murdered one Palestinian child every four days, on average.

During the second half of June, while the Zionist-dominated global media relentlessly hyped the “three kidnapped Israeli teens” story, several Palestinians were shot to death by the IDF, including 15-year-old Mohammed Dudin, who was murdered in Dura on June 20th. Corporate media coverage of the killing of Mohammed Dudin was negligible. To the mainstream media, the lives of Israeli Jews are priceless, while those of Palestinians are worth little or nothing.

Statistics bear out this conclusion. A study by If Americans Knew found that the New York Times, America’s newspaper of record, reported Israeli children’s deaths at 6.8 times the rate of Palestinian children’s deaths.

In an exclusive interview with Truth Jihad Radio, Palestinian professor Mazin Qumsiyeh said: “We have a huge problem in the way American media portrays the situation. Between the year 2000, when an uprising started against the occupation, until today, there have been over 1,540 Palestinian children killed by Israeli soldiers and illegal settlers. These children are barely mentioned anywhere in Western media; whereas every time an Israeli is killed, rare as that may be compared to the number of Palestinian children and civilians killed, we hear everything in detail about these people.”

What explains the disparity? The New York Times, like much of the Western mainstream media, is owned and operated by Zionists. In an article entitled “Do Jews Dominate in American Media? And So What If We Do?” Jewish ex-New York Times journalist Philip Weiss notes that pro-Israel Jews do indeed dominate US corporate media. He adds: “The result is that Americans are not getting the full story re Israel/Palestine.”

Why do the Jewish Americans who dominate American media force their pro-Israeli bias into their news coverage – to the extent of radically devaluing Palestinian children’s lives? Weiss explains: “The Jewish cohort of which I am a part has largely accepted the duty that Max Frankel felt, of supporting Israel. This duty is rarely interrogated, and yet consciously or not we all know that American public opinion/leadership is critical to Israel’s political invulnerability; and we think that if we take our fingers out of the dike, who knows what will happen.”

The corporate media Zionists are even covering up Israeli atrocities against American young people. (These journalists apparently identify more with Israelis than with Americans.) Last Thursday, for example, 15-year-old American citizen Tariq Abu Khdair, a cousin of lynching victim Muhammad Abu Khdair, was beaten horrifically by Israeli police in Occupied Jerusalem. He gave a heart-rending interview describing the assault: “And they hit me, and they kept hitting me and then I fell asleep and then I woke up in the hospital.” US corporate media, as usual, buried the story… just as it buried the story of Furkan Dogan, the American teenager slaughtered by Israeli soldiers aboard the Mavi Marmara.

A growing number of Jewish Americans, including Philip Weiss, have developed a more accurate and compassionate view of the conflict in Occupied Palestine. More and more American Jews are facing the horrible truth: Zionist Israel is becoming more like Nazi Germany every day.

During the past week, Israeli Jews have been forming lynch mobs in the streets to hunt down and brutalize Arabs. Their actions remind many observers of the Nazi gangs that chased and brutalized Jews in 1930s Germany.

Israel’s policy towards its neighbors is also reminiscent of Nazi Germany’s. Hitler famously sought “lebensraum,” meaning “territory believed necessary for national existence or economic self-sufficiency.” So he launched wars of aggression and colonization, intending to seize and occupy territories in the Slavic east.

Israel has been launching blitzkrieg wars for lebensraum on a regular basis since the Zionists began seizing Palestinian territory in 1948. These invasions are blatant violations of the Nuremburg Principles, which state that aggressive war is the supreme war crime. Yet Israel excuses itself by claiming that, because it was founded (in part) by refugees from Nazi Germany, it has the right to engage in Nazi-style behavior.

Zionism and Nazism have something else in common: racial superiority. Both Nazis and Zionists believe themselves a “master race” or “chosen people” whose destiny is to lord it over lesser beings. The Nazis looked down on Jews, Gypsies, Slavs, Arabs and Africans in exactly the same way that Zionists look down on Arabs (and goyim in general) today.

Zionist racism, like Nazi racism, is virulent to the point of being genocidal. As international law professor Francis Boyle says, “Zionism’s ‘final solution’ to Israel’s much-touted and racist ‘demographic threat’ allegedly posed by the very existence of the Palestinians has always been genocide, whether slow-motion or in blood-thirsty spurts of violence.” Just as the Nazis dedicated themselves to building an ever-expanding Reich free of the taint of lesser races, the Zionists are likewise bent on ethnically-cleansing an ever-larger slice of Palestine. After that, hard-line Zionists promise, comes the entire Middle East from the Nile to the Euphrates.

The Gaza Strip – which some call the world’s largest open-air concentration camp, others the new Warsaw Ghetto – is once again being bombed. Israelis are wondering aloud whether Netanyahu is planning another bloody ground invasion. Seasoned Mideast observers such as Alan Hart, the former top BBC Mideast correspondent, even warn that one day soon Israel may launch a wider Mideast war that would allow the Zionists to finish the ethnic cleansing of Palestine under the “fog of war.”

The post-World War II slogan “never again” is obsolete. It is happening again. The new Nazis – the Zionists – are running amok in Palestine and pushing the world towards total war.