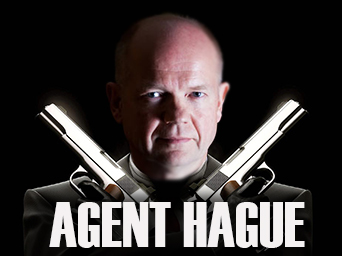 William Hague has quit as British foreign secretary. We thought the fawning Zio, Miliband D, was bad enough but his successor, Hague, probably made us even more enemies around the world.

Did he finally realise that his infatuation with the criminal state of Israel was incompatible with his position as a Minister of the Crown? Not judging by his final performance. In a statement on Gaza to the House of Commons http://www.theyworkforyou.com/debates/?id=2014-07-14a.581.0&s=speaker%3A10327#g587.0he said:

“Rising tensions have been followed by sustained barrages of rocket fire from Gaza into Israel…. to which Israel responded with air strikes. Rockets are fired indiscriminately against the civilian population, including against major Israeli cities. Israel then launched Operation Protective Edge on 7 July.”

He counted the number of Gaza rockets but not the number of rockets, bombs, missiles, tank shells, etc, fired by Israel. Gaza launched rockets indiscriminately at the civilian population (no high-tech guidance system from America, you see) killing just 1 person, while Israel with its state-of-the-art weaponry “strikes targets”, implying precision. He quoted casualty figure which of course are growing all the time. As I write, Israel’s precision strikes have killed 205 Palestinians including 39 children and wounded 1,530 including 422 children. 1,177 homes have been destroyed and 13,550 damaged. If that isn’t collective punishment I don’t know what is. And Hague conveniently omitted to mention the raids and airstrikes inflicted on Gaza’s citizens as a matter of routine since 2006.

Many MPs then put questions. Replying to one about the causes of the conflict Hague said:
“The ultimate cause is the failure to bring about a two-state solution… failures exist on both sides, and therefore, for us, it is not a question of sanctions on one side or the other; it is a question of our effort to bring about a viable peace process, and that is where we must continue to place our emphasis.”

A falsehood, of course, designed to steer discussion away from a law-based solution and focus solely on the idea that two states can be created by “negotiation” in which one party holds a gun to theother’s head and enjoys the richest pickings. The real causes, as everyone including Hague knows, stem from the unpardonable partition of Palestine without consulting its native population, mega-breaches of international law, the illegal occupation and dispossession, the annexation of Jerusalem, the deliberate withholding of justice, the refusal by Israel’s sponsors to accept Hamas as the people’s democratic choice and the subsequent blockade of Gaza since 2006.

A single state based on ethnic equality, like any other civilised country, is not even considered by the meddling powers.

Here’s a selection of his other remarks.

But sanctions have unjustly been applied against the resistance, Hamas. So how can the peace process advance?

“The Palestinian Authority should show leadership, recommitting itself to dialogue with Israel…”

For what purpose other than to allow Israel, once again, more time to steal more land and establish more irreversible facts on the ground?

“Only a real peace, with a safe and secure Israel living alongside a viable and contiguous Palestinian state, can end this cycle of violence. And it is only the parties themselves, with our support, who can make that peace.”

Another lie designed to discourage the Palestinians from taking their case to international law and the International Criminal Court. Justice under the law is conspicuously absent in everything that’s said. And why should Palestinians be content with only a “viable” demilitarised state constantly at the mercy of “safe and secure” Israel armed to the teeth?

Never won because it’s all talk and no action. Israel faces no consequences for its contempt for international law and ceasefire agreements.

“Any nation faced with this situation would respond to such rocket attacks and would be under immense pressure to do so from its own domestic population.”

Has any other nation had its military jackboot on the throat of its neighbour for the last half-century? Besides, Palestinians are entitled to defend themselves, as are Israelis. And previous ceasefires solved nothing.

“We do have to point also to the responsibilities… of anyone who chooses to launch hundreds of rockets from a densely populated area.”

Does Hague not understand why Gaza is so overcrowded?

Altogether it was a masterclass in craven defence of a deeply unpleasant foreign power.

A few days earlier Israel’s prime minister Netanyahu had announced: “No international pressure will prevent us from striking the terrorists who are attacking us.”

William Hague has been an adoring Friend of Israel since the tender age of 15. In 2007, while shadow foreign secretary, he said: “We will always have strong economic and political ties with Israel. We will always be a friend of Israel.”On another occasion he declared: “The unbroken thread of Conservative Party support for Israel that has run for nearly a century from the Balfour Declaration to the present day will continue….It will remain constant, unbroken, and undiminished by the passage of time.”

Ending the Occupation, pushing Israel back behind its UN-allocated borders (or even the armistice green line) and breaking the cruel blockade of Gaza has never been on his or Washington’s agenda. Consequently peace has been impossible, which suits his friends in Tel Aviv. As far as they are concerned, permanent unrest is the name of the game for as long as the US and UK can be persuaded to provide cover. To that end the peace process which Hague loudly supports for appearance’s sake is designed to collapse time after time, with the blame always pinned on the Palestinians.

Hague is also a chronic warmonger. He voted “very strongly” for the Iraq war. He made an ass of himself (and Britain) over Libya. He would have embroiled us in the hell of Syria if he hadn’t been stopped in his tracks by Parliament. And we’ve had to endure his obnoxious sabre-rattling at Israel’s enemy Iran.Iran of course is no threat to the UK and ought to be cultivated in friendship, but Hague seems to have had an unquenchable desire to cripple the Iranian nation with ever-tighter sanctions reminiscent of those against Iraq (another of Israel’s enemies) in the run-up to the war he so eagerly supported.

And let us not forget how Hague messed with our universal jurisdiction laws to provide a safe haven for Israel’s war crimes suspects, notably Tzipi Livni who was largely responsible for the terror that brought death and destruction to Gaza’s civilians in the vicious blitzkrieg known as Operation Cast Lead, in which 1,400 Gazans were slaughtered including 320 children and 109 women, and thousands more horribly maimed. Livni was unrepentent.

He tried to make Livni’s monstrous crime look good by claiming, as reported on the Conservative Friends of Israel website, that the immediate trigger for the assault was “the barrage of hundreds of rocket attacks against Israel on the expiry of the ceasefire or truce.” It is well known that the ceasefire didn’t expire. It was deliberately breached by an Israeli raid into Gaza that killed several Palestinians with the intention of deliberately provoking a cviolent response that could be used as an excuse to launch an attack the Israelis had been preparing for months.

Now Hague tries to make Netanyahu’s crimes look good. The provocation this time was the dracononian rampage and mass arrests by Israel following the deaths of three teenagers from illegal settlements. Israel blamed Hamas for the murders without producing a shred of evidence. For all anyone knows, it could have been a ‘false flag’ setup – which the Israelis are very adept at. The burning of the Palestinian lad simply fuelled more hatred.

So, after 9 days of genocidal slaughter the scene was set for a ceasefire. Unfortunately our new Foreign Secretary, Philip Hammond, was off to a shaky start. He said yesterday: “I welcome Egypt’s ceasefire initiative. I pay tribute to the Egyptian government for their efforts and the leadership they have shown in attempting to broker a cessation of hostilities.”

Given the Egyptian regime’s hostility towards Hamas in particular and Gaza in general, it is hardly an honest broker. And rumour has it that peace envoy Blair drafted the ceasefire, so everyone must have known that this was going to be a very lopsided deal.

Hamas say they were not consulted on the terms and instead of coming through proper diplomatic channels it was release to the media as soon as Israel agreed it. Futhermore it contained no guarantees such as a permanent end to the 8-year siege (promised but not implemented in the 2012 ceasefire) or the release of prisoners who had been freed then re-arrested by Israel. Vague promises to “de-escalate” – an absurd buzzword – and ease the blockade had been made before and quickly broken. In effect the proposal sought to reinstate the 2012 ceasefire terms which Israel had repeatedly violated. Even if Israel halted its fire now, said Hamas, it would have “no value” after the extensive damage already done in Gaza.And Hamas’s military wing dismissed the Egyptian proposal as amounting to surrender. What was in it for the illegally occupied Palestinians?

Clearly, no good is ever going to come of all this until the US, UK, EU and other major powers bite the bullet, confront Israel and enforce Palestinian rights under international law. Meanwhile Hammond was lending himself to the charade: “I also welcome Israel’s acceptance in principle of the terms of the proposed ceasefire agreement and the Palestinian Authority’s endorsement of the Egyptian initiative. I call on Hamas and all militant factions in Gaza to take this opportunity to cease hostilities…”

Hamas didn’t swallow it, nor were they expected to. After a 6-hour pause to refuel and re-arm Israel polished its halo and carried on with its war crime. And the trolley-lady brought Mr Hammond a nice cup of civil service tea.