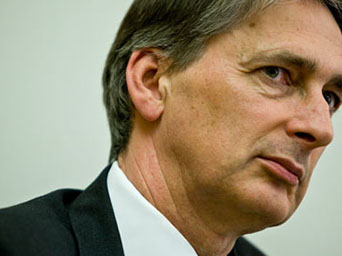 Carry on slaughtering the men, women and children you illegally occupy and daily humiliate…

Britain’s newly-minted foreign secretary Philip Hammond has lost his shine already. A few days ago he warmly welcomed Egypt’s bogus ceasfire proposal which hadn’t even been shown to Hamas.

Yesterday he was asked three times on the the BBC’s Andrew Marr Show whether Israel’s military operations in Gaza were a proportionate response and he ducked the question every time http://news.bbc.co.uk/1/shared/bsp/hi/pdfs/20071402.pdf.

However he did say: “We will be looking very carefully at what is happening on the ground to make sure that it is proportionate, that civilian lives are being protected in a proper way.”

The continuing carnage suggests otherwise. Would Mr Hammond care to tell the world what action he has actually taken to “make sure”? Perhaps blood-letting doesn’t bother him. After all, he voted with the warmongers for the Iraq war.

Of course, he recited the obligatory mantra that Israel has the right to protect itself. The best way to avoid Palestinian loss of life in Gaza, he said, would be for Hamas to stop firing rockets from Gaza and “in those circumstances the world would not expect any kind of Israeli action against Gaza.”

He knows perfectly well that no rockets are fired from the West Bank, yet the West Bank is still under brutal occupation and blockade and Israeli repression there is unceasing. If rockets from Gaza were to stop, what difference would it make to the Palestinians there?

He’ll know too that Israel cannot claim right of self-defence against a people it has illegally occupied and humiliated for decades, and that the Palestinians are entitled to take up arms against their tormentor.

He finished by saying: “We need an immediate re-imposition of a ceasefire and then we need proper discussion about dealing with the underlying grievances.” Note the downgrading of war crimes and crimes aganst humanity to the level of mere grievances. I wonder if Hammond knows the first thing about the Palestinians’ “grievances”.

I commend to the new Foreign Secretary this video which shows how his attitude has rendered some people almost speechless. http://www.youtube.com/watch?feature=player_embedded&v=7lfRlits6WY

In a statement to the House of Commons today the prime minister David Cameron issued what can only be described as a barrowload of propaganda horse manure on both the airliner tragedy in Ukraine and the Israeli blitzkrieg on Gaza.

Eager to flog his plan for more sanctions he said the conflict in Ukraine could have been curtailed by Moscow but had been fermented by Moscow. It was a defining moment for Russia. “Those of us in Europe should not need to be reminded of the consequences of turning a blind eye when big countries bully smaller countries.” He didn’t see the irony. Perhaps he doesn’t realise that his beloved Israel’s defining moment has arrived.

Turning to Gaza, he came out with this: “The crisis was triggered by Hamas raining hundreds of rockets on Israeli cities indiscriminately targeting civilians in contravention of all humanitarian law and norms. We’ve been clear throughout this crisis that Israel has the right to defend itself. Those criticising Israel’s response must ask themselves how they would expect their own government to react if hundreds of rockets were raining down on British cities today.” Dear God, does no-one vet the drivel tossed out by Number 10’s speechwriters?

I mean, would a British government be mad enough to illegally occupy its nextdoor neighbours for nearly 50 years, trash their heritage, steal their resources, move settlers into choice locations, cage the natives within the sealed remnants then bomb them all to hell and back for firing garden-shed rockets? Well yes, I guess a Cameron government might do exactly that if told to… and call it self-defence just like their Israeli buddies.