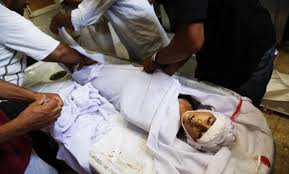 It seems that AIPAC and the Jewish Lobby was sleeping on the job. It took more than 10 days since Israel began its attack on Gaza committing war crime after another to order the US Congress to vote its support for Israel. America is a partner in the crimes committed in Gaza, it’s administration, it’s Congress certainly the American Jewish leadership.

The very proud and brave Jewish Army is using the latest weapons and technology the US could provide  to kill and destroy including the use internationally forbidden weapons.

Surprisingly, the Obama administration is yet to announce the speedy deliver of more arms and weapons to replenish what the Israelis have used on Gaza civilians so far. When that happens it is another proof that the US is guilty as Israel and is a partner in its war crimes against the civilians of Gaza.

For over 6 years the criminal Jewish state of Israel has laid siege over Gaza closing all access to the people of Gaza from land, air and sea. It blocked all food shipment, fuel and medical supplies in partnership with Mahmoud Abbas and Housni Mubarak and now in partnership with General Sisi.

As is expected every time Israel commits war crimes the US Congress declares its support for Israel as it goes about committing murder after murder with impunity. As expected from the “only democracy in the Middle East”. Israel goes about its murder in Gaza and the US Congress gives it money and moral support.

It never so surprising for the US Congress to give total and blind support to Israel. In fact while our Congress takes days to address our economic crises and votes on support for our business and workers, the same US Congress takes less than a minute to vote tens of billions of dollars to the criminal Jewish state.

To those who sponsored and voted for such a resolution I have one wish, may you, your children, your family and your loved ones face the same fate as the children of Gaza.