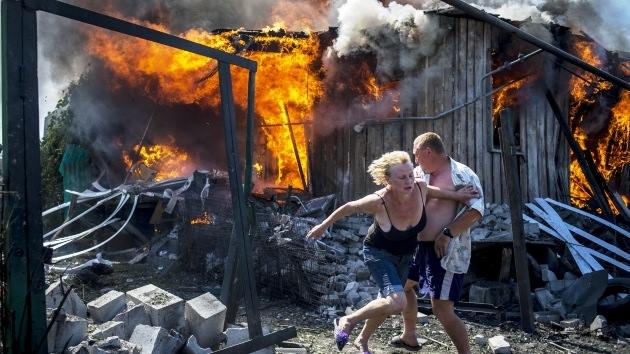 An American political commentator says Washington’s allegation that Russia is attacking Ukrainian troops is bogus, adding that NATO is currently doing military action in the country.

You can listen to the 4 minute audio interview on Press TV here.

“We were very disappointed to hear the recent comments by General Dempsey. Basically what we feel was a gross exaggeration if he is claiming that Russia is starting to interfere directly in the Ukrainian conflict,” Veterans Today columnist Jim Dean said in an interview with Press TV on Sunday.

Chairman of the US Joint Chiefs of Staff Gen. Martin Dempsey said the Pentagon is looking at possible military responses to Russia’s actions in Ukraine.

The Pentagon claimed Russia is directly shelling eastern Ukraine and channeling tanks and other powerful weaponry to pro-Russian forces there in what it characterized as a clear “military escalation” of the conflict.

“It has been claimed that’s a big escalation of Putin actually coming in and firing on a sovereign town, I mean that’s a psychological operation and we feel it an act of disloyalty to the American people to tell us something so fraudulent, if he [Dempsey] is aware and we hope that he’s been given false information by people in his own command. So, it’s bogus,” Dean said.

“Russia knows that NATO will respond by making a big NATO push with military in Ukraine,” he added.

“If anybody wants to find out who is invading and doing military action on a sovereign nation, it’s been done by NATO right now,” the analyst said.

US officials stepped up their rhetoric against Moscow following the shooting down of a Malaysian Airlines passenger jet on July 17 in which all 298 people onboard were killed.

White House Press Secretary Josh Earnest said Friday that US intelligence has concluded that President “Vladimir Putin and the Russians are culpable” for the incident.