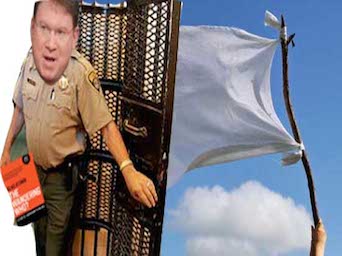 As one of the first to predict an immanent Israeli defeat in this round of violence, I was delighted to read this morning that Zionist mouthpiece Jeffrey Goldberg admits that Israel has lost the war.

“Why Is Israel Losing a War It’s Winning?” asks Goldberg. The Jewish State is a regional super power, its lobbies dominate Western politics, it is technologically superior, so what could have gone wrong?

I suspect Israel’s military leadership is aware of this argument by now. But the Palestinians have achieved far more than merely ‘surviving.’ They brought Israel to its knees. Palestinians performed heroically on the ground and displayed total unity, two things Israel did not anticipate.

They have also delivered a clear message to the Israeli people, to world Jewry and even to the miniature Jewish ‘anti Zionist’ clan – this battle is not about ‘occupation,’ 1967 or the ‘two state solution.’ It is about human dignity – the right to exist.  The Palestinians do not have any plans to fade away, they are the people of the land, and they will be back.

The IDF may be able to destroy a few tunnels, murder elders, women and children and turn streets into piles of debris, but it can’t even scratch the Palestinians’ will. Eventually, even Goldberg may be forced to admit, that the Palestinians prevailed because their objectives and goals are far greater than mere ‘survival.’

“People talk a lot about the Jewish lobby. But the worldwide Muslim lobby is bigger,” complains Goldberg.

But is that really the case? In fact, most commentators including Goldberg himself (and in the same article) agree that Hamas and the Palestinians have never been more isolated politically even within the Muslim world.  The explanation is the opposite of that preached by the ‘anti-Zionists.’

The Jewish progressive paradigm suggests that the building of alliances and leagues would ‘help’ the the Palestinians, but, in reality, once isolated and with their backs against the wall, the Palestinians prevailed militarily, politically, strategically, diplomatically and most important, spiritually.  The reason? With your back to the wall and a gun to your face, it is pretty difficult to bend over.

Goldberg, makes the routine complaints about anti Semitism: “If you’ve spent any time these past few weeks on Twitter, or in Paris, you know that anti-Semitism is another source of Israel’s international isolation.”

As we know, lying and spinning for the ‘cause’ is a kosher sport. However, we still expect Zionist merchants such as Goldberg, Regev or Dershowitz to show slightly more sophistication. Instead of ‘anti Semitism,’ what we have in Paris is a puppet government controlled by the forceful Jewish Lobby CRIF. This government is indeed unpopular and its unpopularity reflects badly on its paymasters.

“Anti-Semitism has been with us for more than 2,000 years; it is an ineradicable and shape-shifting virus,” says Goldberg.

It is sad that Jewish bad-behaviour is as old as the Jews, probably caused by the tribal, racist and supremacist roots of Jewish tradition, heritage and texts.

And it is the same Jewish racial exclusivism that is manifested in contemporary Jewish politics both Zionist and ‘anti.’ Practically speaking, opposing the Jewish State’s barbarism or its advocates, is not anti Semitism, it is humanism per se.

Goldberg, who whines about anti-Semitism on a daily basis, obviously doesn’t understand that it is he and his ilk who evoke anti-Jewish sentiment. In a patronising tone he lectures the democratically elected American government on what to do and how to behave.

“Kerry’s recent efforts to negotiate a ceasefire have come to nothing in part because his proposals treat Hamas as a legitimate organization with legitimate security needs.” The Goldbergs, AIPAC and the Dershowitzes of this world do not admit that it is not up to the Jews to define the boundaries of legitimacy. On the contrary, an American liberation is long overdue.

The American people could free their media, culture, finance and politics from that corrosive and repressive ideology that has dominated America for so long. Its influence on American foreign interests and diplomacy has ruined its value system and moral ethos and its effects on finance have left much of the country impoverished.

For years I have argued that the struggle in Palestine is our battle for humanity because we are all Palestinians. The triumph in Gaza is a wake up call for humanity. Without fear, we should identify the corrosive elements that have robbed us of our true Athenian spirit of truth and freedom and planted Jerusalem and Goldbergs in our midst.