Home World What More Horrors Are In Store for Gaza? 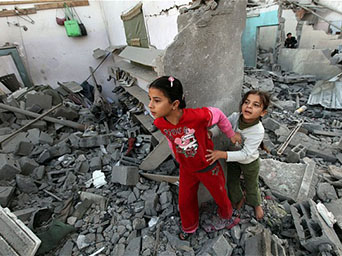 A wish-list for the brave Palestinians

I wonder what Hamas and Israeli leaders are thinking as they survey the devastation in Gaza and review the death-toll and casualty figures?

Or course, neither has to live among the ruins and clamber over the devastation. Neither has the stench of death in his nostrils, nor the dust of destruction. Neither will have to pick up the tab… that’s left to hard-pressed taxpayers in Britain and elsewhere who, unwillingly, subsidise this recurring lunacy.

Netanyahu goes nowhere near Gaza so avoids witnessing the horrors inflicted by Israeli troops on his demented orders.

Khaled Meshal, boss of the Hamas Political Bureau, is an absentee leader now living in Qatar, having blotted his copybook with the Syrians. What he actually does with his time is a mystery. If only he’d get around re-writing the dreadful Hamas Charter and produce a document more fitting for the 21st century and his movement’s aspirations, he would save his people a lot of anguish.

The day-to-day running of Gaza meanwhile is left to individuals such as Ismail Haniyeh (prime minister) and Mahmoud Al-Zahar. How these two – and the rest of their team – have managed to cope thoughout the cruel siege and the many assaults and crises since their election in 2006 is almost beyond comprehension.

Haniyeh famously said a few months ago: “Out of the ruins, we shall rock Tel Aviv.” Born and raised in a Gaza refugee camp this ex-footballer graduated from the Islamic University. Following the first Intifada he was detained, did time in Israeli prisons and was then deported to Lebanon. Returning to Gaza in 1993 he was appointed Dean of the Islamic University and became assistant to Sheik Yassin, the spiritual leader of Hamas.

Mahmoud al-Zahar is another remarkable character. A surgeon by trade (Masters degree in general surgery at Ain Shams Univerity, Cairo), he is a co-founder of Hamas and regarded as a ‘hardliner’, whatever that means in the context of Gaza’s long suffering. His personal losses in the struggle, in terms of close family members annihilated and homes destroyed, are huge.

As these two pick their way through the smoking rubble, and survey the broken and shredded bodies of the children, what goes through their minds? Maybe they’re thinking how pathetic Western Christendom is for not only letting such evil triumph in the Holy Land — of all places — but actually sponsoring it. The richly robed pointy-hatted archbishops have been very, very quiet in the face of indescribable evil. Here in Britain senior bishops have 26 seats in the House of Lords and they’ve kept their heads well below the parapet. Where is that drip Welby on this?

Maybe Haniyeh and al-Zahar are also thinking what a gutless shambles the Arab League is for not intervening.

So where do they find the courage to carry on in those few square miles of Palestinian wreckage called Gaza? Their extraordinary faith of course, a huge well of strength which we in the West will never quite understand.

And what of Obama and Kerry and Cameron? They sponsor and stand four-square behind the berserk monster that did all this, proclaiming shared values, common interests, undying admiration and unwavering support… and deflecting criticism by pronouncing justification on absurd grounds of self-defence against its terrorised and traumatised victim.

The enormity of it – the barbarity and terrible sacrifice of the last three weeks — is surely unprecedented in modern times, and the cowardice of the international community unforgivable. Seekers of justice cannot allow it to count for nothing. What are the scenarios we might wish for to bring about change?

Wishful thoughts indeed. But some could be ‘runners’. Others are waiting to be mentioned.