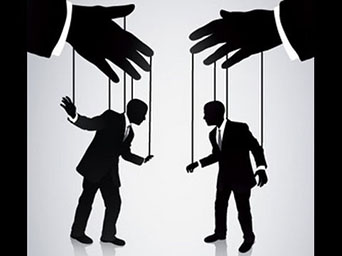 Presidential Puppetry by Andrew Kreig (Eagle View Books 2013 )is a comprehensive expose of the wealthy corporate interests who are the real power behind the federal government. Kreig orients his book around Obama and Romney, the major presidential candidates in the 2012 elections. However in discussing Mitt Romney’s hidden ties to the financial oligarchy, he also explores the Bush family’s Wall Street connections, the history and structure of the Mormon Church (especially as it relates to corporate America) and Karl Rove’s role in orchestrating Republican dirty tricks and voting fraud.

Kreig, a lawyer and respected Washington DC journalist, takes the 2012 presidential debates as his point of departure, noting the deliberate secrecy of both candidates around their personal background. This deliberate secrecy should have been a campaign issue. Yet neither raised it in the debates – there seemed to be a gentleman’s agreement not to do so. Kreig is also scathingly critical of the mainstream media’s failure to challenge either the secrecy or corrupt corporate influences it concealed.

For his part, Obama refused to release any of his university transcripts, as well as having his passport records secretly scrubbed at the State Department. According to Kreig, this refusal to release educational records is unprecedented, especially for a candidate with virtually no public record of their political background or views.

Kreig believes there are two reasons for Obama’s secrecy about his records from Occidental College, Columbia University and Harvard Law School. The first was to conceal his early links to the CIA, via a CIA front organization he worked for called Business International Corporation (BIC). The second was to hide his early “grooming” for political office by Zbigniew Brzesinski and possibly other members of Bilderberg, the Council on Foreign Relations (CFR) and the Trilateral Commission. All three are secretive round table groups that allow wealthy financial elites access to major public officials.

By tracing the background of the Bush, Carter, Clinton and Reagan presidencies, Kreig makes a very compelling case that the ruling elite selects and grooms individuals it offers up to us as presidential candidates.

Of our past five presidents, only George W Bush has no documented history of working for US intelligence. Krieg alleges Reagan secretly passed information to the FBI about Hollywood leftists, Bush senior performed various services for the CIA as founder and director of Zapata Oil Company, and Clinton informed on anti-Vietnam War protestors as a Rhodes Scholar at Oxford.

Romney’s big secret was his tax returns. It’s standard for presidential candidates to release ten years of returns. What the Republican candidate sought to conceal, according to Kreig, was systematic tax avoidance that included a Swiss bank account and tax shelters in the Cayman Islands. Both the Democrats and the corporate media failed in their duty to the public by refusing to bring any of this to light.

Broken Campaign Promises and a Trail of Bodies

Kreig goes on to examine Obama’s first term in light of his hidden history. The American people thought they were voting for a progressive community organizer but ended up with someone even more pro-Wall Street and pro-war than his Republican predecessor.

The most disturbing aspect of the book relates to cases Kreig details in which both Republican and Democratic insiders have tried to expose corporate interference with specific federal office holders. Largely owing to the refusal of the corporate media to support these whistleblowers, many have ended up dead under suspicious circumstances or in prison on trumped up charges.

Kreig tries to finish on an optimistic note by reminding us of all the brave independent journalists (on whose work Presidential Puppetry is based) whose investigative work is beginning to give us a true picture of how our so-called democracy really works. He encourages people (I assume he means whistleblowers) to send him tips (i.e. leaks) via his Justice Integrity Project website.

A recent post there is a moving tribute to the late John Judge, past president of the Coalition on Political Assassinations. The latter archives and promotes scholarly research offering alternatives to official accounts of the JFK assassination and other high profile political deaths, including those of Robert Kennedy, Malcolm X and the Rev. Martin Luther King Jr.