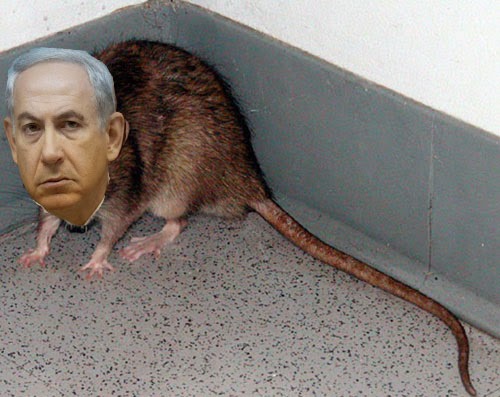 Israel is strong, mighty, invincible. Israel has truckloads of nuclear weapons. Israel has cluster bombs, DIME munitions, white phosphorous, and other illegal or experimental weapons with which it can kill and maim as many Palestinian civilians as it likes.

Israel is especially proficient at mass-murdering children. Israel constantly reminds us that it can exercise the “Samson option” and drop nuclear weapons on the capitals of Europe and the Middle East. Israel has even colonized America, the world’s most powerful nation, exacting billions of dollars a year in tribute. What a stunningly prepotent entity! The world stands in awe of the great and terrible Israel.

That, at least, is what the Israelis would have us believe.

But it is just an illusion. Israel is not behaving like a confidently powerful nation. Instead, it is desperately lashing out like a cornered rat in the final throes of rabies.

Israel’s genocide against the people of Gaza is sparking a seismic shift in world public opinion. Former New York Times journalist Philip Weiss, a noted Jewish critic of Israel, recently wrote: “There are more signs today that what the Israeli assault on Gaza in 2008-2009 did for the left, the latest assault is doing for the mainstream: solidifying a perception that Israeli leadership has lost its moorings, opening the floodgates of criticism.”

Netanyahu’s decision to crucify Gaza has backfired. Israel has attained none of its announced strategic objectives: It cannot destroy Hamas, cannot stop the rocket fire, cannot stop Gazans from digging tunnels. In short, it cannot stop the Palestinian resistance from building on Hezbollah’s accomplishments in its 2006 victory over Israel.

Nor can Israel attain its unannounced strategic objective, which was to destroy all prospects for Palestinian unity. Netanyahu had apparently hoped that when Israel slaughtered Palestinian children, the Palestinians would blame Hamas. Instead, the Palestinians (and the world) blame Israel. After all, it is Israeli soldiers who are murdering and maiming their children. Every last bit of Zionist-inflicted suffering elicits more strength and determination to resist Zionism by any means necessary, and to support whoever promises to fight the Zionists the hardest. And that goes for people all over the world, not just in Palestine.

University of Victoria professor John Dolan, writing under the pseudonym of “war nerd” Gary Brecher, recently republished views from a few years ago that are even more true today:

“Israel may win this battle, but it’s lost the war already…(In 2009) they killed 1400 Palestinians, and it didn’t do much but make everybody sick to their stomachs…In a situation like this, the real winner is likely to be the Gazans…Israel had lots of chances to deal with (the Palestinians) but they had a mandate—nothing worse than a mandate—and didn’t need to make a deal with anybody. Now it’s too late. There isn’t always a good solution at this point in the game. Maybe ten moves back you could’ve won, but not now.”

Most other strategists agree, though not all have the courage to say so in public. Former National Security Advisor Zbigniew Brezekinski says Netanyahu “is making a very serious mistake…he is isolating Israel. He’s endangering its longer-range future.”

What longer-range future? asks another legendary National Security Advisor, Henry Kissinger. In a 2012 interview with the New York Post, Kissinger made the following blanket statement:

Even Israel’s most rabid supporters admit that it is failing in Gaza. Neocon Zionist Jeffrey Goldberg admits as much in his article “Why Is Israel Losing a War It’s Winning?” Goldberg’s attempts to answer his own question are preposterous; he lashes out like a cornered rat at Hamas, at the world’s Muslims, at anyone who is “anti-Semitic” enough to oppose Israel’s ongoing genocide.

And genocide it is. Even the Zionists admit it. Yochanan Gordon spoke for the vast majority of Israeli Jews, and their supporters around the world, when he published an opinion article in Friday’s edition of The Times of Israel openly advocating genocide. Gordon’s article, entitled “When Genocide Is Permissible,” is far more extreme and revolting than anything Adolf Hitler ever wrote.

As Turkish Prime Minister Erdogan said last week, “Those who condemn Hitler day and night have surpassed Hitler in barbarism.”

Some Zionist rats are lashing out at Obama and Kerry. They believe the American President and Secretary of State are sending the wrong signals by not supporting Israel’s assault on Gaza with sufficient fervor. That is one of the main reasons Israel is losing in Gaza, according to Jeffrey Goldberg. He accuses Kerry of “indulging” Hamas.

Other Zionist rats may not be just blaming Obama and Kerry, but actually conspiring against them. Last year American Zionist Andrew Adler, editor of the Jewish Times, published an editorial calling on the Israeli Mossad to kill President Obama. Many Zionists are probably entertaining the same notion today – despite the fact that Obama has exerted even less actual pressure on Israel than previous presidents did.

Once again, the cornered rats are lashing out at the wrong target. Israel’s real political problem in America is not Obama himself, but the young people who voted for him. Israeli journalist Peter Beinart just published an article in Ha’aretz headlined: “On Gaza, Israel is losing the Obama coalition. As America grows less nationalistic, less hawkish, and less religious it will grow less sympathetic to an Israel defined by exactly those characteristics.”

Beinart notes that Israel’s American supporters are gradually dying off: “According to Gallup, while Americans over the age of 65 support Israel’s actions by a margin of 24 points, Americans under 30 oppose them by a margin of 26 points.” It seems inevitable that in the not-so-distant future, the US – Israel’s lone supporter on the world stage – will turn against the Zionist entity. When that happens, Kissinger’s prophecy that Israel will cease to exist will be fulfilled.

Israel’s leaders know that time, history, and demographics are working against them. They know that apartheid South Africa, a racist regime that was not nearly as vicious or genocidal as Israel, was erased from the pages of time by a changing current of global public opinion very similar to today’s rising tide of anti-Zionism.

The rats in Israel have their backs to the wall. They are cornered, and they know it. And as they blindly lash out in useless fury by mass-murdering ever-increasing numbers of helpless women and children, they are simply hastening their own inevitable demise.