Home World America: Who Is The Boss? 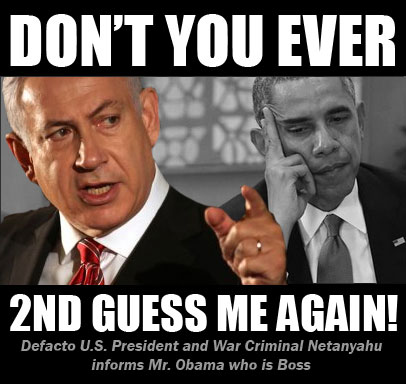 When 65,915,795 Americans and I voted for Barack Obama for a second term we did not know we were electing a second banana and we thought we were voting for the President of the United State, the most powerful man in America if not the world, certainly not voting for Bibi Netanyahu.

Over the last few years we should have known better that this president is “proxy” president, told what to do and what to say by his handlers, mostly dual nationals Zionist.

Well few days ago, Bibi Netanyahu the Prime Minister of Israel finally settled the issue and confirmed that he Bibi is the Boss not Barack Obama who occupy the Oval Office.

In a very clear message to Obama, Bibi reminds him and the American people as to who is the real boss, home and abroad, when he admonished Obama telling him and his American ambassador in Tel-Aviv,

“ Don’t You Ever Second Guess Me Again”

Moreover Bibi also have unconditional and total support from the American media… from CNN, MSNBC, ABC, CBS, Fox News, Washington Post, New York Times, Los Angeles Times, also among many of the popular TV and radio hosts in addition to major Christian Evangelical Zionists churches something that poor President Obama does not enjoy and could never have.

Bibi Netanyahu tells the American people that the real and true power is not Washington but Tel-Aviv and it is not President Obama but the Prime Minister of Israel Bibi Netanyahu. Israel rules Washington.

Well Mr. President you have certainly outdone your self when on queue you gave the criminal thug and liar Bibi full and unconditional support and accused Hamas of “savage violation” of the humanitarian ceasefire when you accused it of the kidnapping of the Israeli officer, when in fact Israel was hiding from you and Ban Ki Moon this death as a way to prolong the fight and break the ceasefire.

Both of you jumped the gun and wrongly accused Hamas of violating the truce, demanding the immediate release of the Israeli officer and chose not to say anything about the thousands of civilians who are slaughtered every day. Bibi informed you that he would continue with his operation notwithstanding any “humanitarian” truce reached, yet you blamed Hamas for every thing.

Ah, well, may be your Noble Peace Prize will be added to the bloody Noble Peace Prize awarded to Kissinger, to Rabin, Peres and Begin. Funny but all four of them are Zionist Jews, killers and murderers. Join the shameful winners.

I really hate to bring this topic up, but when Obama instructs our Ambassador in Tel- Aviv Robert Shapiro to go and give and present the president condolences to the family of the dual Israeli-American soldier who died while killing and murdering Palestinians, President Obama was sending the wrong message to the American people and its young. Go fight in the Israeli army and America will support you. I wonder why any one wants to join the American military and fight for this country?

Would he President Obama instruct his ambassador to Paris, Berlin, Rome, Islamabad and Baghdad to give condolences to the families of Americans who die fighting for another country, I doubt it. But then Obama appointed a veteran of the IDF to be his first prime minister.

Note: The President Chief of Staff in the US serves a similar function as a Prime Minister in a country like France… it is the second most powerful position in the US with the VP a distant third.