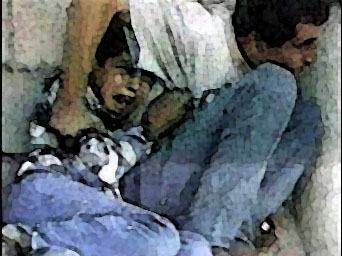 Our ‘Three Stooges’ must go

What’s the latest score in this shoot-fish-in-a-barrel spectacle enjoyed by beer-swilling Israelis in deckchairs from the hills overlooking Gaza? 460 Palestinian children and 250 women murdered… 1,938 souls exterminated altogether so far.

Not only that, but nearly 2,900 little ones are injured or maimed. Half a million people have been cruelly displaced, their homes reduced to rubble. All are starving and thirsty and lack the most basic necessities.

The hideous thing is the response – or lack of it – from Britain’s leaders. They are unmoved in spite of Britain’s primary responsibility for creating this tragedy. Where is the anger, the passion, the determination to ACT?

We know about David Cameron, our inglorious prime minister. In some quarters he’s called Agent Cameron owing to his declared Zionist affiliation and unswerving adoration of the Jewish state. “I am a passionate friend of Israel – and that’s the way it’s going to stay,” he told a Conservative Friends of Israel lunch.

And addressing Israel’s Knesset he pledged to defeat any boycotting of Israel. “Britain opposes boycotts,” he stupidly said without having consulted the British people on the matter and ignoring the rapid growth of the BDS (Boycott, Divestment, Sanctions) movement. Cameron’s other suck-up remarks to Israel’s rulers include:

According to the Jewish Chronicle  http://www.thejc.com/news/uk-news/113527/cameron-reassures-british-jews-over-iran-nuclear-deal , Cameron assured Jewish leaders: “I am with you and with the Israeli people, genuinely. As far as I’m concerned, an enemy of Israel is an enemy of mine. A threat to Israel is a threat to us all.”

This readiness to be influenced by a foreign country – and a rogue one at that –  is unbelievable from a man whose first loyalty is supposed to be to the British people and their interest. He has to go.

The Labour leader, Ed Miliband, criticised him for his “silence on the killing of innocent Palestinian civilians caused by Israel’s military action”. The reply from the Cameron camp was shock that Miliband would “play politics with such a serious issue”.

Miliband tried to score points by saying that Cameron was right to call Hamas an appalling terrorist organisation https://twitter.com/StewartWood/status/495609151599677441 .

But, he said, Cameron’s silence on the killing would be “inexplicable to people across Britain and internationally”.

Miliband, however, seems far more concerned about israel’s welfare than the slaughter of Gaza’s innocents. He said Israel’s military action will increase future threats to its security, while the “wholly unjustified” rocket attacks and tunnels showed Hamas’s “murderous intent”.

“I am a supporter of Israel and I believe in Israel’s right to self-defence… The escalation of violence engulfing Gaza… is losing Israel friends in the international community day by day.”

Anyone who thinks the right of self-defence extends to the brutal occupier whose helpless victim puts up as show of defiance is not welcome here and will have to go.

The biggest disappointment is Nick Clegg, the Liberal Democrat leader and deputy prime minister in the coalition government.

“It is time for the Israeli government to talk to the Hamas political leadership in Gaza,” he wrote in The Guardian. “I know I will receive letters and emails arguing that Israel should not reward terrorists with talks.”

Clegg suggested Israel could surprise the world with “an unexpected act of political magnanimity” which would help drive a wedge between the political and military wings of Hamas and garner Israel international support.

Magnanimity is a strange word in a war crimes situation in which Israel’s military jackboot has been on the Palestinians’ throat for decades and any resistance is reviled, demonised and met with collective punishment of the foulest kind.

He once seemed to be his own man and in 2009 wrote about Gaza: “What has the British government and the international community done to lift the blockade? Next to nothing. Tough-sounding declarations are issued at regular intervals but little real pressure is applied. It is a scandal that the international community has sat on its hands in the face of this unfolding crisis.”

That was provocative stuff in pro-Israel Westminster. But after electoral good fortune catapulted him to the top, Clegg changed his tune. For example, in the wake of Israel’s murderous assault on the Mavi Marmara, he welcomed the appointment of Lord Trimble to Israel’s farcical inquiry into its own entrails, well aware that Trimble was a founding member of the new international movement “Friends of Israel Initiative”.

He attended a fringe meeting of his party’s Friends of Israel group with the new deputy Israeli ambassador, then came out with this statement

http://www.thejc.com/news/uk-news/41015/nick-clegg-we-got-it-wrong-israel : “Israel’s right to thrive in peace and security is non-negotiable for Liberal Democrats. No other country so continually has its right to exist called into question as does Israel, and that is intolerable. There can be no solution to the problems of the Middle East that does not include a full and proper recognition of Israel by all parties to the conflict.”

This is a far cry from the guiding principles set down in the Preamble to his own party’s Constitution, a very fine document indeed especially where it says:

“We champion the freedom, dignity and well-being of individuals… Our responsibility for justice and liberty cannot be confined by national boundaries; we are committed to fight poverty, oppression, hunger, ignorance, disease and aggression wherever they occur and to promote the free movement of ideas, people, goods and services.”

So what has the coalition government, of which you are deputy leader, Mr Clegg, done to lift the Gaza blockade?

This morning brought news of Baroness Warsi’s resignation from the government. In her farewell letter Sayeeda Warsi, Senior Minister of State for Foreign & Commonwealth Affairs, said: “Our policy in relation to the Middle East Peace Process generally but more recently our approach and language during the current crisis in Gaza is morally indefensible, is not in Britain’s national interest and will have a long term detrimental impact on our reputation internationally and domestically.”

She added that the government’s approach to the current conflict was inconsistent with our values, specifically our commitment to the rule of law and long history of support for international justice.

She also suggested the Israeli government should face international trial for alleged war crimes, but feared the British Government would not support that position.

This lady has done the honourable thing – a rare event in British politics – and deserves all respect! Her departure, with grace and style, will likely be followed by serious ructions in the Conservative Party, which may then spread. The Telegraph reported that according to Clegg it was an “open secret” that there were “different opinions” among ministers “in reaction to bloodshed in Gaza”.

But I have just watched on TV two pompous-twit Conservative cabinet ministers commenting on Warsi. They are either mentally challenged or just don’t get it.

Clegg said that despite being a self-proclaimed Zionist, he regards the Israeli action in Gaza as “ugly disproportionate and tragic” and will harm Israel in the long-term. http://www.telegraph.co.uk/news/worldnews/middleeast/gaza/11012530/Baroness-Warsi-resigns-from-Government-over-Gaza.html  This is the first I’ve seen in print that Clegg is wedded to the Zionist cause, although his words and inaction have suggested it for some time it.

The Guardian reported his reaction to the Warsi resignation and whether he thought Cameron had been critical enough of Israel’s actions: “Clearly the prime minister and I take different views on this and we always have done.… I tend to take a very forthright view and I have long argued [that] the European Union, which is an economic giant in the region, acts like a bit of a pygmy. If the EU were to act with some courage it could have exercised greater influence on this terrible blood-raged conflict, instead of constantly sub-contracting international policy issues to the United States.”

So he gets some things right.

But at the end of the day the three leaders are three of a kind… three stooges of a very nasty foreign power and a severe embarrassment to the British people. They all must go. The growing BDS molvement, hopefully, will help them on their way.