Home Government What if the Children Dying in Gaza were Jews?

Let us for a moment imagine that Barack Obama ( USA), Angela Merkel ( Germany), David Cameron ( England), Stephen Harper ( Canada), Tony Abbot ( Australia), Froncois Hollande ( France) and Manuel Valls ( France) wake up from  deep sleep and regain conscientiousness and wake up to discover that the children killed in Gaza were Jewish children. What will they do, go back to sleep or wake up and do something, you decide! – Sami Jamil Jadallah

What if the Children Dying in Gaza were Jews?

By Robert Bonomo of The Cactus Land….

Let’s do a thought experiment and imagine that the Arabs had gotten the better of the Israelis in the 1948 Arab–Israeli War and after years of conflict, all that was left of Israel was the Gaza strip.

Assume for a moment that instead of Palestinians, over 1.8 million Jews were crammed into the 11 mile Gaza strip and the state of Palestine, subsidized and supported by a superpower, was administering the calories to the Jews in Gaza, keeping them to a limit of 2,300 a day. 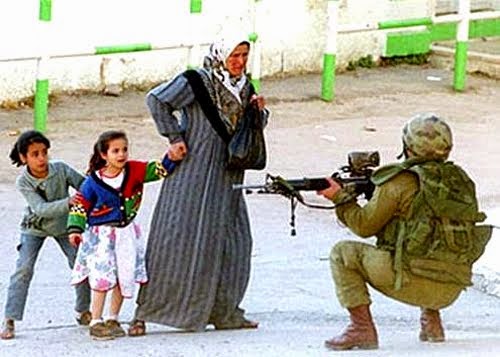 Imagine that instead of Palestinian children, it was Jewish children living under a Palestinian embargo that denied them toys, books, music and until a few years ago, even pasta. How do you think the world would react? Imagine if it were Palestinian commandos who had assaulted a peaceful cargo ship attempting to break the embargo to bring supplies to Jews in Gaza, killing nine, including one American. Do you think 85 US Senators would have signed a letter supporting the embargo on Gaza and the deadly attack on the cargo ship if that ship had been on a humanatarian mission to help Jews in Gaza? 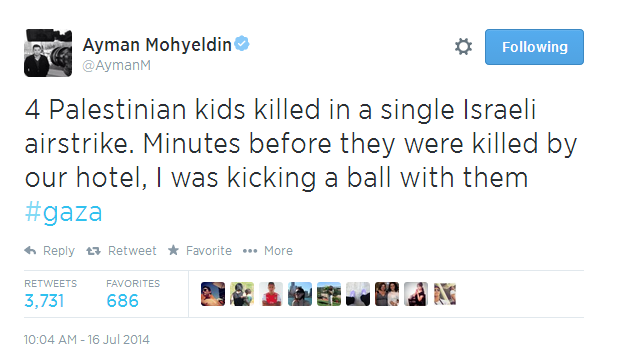 NBC correspondent Ayman Mohyeldin reported first hand the death of four boys playing on the beach in Gaza. “The attack – and its heartrending aftermath – was witnessed by NBC News. Moments earlier, the boys were playing soccer with journalists on the beach. The four victims were named as Ahed Atef Bakr and Zakaria Ahed Bakr, both 10 years old, Mohamed Ramez Bakr, 11, and Ismael Mohamed Bakr, 9.” Ayman Mohyeldin, who is Egyptian-American, was later ordered by NBC to leave Gaza.

Glenn Greenwald reported that, “numerous NBC employees, including some of the network’s highest-profile stars, were…indignant,” and that Mohyeldin had been removed from Gaza allegedly due to pressure from Neo-con quarters which claimed Mohyeldin had been soft on Hamas.

It’s almost impossible to imagine that Mohyeldin would have been replaced if he had been reporting on the death of four Jewish youngsters at the hands of a Palestinian gunboat. What we see repeatedly in Gaza is how the media values Palestinian lives differently than Israeli ones.

The day after the attack, Samantha Power, US ambassador to the United Nations, began her comments this way:

“The United States is deeply concerned about the rocket attacks by Hamas and the dangerous escalation of hostilities in the region. In particular, we are concerned about the devastating impact of this crisis on both Israeli and Palestinian civilians.”

It’s unimaginable that if a Hamas rocket had landed in a park and killed four Israeli children that Ms. Power would have begun her remarks this way:

As reported by MSN, CNN reporter Diana Magnay was removed from Gaza because:

“Magnay was reporting live on the air as a group watched the Israeli bombardment of Gaza around her. After the report was over, she wrote on Twitter: ‘Israelis on hill above Sderot cheer as bombs land on #gaza; threaten to ‘destroy our car if I say a word wrong.’ Scum.’ CNN said in a statement Friday that Magnay was referring specifically to those who threatened her. CNN said the network and Magnay are sorry if anyone was offended. The network said Magnay has been reassigned to Moscow.”

If the people on the hill above her had been Arabs cheering on a Palestinian artillery battery hammering Jews, would Ms. Magnay have been reassigned to Moscow for calling those who threatened her ‘scum’? Unlikely.

World renowned Israeli novelist Amos Oz, who supports the war calling it “justified, but excessive”, asked the following questions during an interview to explain why he supports the Israeli offensive:

QUESTION 1: What would you do if your neighbor across the street sits down on the balcony, puts his little boy on his lap, and starts shooting machine-gun fire into your nursery?

QUESTION 2: What would you do if your neighbor across the street digs a tunnel from his nursery to your nursery in order to blow up your home or in order to kidnap your family?

Maybe the question for Mr. Oz should be: What would you do if your entire neighborhood was forced to live in a giant outdoor prison where your children were denied books, toys and forced to live on a bare minimum of calories? Would you fight back? Would your rhetoric become extreme?

Over 400 hundred Palestinian children have been killed during the current fighting in Gaza, children who during their short lives had been denied the basic necessities for having committed the crime of being born in the land of their ancestors. No one had more of a right to live in Palestine than did those children, yet Bob Scheifer of CBS News said the following:

“In the Middle East, the Palestinian people find themselves in the grip of a terrorist group that has embarked on a strategy to get its own children killed in order to build sympathy for its cause – a strategy that might actually be working at least in some quarters.”

Scheifer can only blame the Palestinians for ‘provoking’ the IDF.

Of course in Europe, the coverage is somewhat more balanced, but Roger Cohen of the NY Times let’s us know what’s behind that. He begins by quoting poet James Lasdun, “There is something uncannily adaptive about anti-Semitism: the way it can hide, unsuspected, in the most progressive minds.” Then Cohen continues, “…the war has also suggested how the virulent anti-Israel sentiment now evident among the bien-pensant European left can create a climate that makes violent hatred of Jews permissible once again.” What Mr. Cohen is saying is that if one applies the full measure of moral outrage towards the Israeli slaughter of children, as the Europeans are doing and the Americans refuse to do, then you are toying with anti-Semitism of the National Socialist variety.

A good example of Cohen’s logic at work was when Jimmy Carter used the word ‘apartheid’ to describe the situation in Gaza and was branded “dangerous and anti-Semitic” for simply stating the obvious.

While there has been some limited criticism from the United States regarding the Israeli invasion, no one should doubt who is calling the shots in the US/Israeli relationship. During the last conflict in Gaza in 2009, Condolezza Rice was going to vote for a UN resolution calling for a cease fire but Israeli Prime Minister Ehud Olmert would have nothing of it. He explained what happened in a speech:

“When we saw that the secretary of state, for reasons we did not really understand, wanted to vote in favour of the UN resolution … I looked for President Bush and they told me he was in Philadelphia making a speech. I said, ‘I don’t care. I have to talk to him now’. They got him off the podium, brought him to another room and I spoke to him. I told him, ‘You can’t vote in favour of this resolution.’ He said, ‘Listen, I don’t know about it, I didn’t see it, I’m not familiar with the phrasing.’ He gave an order to the secretary of state and she did not vote in favour of it – a resolution she cooked up, phrased, organised and maneuvered for. She was left pretty shamed and abstained on a resolution she arranged.”

Who decides when a child deserves books, toys, and pasta or is better served by an artillery barrage? Mr. Netanyahu and his accomplices in the American government and media have no doubts about who deserves what.

Robert Bonomo of the Cactus Land.