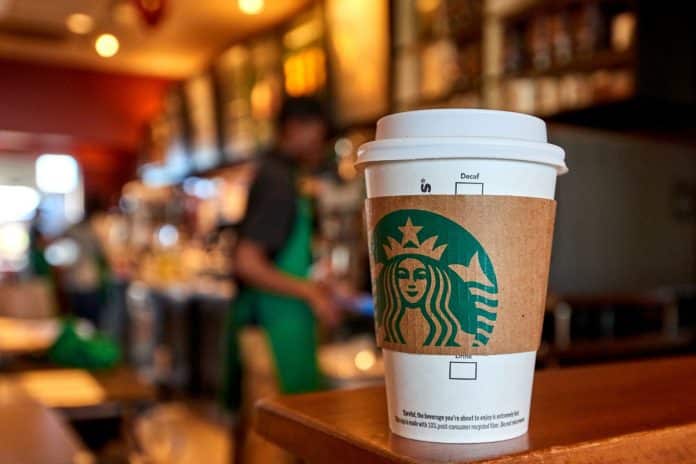 Today, the Huffington Post gave us an interesting article titled “Starbucks: We Don’t Give Money To Israel” claiming STARBUCKS COFFEE does NOT fund Israel.. Why are we getting this from them?

Well, first Starbucks is under attack for its owner Howard Schultz and his direct involvement in the media attack on the USA by his Zionists gang.  And the Boycott Divestment and Sanctions movement (BDS) is getting major traction around the world threatening the very existence of Starbucks as a company for the global people. 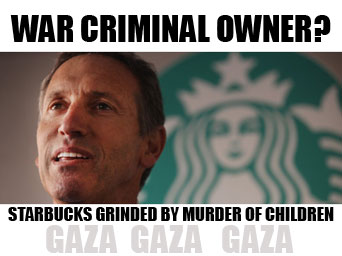 So Starbucks felt the need to post its “WE DO NOT…..” statement to ward off a BDS effort against it and its owner.  In short, this PR move is a pre-emptive pro-active action to convince us that Starbucks is NOT standing with apartheid, murder, war crimes and the criminal gang that is Zionism.

First,  why Huffington Post?  Well, it should be disclosed that Schultz’s son Eliahu Jordan Schultz works for HuffPost.  That may be the connection.  We have no confirmation of such but it is convenient, right?  It makes one think?

Second, it is true that STARBUCKS CORP does NOT give direct money to Israel.  But that is just structure semantics.  The fact is that their owner and Chairman Howard Schultz do and more!

In 1998, the Jerusalem Fund of Aish HaTorah gave him “The Israel 50th Anniversary Friend of Zion Tribute Award” for “playing a key role in promoting a close alliance between the United States and Israel.” In 2002, Israel’s Foreign Ministry praised him for being key to the country’s long-term PR success, through his provocative speeches accusing Palestinians of terrorism, calling intifada resistance anti-semitism, asking Americans to back Israel against a common enemy, and sponsoring fundraisers for Israeli causes.

It is noted that Schultz has made NO statement about ISRAELI war crimes and murder of children.   In this writes eyes, silence is complicity.  And because Schultz uses all profits from Starbucks to support war crimes, we must send a message to STARBUCKS and boycott!

We do NOT accept this pure public relation pro-active gambit to get BDS off the Starbucks trail.  It is Schultz’s fear of BDS that clearly has prompted this effort.  He needs to deflect the global anger from his criminal work away from his profit and funding center so he can continue his role as a defacto General in the criminal army..

In lieu, I demand Howard D. Schultz make a genuine 360 to save Starbucks and come out publically against murder of people.  No winking allowed.  He cannot pull a Phony Peace Prizer Obama who, under pressure,  said he condemns the murder of civilians, winks and then sends them over $ 1 billion to murder more.

Schultz must STOP FUNDING A CRIMINAL version of ISRAEL and advocate for the prosecution of war criminals and their conviction.  Then after we clean up Israel from these psychotic predator maniacs, then with a reformed Team People Schultz, we can all stand with Israel.

But if Schultz cannot get there then he should resign, join the IDF, and go murder children openly instead of hiding behind the cloak of our cup of coffee!  Maybe he can sell Starbucks and join his fellow bigoted Zionist Donald Sterling as a pariah against Team People.