Home World Israel-US has interupted its slaughter in Gaza only to press forward with... 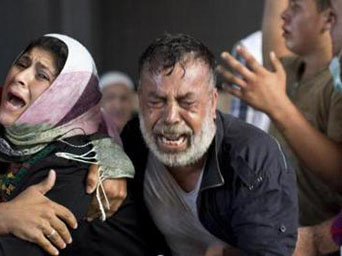 Israel’s long-term goal is to cleanse all of the territory that it militarily controls, by whatever most-efficient means it can get away with, which is facilitated and funded by the USA.

Since 1948, the name of the game is genocide, and this is no secret. Israel’s plans have been explicitly expressed and Israel’s genocide against Palestinians follows exactly the pattern of Canada’s genocide against First Peoples, except that it is in full-throttle rather than being in end-phase as in Canada [1].

Article 6 Genocide For the purpose of this Statute, “genocide” means any of the following acts committed with intent to destroy, in whole or in part, a national, ethnical, racial or religious group, as such: (a) Killing members of the group; (b) Causing serious bodily or mental harm to members of the group; (c) Deliberately inflicting on the group conditions of life calculated to bring about its physical destruction in whole or in part; (d) Imposing measures intended to prevent births within the group; (e) Forcibly transferring children of the group to another group.

In the latest slaughter in Gaza, Israel again targeted civilian infrastructure and again targeted the civilian population — following the School of the Americas doctrine of killing the resistance by killing the population that supports the resistance. No wonder Latin American countries were the most active in applying diplomatic sanctions against Israel: their own populations have been brutally and repeatedly assaulted by the same criminal methods of the same US-Empire that is now exterminating Gazans. The “reason” for Israel’s genocide is tied to Israel’s geopolitical role in the service of the US-Empire; to control, divide, and weaken the Arab World in order to prevent emergence and independence from the Empire [2]. Israel-US has finally decided to stop this round of the slaughter in Gaza, for now. Next it will apply the most vicious blockade that Gaza has ever seen, unless we stop it. And, again, it has made this explicit [3]:

“What we want to do is support the Palestinians and their desire to improve their lives and to be able to open crossings and get food in and reconstruct and have greater freedom,” US Secretary of State John Kerry said. “But that has to come with a greater responsibility towards Israel, which means giving up rockets, moving into a different plane,” he said …

Recent Latin American history of violent oppression by the US-Empire has proven that for a resistance fighter to lay down his weapons before the US-oppressor is both to commit certain suicide and to commit one’s people to certain and total deprivation. Those fighters who have not learned this lesson will suffer the ultimate consequence, and Gazans know this perfectly well. In the words of Gazan Nasman Al-Ashi [4]: “We either live in dignity and free or we all die. … We either live free or we die here.” In this reality — a reality created by the US-Empire’s brutality — John Kerry’s words are diabolical. He is announcing the predictable next step in the continued crushing of the Palestinian Nation. …Destroy all civil and sanitary infrastructure, spread death and terror, then strangle with a blockade until the caged victims become susceptible to fractionation and deterioration…

The model has been repeatedly applied, in Libya, Iraq, Syria, and on and on. One problem is, Palestinians, and Gazans in particular, and their co-combatants in southern Lebanon, are remarkable freedom fighters, among the most valiant and tenacious that humanity has ever produced. They can only be stopped by a direct hit or by starvation, and they are exceedingly hard to hit and hard to starve. Another problem is that Palestinians are loved and admired in the entire World precisely because of their courage and determination against the Israel-US monster, and in contrast to the inhumanity of that monster that has been on display for the last month. In addition, Palestinian fighters have demonstrated themselves to be outstanding combatants since the previous assault on Gaza, and this time defended themselves by killing almost 100 invading IDF soldiers in intense close-range encounters. In the words of a major establishment intelligence firm [5]:

Hamas appears to be attempting to create the spectre of a continual potential threat to IDF ground units in Gaza, thereby undermining IDF morale. Hamas is also keenly aware of the impact of inflicting casualties on the IDF – not just in the Palestinian Territories and Israel, but in the wider Middle East region – and so it and the PIJ are striving to combine tactics and their geographical knowledge and advantage to inflict maximum casualties on the IDF.

A highly notable and successful example of this occurred on 19 July, when Izz al-Din al-Qassam militants lured a force from the IDF’s Golani Brigade into a minefield in the Shujaiya area of Gaza, before then attacking the unit’s Merkava Mk 4 main battle tanks (MBTs) and M113 armoured personnel carriers (APCs) with anti-tank missiles. Six IDF soldiers were killed in the attack, while a seventh soldier – Sergeant Oron Shaul – went missing. While Hamas subsequently claimed that Shaul was alive and had been captured by its fighters, Israel stated that the soldier was likely to be dead. A further six Golani Brigade soldiers were killed in separate clashes in Shujaiya on the same day, and the unit’s commander, Colonel Rasan Aliyan, was also wounded, underlining the intensity of the fighting.

It is precisely because Gaza and Palestine are so dedicated to their own self-defence, and are so valiant in opposing the vile US-Empire, that we must not allow Obama, Kerry, Netanyahu, Harper, Trudeau, Mulcair, and all the other thugs to strangle Gaza with a continued and more vicious blockade. The planned blockade announced by Kerry is part of the actuation of the on-going genocide and it is no less criminal than the direct slaughter itself. We must be as repulsed by the planned continued and augmented blockade as we were repulsed by the land invasion. And we must be as repulsed by Israel’s pathological refusal to accept an independent Palestinian Nation as we are repulsed by the blockade. The blockade must die now, and an independent and viable Palestine must be allowed. Endnotes

[2] “The Intended Roles of the Israel-Lobby and of Israel in the US-Empire are Incompatible with Peace” by Denis G. Rancourt,July 30, 2014; http://activistteacher.blogspot.ca/2014/07/the-intended-roles-of-israel-lobby-and.html

Denis G. Rancourt was a tenured and full professor at the University of Ottawa in Canada. He was trained as a physicist and practiced physics, Earth sciences, and environmental science, areas in which he was funded by a national agency and ran an internationally recognized laboratory.

He published over 100 articles in leading scientific journals. He developed popular activism courses and was an outspoken critic of the university administration and a defender of Palestinian rights.

He was fired for his dissidence in 2009 by a president who is a staunch supporter of Israeli policy. He is the author of the 2013 book “Hierarchy and Free Expression in the Fight Against Racism”.