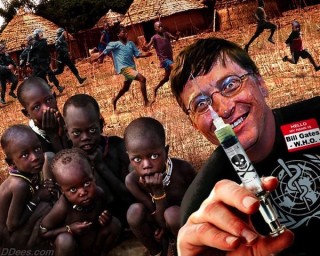 The mainstream media is hyping the “biggest ever” Ebola outbreak in West Africa.

We are told that the dread disease, which produces symptoms like something out of a horror movie, is spreading to the USA. Some Americans are canceling their vacations and refusing to fly, believing that they might catch Ebola on an airplane.

People are being terrorized by horrific images, fear of a quick and awful death, and fear of airplanes. The fears are out of all proportion to the reality of the threat. Where have we seen this before?

On September 11th, 2001, the American public was subjected to trauma-based mind control – an intensive form of the brainwashing technique known as coercion, described in a book by Douglas Rushkoff of the same name. Trauma-based mind control uses extreme fear or horror to shape the subconscious minds of its victims. It is a highly effective technique for making people submit to authority without realizing what they are doing or why.

In the autumn of 2001, we were brainwashed into believing that radical Muslims, using airplanes, anthrax, and who knows what else, were willing and able to kill large numbers of Americans. As a result, the US went to war against Muslim nations, persecuted Muslims worldwide, shredded the Constitution, threw away trillions of dollars, and risked moral as well as fiscal bankruptcy.

Since then, evidence that the 9/11-anthrax scare was a hoax has left many Americans sadder but wiser. Today, whenever the government and mainstream media begin terrorizing people with a hyped-up menace, knowledgeable observers ask themselves: Is this threat real? Or just another false flag?

In an exclusive interview with Truth Jihad Radio, Dr. Garth Nicolson, a leading expert in emerging diseases and biological warfare, suggested that the Ebola threat has been exaggerated due to the spectacular nature of the symptoms. Indeed, Dr. Nicolson suggested that it is precisely those spectacular symptoms, which show up very quickly, that make Ebola relatively easy to contain:

“If you have a vicious, highly lethal disease like Ebola, that gains a lot of attention. But you can isolate those patients immediately, and that contains the whole process.”

A spectacular disease that gains a lot of attention, but is incapable of killing a large number of people, is ideal for false-flag manipulations of public opinion. One of the leading indicators of a false flag is disproportion between the event’s massive public relations impact and the feeble reality of the alleged threat.

This pattern has existed for centuries.

In early 17th-century England, Robert Cecil’s war party wanted to launch an assault on the Spanish and Portuguese empires, but was constrained by the irenic policies of King James and some of his advisors, and by the recalcitrance of peace-loving public opinion. Since Spain and Portugal were Catholic countries, Cecil needed to convince his countrymen that they faced a terrifying “Catholic threat.” So he found a radical Catholic agitator, Guy Fawkes, put Fawkes and a few barrels of soggy gunpowder in a tunnel beneath the Parliament building, and had him arrested according to plan.

Cecil’s plot worked to perfection. From every Anglican pulpit in the land, preachers denounced the evil Catholic extremists who had nearly blown up the entire British government. The British public entered a state of anti-Catholic hysteria similar to America’s post-9/11 anti-Muslim hysteria. And Cecil got his war.

In fact, British Catholics had posed little or no actual threat to anyone. But due to the enormous public relations impact of Cecil’s gunpowder plot, the public was convinced that a wave of Catholic mayhem was washing over their shores.

The US government, like the British government, has repeatedly convinced its citizens to fear an exaggerated or nonexistent threat. In 1847 Washington fabricated a phony “Mexican invasion.” In fact, Mexico was much weaker than the US and posed no threat whatsoever. But frightening headlines stampeded Americans into war against Mexico, and Washington stole nearly half of Mexico’s territory.

In 1898 a fake “Spanish threat” was fabricated by the false-flag sinking of the U.S.S. Maine in Havana Harbor. In reality, Spain posed no threat to the US; being the weaker party, it wanted to avoid war. But once again, Americans were brainwashed into fearing a non-existent threat by a false flag attack. And once again, Washington used the ensuing hysteria to grab large swathes of territory for its bankers and capitalists to feed upon.

Prior to World War I, a nonexistent German threat to the US was manufactured by two public relations stunts: The forged Zimmerman Telegram that convinced Americans Germany was conspiring with Mexico to invade the USA; and the orchestrated sinking of the weapons-laden passenger liner “Lusitania.” Americans arose in hysterical fear of Germans – and went to war on behalf of the British and their Zionist financiers.

Washington and London also dragged the US into World War II through a fabricated threat. They used an Eight Point Plan that included cutting off Japan’s oil supplies to force Japan to attack the US at Pearl Harbor. The shocking, spectacular newsreel footage convinced Americans that they faced a horrific threat from Japan and its German ally. In fact, had the US simply remained neutral, it never would have faced any such threat.

In the 1960s, another nonexistent threat – this time from Vietnam – was fabricated to drag the US into full-scale war against that country. A fake Vietnamese attack on America, the famous Gulf of Tonkin Incident, was arranged.

These are just a few of the many examples showing that media-hyped public hysteria is almost always in service to a hidden agenda.

What might be the hidden agenda of the Ebola scare?

Researcher Anne Sullivan argues that an orchestrated Ebola outbreak in America could be used to “create a level six pandemic emergency that includes mandated vaccines, which will contain their patented weaponized Ebola.” This nightmarish worst-case scenario envisions the eugenicist faction of the global elite using a fake Ebola threat to create a real one.

With or without an actual threat, the US government could use the specter of an emergency pandemic to lock down Americans and remove the few remaining shreds of their Constitutional rights. President Obama recently signed an amendment to George W. Bush’s Executive Order 13295, which authorizes the “apprehension, detention, or conditional release of individuals to prevent the introduction, transmission, or spread of suspected communicable diseases.” Obama’s amendment broadens the order to allow the detention of unlimited numbers of Americans based on mere suspicion that they have a dangerous illness.

Why would the US government manufacture a disease threat, real or feigned, as an excuse for martial law and mass detentions? It might do so as a pre-emptive measure against the likelihood of popular unrest when the dollar collapses and the American economy implodes. Currently the BRIC nations, led by Russia and China, are pulling the plug on the US dollar, which is swirling with increasing rapidity as it prepares to go down the drain. When the dollar takes its final plunge, Americans will face the full consequences of their government’s squandering of trillions on the 9/11 wars. The likely result: A second American revolution.

If the US government can terrorize Americans with Ebola, militarize society, and lock up thousands or millions of people in concentration camps, it may be able to head off the revolution before it starts. That, at least, might be their plan.

But natural Ebola could not possibly create a pandemic in America. It is not easily transmissible, it lacks a long latency period, and it cannot survive outside the body except in extremely hot, humid temperatures.

So be forewarned: If the mainstream media reports an alleged Ebola pandemic in America, there are only two possibilities: Either they are lying, or they have created a synthetic, weaponized version of Ebola.

If that happens, we had better start the revolution…before they lock us up.