Ferguson, Mo is not about the militarization’s of America’s police force. It is and should be about the “Israelization” of America’s police force in equipment, training, ideology, perception and doctrine. The days of “to serve and protect” are long gone, given way to the new doctrine imported from Israel where “citizens” are the enemies, especially if they are Blacks, Hispanic, Muslims, Arabs or White Leftist and liberals. We have seen this transformation in the way the local police dealt with the “Occupy Wall Street” and how it dealt with the citizen’s protest in Ferguson, MO. 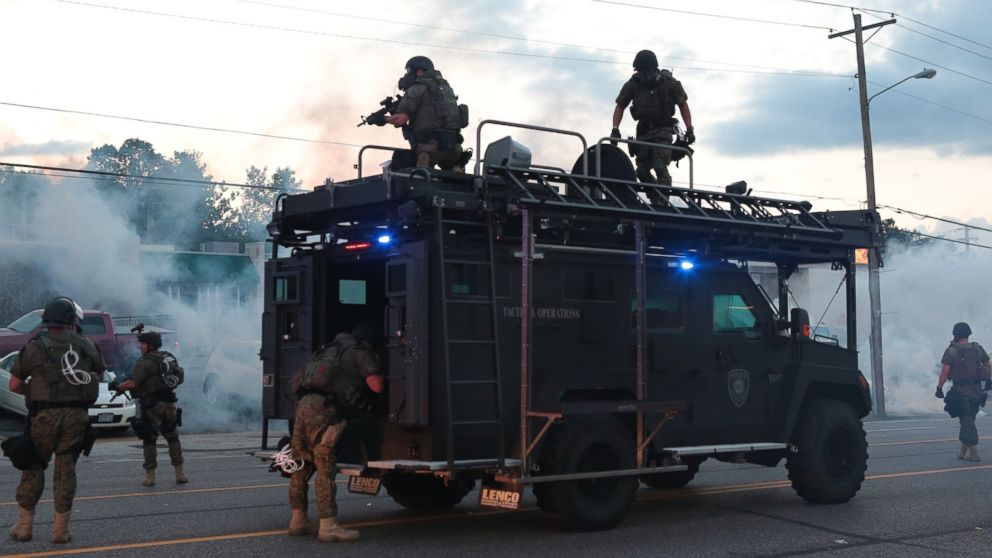 We should not be surprised with this massive earth-shattering shift in attitude, philosophy and doctrine. Michael Chertoff of Homeland Security, the ADL and Jewish Institute for National Security Affairs (JINSA) made sure that law enforcement agencies in the United States view citizens, all citizens as “potential terrorists” and should be dealt with as “terrorists”.

Americans are no more citizens with constitutional rights of free speech, free assembly, with the rights to petition governments, with rights against illegal search and seizure, Miranda and Fifth Amendment rights against self-incrimination. These rights do not exist and never existed In Israel especially to none “ Jewish” residents or citizens of the State of Israel, let alone the 4 million Palestinians Arabs under Occupation, who have NO rights whatsoever other than being potential and or terrorists.

JINSA through its Law Enforcement Education Program (LEEP) and with its high level connections in the White House, Congress, Defense and Homeland Security, arranged for the training of tens of thousands American law enforcement officer at the federal, state and local level. Both Douglas Feith and Richard Perle, former top Pentagon officials and key advisors to Bibi Netanyahu played a key role in the entire transformations of American’s police force from “to serve and protect” to “ hit and kill” just like the Israeli security forces.

“ The Israelis changed the way we do business regarding homeland security in New Jersey said Richard Fuentes, the Superintendent of the NJ State Police after a training session and a trip to sponsored by JINSA” and it sure did.

Max Blumenthal the American journalist best known for his insights into law enforcement agencies and its transformation writes “ During a 2004 LEEP trip, JINSA brought 14 senior American law enforcement officials to Israel to receive instruction from their counterparts. The Americans were trained in “how to secure large venues, such as shopping malls, sporting events and concerts,” JINSA’s website reported. Escorted by Brigadier General Simon Perry, an Israeli police attaché and former Mossad official, the group toured the Israeli separation wall, now a mandatory stop for American cops on junkets to Israel. American officials learned about the mindset of a suicide bomber and how to spot trouble signs,” according to JINSA. And they were schooled in Israeli killing methods and of course this includes “extra judicial killings no different from methods used by Israeli security agencies with impunity.

It seems Mr. Fuentes and tens of the thousands of officials and members of the police forces in the United States forgot a simple fact. This is the United States of America, and America is not an “Occupied Territories” with Apartheid Wall, barbed wires, separate roads for Jews and non-Jews, land theft an seizure, home demolition and marauding gangs of Jewish settlers. Unless we thing of Congress and the White House as an “Israeli Occupied Territories”. Here we are citizens, not an the “enemy” resident of “occupied territories.

The issues here in America is not “terrorism” as successfully marketed by Israel and its agents, but common every day crime from felonies (748,728) in 2012 to drunk driving fatalities (14,827) in 2102 to over 40,000 citations for DUI and domestic violence with more than 500 rape and assault cases every day and 30 deaths daily by gun violence. Terrorism based on mere facts and statistics is not and never was a factual issue but a political issue transforming America to a police state no different from Israel.

As such the entire shift of the American police doctrine from fighting common ground to fighting terrorism is ill advised and ill founded and undermines the very nature between American citizens and their local police force.

The ironic thing in all of this is the fact that Israel should be the last country to teach any one let alone the US about fighting terrorism since it is country established and founded on terrorism and has been practicing state terrorism way before its founding in 1948.

Israel is a country that used “terrorism” to exile millions and keep over 5 millions under military occupation and have treated all non-Jewish citizens as “enemies” subject to different law enforcement standards and procedures such as we saw in the death of the three settlers and the live burning of a kidnapped Palestinians at the hands of settlers.

A country that claims to have experience in fighting terrorism for over 66 years and continue to fight “terrorism” could hardly claim a success, no different than America’s teaching the world about “fighting drug wars” when in fact it has been doing for over 30 years and did not succeed. However the ADL and JINSA (together with free trips, wining and dinning and perhaps a Lewinski) succeeded in convincing law enforcement agencies that Israel is the best place to train and transform America’s police force.

Max Blumenthal and I quote” Karen Greenberg the director of Fordham School of Law’s Center on National Security and a leading expert on terror and civil liberties said the Israeli influence on American law enforcement is so extensive it has bled into street-level place conduct”. This Israeli toxic influence was instrumental in the extensive use of torture used as key component in the training of Iraqi and Afghanistan police forces, certainly it is seen in the very violent ways the police dealt with the “Occupy” protests.

Israel undue influence over America’s police and security apparatus in the United States has transformed the US from a country of laws and the rules of laws, to a country with every thing permissible, based on or have basis in “counter-terrorism”. These Fifth Columns within America made sure their influence extends beyond the Capital Beltway reaching far into the smallest of towns in America. Heads of local police who have not been invited on free trips to Israel are the exception.

Now America’s local law enforcements agencies and there are thousands have shifted their focus and doctrine from fighting common crimes to preparing and ready for a “civil war” in America. Discarding what they have been doing best for hundreds of years, keeping the peace, fighting crimes and corruption and “ to serve and protect”.

So next time any one of us think about going to the streets to protest the corruption and failings of America’s political, economic and financial leadership we need to think twice. We must see our self in “Occupied” Ramallah, Gaza, Jenin, and Hebron facing the Israeli security forces and not in New York or Toledo or Lansing. We will face an American police force that through free trips and training in Israel lost its American values and doctrine, and literally became an Israeli police force. ADL and JINSA have transformed America a country of citizenship and partnership with the police to a country we hardly know, a New America a country at war with its citizens.

Special Note: Without going into the “facts” on the murder of Michael Brown, and on the personal level, I do think that our local policemen, firemen, and teachers are underpaid for the work they do and did, and for the service they provide. And I hope the police will abandon the “Israeli doctrine” and go back to the American Doctrine of “ to serve and protect”. America is not and must not be at war with its citizens. We are a “Free Country” and not an “Occupied Territory”.