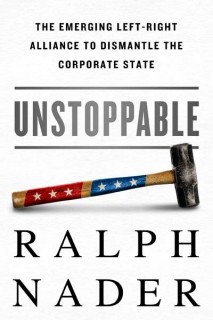 Nader’s new book has the intriguing title Unstoppable: The Emerging Left-Right Alliance to Dismantle the Corporate State. A long time consumer advocate, Nader has spent most of his career battling the corporate takeover of government and US society. Although most analysts place him to the left of the Democratic Party, he frequently allies himself with libertarians and populist conservatives in specific campaigns. He now maintains the only way to restore accountable Constitutional government is by forming what he calls right-left convergences.

Nader begins by defining what he means by “right” and “left,” as these terms have ceased to have any real meaning. He devotes an entire chapter to dispelling the common myths people from opposite ends of the political spectrum have about each other. He begins by discussing the philosophical architects responsible for the basic principles that underpin conservatism and libertarianism, with special emphasis on Adam Smith, Ludvig Van Mises, Frank Meyer, Russell Kirk and Peter Viereck. He goes on to trace links between contemporary conservatism and the 19th century populist movement in which farmers fought big banks and big railroads. This movement, commonly referred to as the “populist” or “decentralist” movement, would eventually evolve into Goldwater and Reagan conservatism. Nader maintains that many contemporary Republicans who call themselves “conservative” are really corporatists or corporate statists – working primarily for the benefit of the corporations who put them into office.

The US Left represents too many different tendencies – liberals, progressives, socialist, anarchists – to agree on a single overarching political philosophy.

Although Nader doesn’t mention it, many prominent figures identified with the so-called Non-Communist Left have been discredited by accepting major funding from CIA pass-through foundations.1

Nader identifies 25 potential issues that are ripe for collaboration between existing left and right-leaning movements (see below).2

He feels the biggest potential obstacle to potential is the knee-jerk ideological reaction of major party activists. It’s often hard to move Democratic Party loyalists past the tired knee-jerk reaction that conservatives are too narrow-minded, dogmatic and self-interested to be worthwhile coalition partners. Meanwhile many conservatives have the mistaken belief that all leftists are covert socialists who are only interested in big government, more welfare spending, more business regulation, more debt and and higher taxes.

Nader bemoans the tendency of ideologues from both ends of the political spectrum to get so focused in dogma and abstractions that they can’t lose sight of the constitutional crisis in front of them.

This is partly why left-right convergences tend to me more effective at the local level, where people are already shoulder-to-shoulder confronting the practicalities they face everyday. This is certainly consistent with what Susan Clark and Woden Teachout describe in Slow Democracy, their book on local direct democracy. It also reflects the the experience of the Community Environmental Legal Defense Fund (CELDF), which unites activists across the political spectrum in outlawing fracking, toxic sludge, factory farms and water bottling plants.

Unstoppable goes on to provide numerous examples of high profile right-left alignments in Congress (see below). 3

The main value of the book, in my view, is to remind us of the political power of strange bedfellow alliances and to discourage knee-jerk reactions to collaborating with people of different ideological persuasions. Since Unstoppable went to print, a left-right congressional convergence prevented Obama from going to war against Syria, and left-right convergences in Washington and Oregon passed ballot initiatives legalizing marijuana. 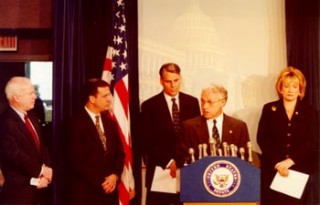 1Frances Stonor Saunders discusses this at length in her 1999 book Who Paid the Piper? The CIA and the Cultural Cold War.

2Personally, I think Nader’s list is too long. I myself would prioritize 6, 12, 14 and 22, as I already see evidence of left-right collaboration on these specific issues: