If you want government to intervene domestically, you’re a liberal.

If you want government to intervene overseas, you’re a conservative.

If you want government to intervene everywhere, you’re a moderate.

If you don’t want government to intervene anywhere, you’re an extremist. 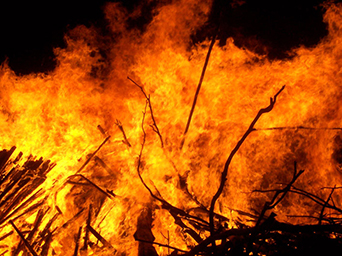 Governmental interference into the lives of citizens is Satanic intervention, by way of Satan’s minions. And who are his minions? Of course, they are the elected and bureaucratic officials of both the liberal and conservative stripe.

Governmental intrusion into our lives is enforced by our police departments that have become a unified standing army, despite federal laws that were written to prevent such a tyrannical phenomenon.

The government’s most intrusive laws, however, are presented to us cleverly and gradiently. Such is the case with Adrian Peterson’s indictment for negligent injury to a child.

A good “whooping” with a “switch” administered to a black or white misbehaving child has continued for decades in the South without any governmental complaints.

Then suddenly the application of corporal punishment to one’s own child has become a federal crime. Now we can expect that the corporate media to demonize Adrian Peterson for spanking his own son.

Next, the mega-corporations (owned by the International Banking and Monetary Cartel) will began pulling their advertising from Peterson’s team, the Minnesota Vikings … unless … the great running back is punished and punished severely. After all, it is the Cartel that is degrading our world with their social engineering.

Apparently, the government today considers the switching of a badly behaving child to be more deleterious to their well-being than American bombs, poisons, or police enforced indoctrination.

There is no way of knowing how many arms, legs, or heads that have been blown off of children by US “smart” bombs in the Middle East.

Football great Adrian Peterson faces two years in prison for disciplining one of his own children. What kind of punishment should be levied on our political and military leaders for burning thousands of children alive?

There is no way of calculating how many American children have been poisoned by governmental sanctioned fluoride, aspartame, GMOs, vaccines, and deadly mercury-containing dental amalgams.

What used to be a somewhat fairly sane government is now not content with only destroying the bodies of our children; it now also wants to destroy the minds of our children by telling them what to think with enforced attendance in public schools, better labeled as government internment camps.
Please note that the American central governmental bureaucracy, in a far away city (Washington, DC), requires our children to spend more time digesting their bizarre programs than receiving the love and discipline of their parents. The government has gone so far as to send in SWAT Teams into the houses of homeschoolers.

All of this is going on while pedophilia is being presented as normal. What is next? Encouraging zoophilia – having sex with animals?
For some incomprehensible reason, the world’s Controllers must desire a completely degraded earth. Insanity is not understandable, but most of us can recognize it when it is so obvious.

The ruthless, diabolical, controlling powers are, however, ingenious with their cunning. They arrested Adrian Peterson for several reasons. One: his notoriety. This sends a message. If the power structure will indict Adrian Peterson, they will certainly arrest me.

Secondly, Mr. Peterson was an ideal choice to kick off their “no spanking of children” reality adjustment of the American public. You see, Peterson is a built-in football enemy of many people in the thirty-one other large NFL cities who have to suffer Peterson’s athletic prowess against “their” team.
“If Peterson spanks his children, spanking must be bad.”

But on the tail of this seemingly small wedge into our traditional biblical belief of Spare the rod and spoil the child will come reams of mainstream propaganda the likes of which was spouted years ago by the petty minion Hillary Rodham Clinton: It takes a village.

Then we had MSNBC telling us that children do not belong to their parents, as the Bible tells us, but rather they belong to the community (read government … read Satan).

Spanking a child can be beneficial to the child. But spanking a child when you are angry, or in a fit of temper, is always wrong.
Seldom will anyone love a child more than their parents do.