Home Life Where have all the Flower Power Protesters Gone?

Where have all the Flower Power Protesters Gone? 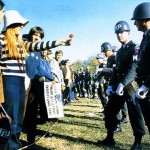 This past August the 45th anniversary of the Woodstock music festival took place, and I was so glad I did not have to see any news coverage of the event on the national nightly news. When the original three-day rock concert took place, I was serving my country in the Republic of South Vietnam. I had already been there for a year and would still have another 14 months left to serve in-country. In 1969, most of the baby boomers attending the event were anti-Vietnam war and many were anti-Vietnam Veteran and the majority of the males probably never served in the military, much less in the Vietnam War.

The protesters were the darlings of the news media and for the most part, Vietnam Veterans were the pariahs. Both the protesters and the media cited half-truths and falsehoods about the Veterans of the Vietnam War, which were then embellished about us to make those fighting the war look like psychotic baby killers.

Then beginning in the 1980’s, a number of positive changes started taking place in the United States which began the healing process between many Vietnam Veterans and citizens of this country. In 1980, a young actor by the name of Tom Selleck starred in a television show entitled, Magnum, P.I. Tom Selleck played private investigator, Thomas Magnum, who lived in Hawaii and with his buddies, all three being Vietnam Veterans that take on cases while enjoying living the high life on the islands.

What makes this television show so unique, it was one of the first Hollywood productions to make Vietnam Veterans look healthy, normal and not as misfits and killers. Hollywood had been stereotyping Vietnam Veterans since the beginning in movies and television as drug addicted killers and even after the war ended in April of 1975. The Smithsonian Institute recognized the show, Magnum, P.I., as the first show to portray Vietnam Veterans in a good light.

The Park Service is entrusted to provide maintenance for all the memorials in Washington, DC, but the Vietnam Veterans Memorial has many volunteers that help to ensure it is well taken care of and kept beautifully maintained. Many of these volunteers are Vietnam Veterans themselves and the family members of those men and women whose names reach out to us and etched on the black marble panels. An eerie silence embraces us as we see our reflection searching for those who will always be remember in their youth.

Hell No, We Won’t Go-It Did Not Matter If It Was Vietnam, Afghanistan, Iraq Or Timbuktu, It Was THE DRAFT

How many thousands of wannabe VietnamVeteran warriors have Vietnam Veterans encountered, read about or seen on the news that have tried to pass themselves off as one of the approximately 2.7 million men and women that did serve? When Vietnam Veterans began to experience the respect and admiration from many in the country, the draft dodgers and war protesters coveted the respectful attention. The spotlight was no longer on them, and they were no longer the focus of the news media. The self-righteous phony flower children that avoided serving in Vietnam begrudged the appreciative attention, and respect Vietnam Veterans were now receiving. Why? It exposed them, and they had to look in the mirror at what many were for the most part, cowards, selfish and hypocrites.

It made no difference whether our war was in Vietnam, Afghanistan, Iraq or Timbuktu. The majority of the baby boomer generation males that demonstrated against the Vietnam War because of the draft and were only doing so because they did not want to risk their personal safety and comfort.

There have been a number of wars and conflicts since Vietnam, have you seen those anti-war protesters during the Vietnam War out in the streets? No! Do you know why? Simply put, none of the subsequent military actions would affect them so why should they protest! Those same individuals that had the audacity to lecture us that did serve are now quiet, nary a peep, as the longest war in our Nation’s history still drags on, Afghanistan. The young Troops today still fight on with courage, all volunteers but where are the flower power protesters of the Vietnam War? The United States in now once again becoming embroiled in Iraq, a war based on nothing but lies in the first place.

George W. Bush and Dick Cheney, both eligible to fight in Vietnam and both conveniently avoided it, started the Iraq War, which has taken the lives of 3,527 Americans. Another 32,222 wounded on the battlefields, and thousands severely disabled which has altered their lives and those of their families forever. The anti-war baby boomers so vocal about the Vietnam War when they were threatened to serve, now worry over their 401k’s, the stock market and their favorite sports team. Why? Every military action after Vietnam had no effect on them, they were not threatened to serve.

If our war in Vietnam had not been an imminent risk to their future, their safety and personal comfort because of the draft and we had an all volunteer military like today, we would have never seen the Vietnam War protesters during the Vietnam War!

Vietnam Veterans Mistake Was Not Becoming Involved In Politics

The Vietnam anti-war movement was nothing but a bunch of selfish individuals that did not want to serve a cause greater than themselves. Many of them then went further and took out their misguided frustrations and anger against the very people that went to Vietnam to serve their country with honor and pride, the Vietnam Veterans. The big mistake Vietnam Veterans made is that many of us did not want anything to do with our government when we returned, and we failed to run for public office.

We left the Federal governments open, for the most part, to the draft dodgers and Vietnam War slackers, and we see what condition our Congress is in today! Corruption, stagnation, no cooperation and most Senators and Representatives with no military service, which means our military and veterans are not a priority to many of those on Capitol Hill. I urge our returning veterans today to seek out political office and make your voices heard for all of us that have worn a military uniform and for those still serving our country!

Put these Vietnam War, baby boomer draft dodgers, from my generation, and non-volunteer military dodgers, from your generation, out of a job by running for Congress. You have served your country in the Armed Forces, and your experience is invaluable, the older veterans need you now more than ever! The men and women that have served with you need you. Please do not make the same mistake many Vietnam Veterans did by refusing to have anything to do with the government that betrayed us!

Run for political office and take back the government from those that only want to enrich themselves and wrap themselves in the flag at their convenience! Today’s military, thank you for your service and dedication to our country. Vietnam Veterans will never abandon you like many of those that served prior to us did when they turned their backs as we returned home! Welcome Home!