Home World Middle East Tsunami and the Death of Israel 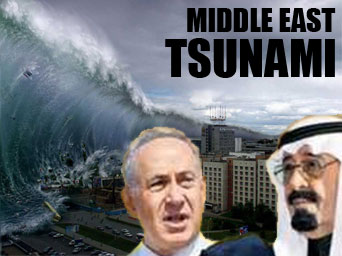 For the last 100 years, we the people have endured the consequences of geopolitical game plans that were concocted by men living in times that have no relevance to our modern world.

The current tragedy is that, in 2014, we still do NOT have an articulated grand vision that fits our modern age. Instead we still follow these ridiculous antiquated plans that will have no place in our future.  But that is about to change……

I am talking about the Sykes Picot Agreement of 1916 that provided for control by the then imperial powers of the United Kingdom and France and a bit later, the United States of America. In addition, I am speaking of the now silly and antiquated idea that is Judenstat; the grand vision of Austro-Hungarian journalist, playwright, political activist and writer Theodor Herzl and implemented by the Russian Chaim Weitzman.

Sykes Picot was concocted 99 years ago by men who did NOT live in our world. There was no television, no smart phones, no internet, and virtually no connections. The world was just beginning on its 100 year addiction on dirty oil. The vision of colonial imperial conquest was a short sided play for control of this oil resource that would define the world and underline the 20th century. But this oil resource is maturing as a global staple and it will play a smaller part in our next 100 years as technology changes everything.

As this resource becomes less evasive and more rounded in our world economies, the importance of maintaining absolute control of such becomes less attractive to the global predators. And so the pressure to dominate the Middle East will slow down.

But what is really going to absolutely destroy the Sykes Picot vision is our new world connections. With human connections, we are finding new ways to communicate and new ways to resolve our problems and our differences.

Granted, as the Coalition of the Killing engages in attacks on its very own Frankenstein (ISIS), it can be hard to see past this current war that honors the past by its adherence to a vision that is dying on vine. So you’d be excused if what is being said here causes you to you pause. But indulge deeply for a few moments. Take a look around and see the world not where it is but where its’ going. And then we can see that the sooner we engage in policies of the future rather than policies of the past, the faster the human condition will improve and mankind all over the world will benefit.

Israel, the result of a jaundiced vision by a man who lived in a world that used the buggy whip as its primary driver of horse power, is the most amazing hanger on to the past.  But even that last gasp is about to die off.

It is beyond antiquated in its vision of a Jewish only state as it slams directly into our modern connected world where racism and bigotry are getting flattened by human connections that are increasingly unable to see color and faith as barriers to separate us.

And as these next 100 years unfold, the Jewish only state will be the proverbial buggy whip looked upon by our coming generations as a silly weird ambition by the last generation to run their world without connection.

I mean Theordor Herzl, the founding father of Zionism, could NOT have foreseen the technology advances that have just connected our world rending his vision a silly idea that clashes with our modern world.

He lived in a time that was dominated by separate cultures and nations that had very clear and high differences of religion, colors, and traditions. There was no television for him; no internet, no smart phones to check the weather in Mumbai or to interact with his friends on Facebook. His idea of good communication was a long winded written letter that took months do deliver or a telegraph machine.  So what could one expect from such a 19th century man?

But today the flat world has landed on his grand vision to provide European Jews with a place they can call their home and its being replaced with a multi-polar world where borders are being erased, cultures are merging, languages are dying at an unprecedented pace, and organized religions are being challenged by a new universal enlightenment that is shedding light into spaces that have been shadowed in the 20th century dark. And it’s changing everything!

And so Israel, with its dream of Jews only does NOT need to be attacked, invaded, or abolished. Its idea is dying by the massive wave that is evolution and humanity.

Admittedly the holders on to this waste of energy dream are still fighting to implement Eretz Israel and so we have this transition phase still going on. But really, in the next 100 years, Israel will cease to exist as a one religion only state because the human technology, connections and movements will render it so.  Instead nature will morph like all the rest of the 20th century states that try to hold on to the past.  It will morph into a great part of the new world order making all nations part of a greater enlightened world.

So if you are 20th century investor in Israel, Saudi Arabia, UAE, Jordan, Lebanon, Syria, Iraq, or Iran, I suggest you divest because you are about to lose all your money as the 21st century wave demolishes Sykes Picot and Judenstat into the history books. Instead, invest in alternative energies and human economies that will drive these next 100 years and not only profit but become a 21st century prophet!

Educated at University of Nevada Las Vegas and California State University Fullerton, his articles appear in Veterans Today, Money News Now and his Johnny Punish Blog. His art music is promoted by Peapolz Media Records and played on net radio at Last.fm, IHeartRadio.com and more.