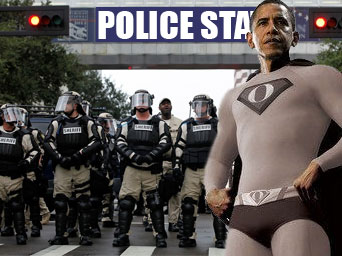 Is the Obama regime preparing for mass arrests of Americans? Some indicators suggest this is a real possibility.

It has all the laws it needs to imprison anyone should it plan to make mass arrests (thanks, Congress, for the unconstitutional Patriot Act and National Defense Authorization Act).

It has illegally compiled lists of some 8 million names, (thank you, FBI and NSA).

It has vast stockpiles of weapons and bullets, (salute the Pentagon!)

It has $385 million worth of new dormitories (i.e., prisons?) tucked away on military bases called “National Emergency Centers” (thanks, Halliburton construction subsidiary Kellogg, Brown and Root).

And it has invested 120,000 on-duty officers from 73 law enforcement agencies with authority to arrest “suspects.”

If you think “it can’t happen here,” as described in the 1935 Sinclair Lewis novel of that name, think again. What’s to stop USG from doing Stateside what it has been doing around the world? After all, who has already begun killing American citizens with illegal drone strikes if not our totalitarian trendsetter President Barack Obama?

As Bill Blum, a Washington investigative journalist writes in his “Anti-Empire Report,” since the end of World War 2, the U.S. has interfered in the elections of at least 30 countries and dropped bombs on people in as many others and attempted to overthrow more than 50, mostly democratic, governments, such as Iran in 1953 and Chile in 1973. What’s stopping it from turning a democracy into a dictatorship?

President Obama has gone so far down the totalitarian road, American Civil Liberties Union(ACLU) Executive Director Anthony Romero proclaimed, “I am disgusted with this president…it’s (his) policies on civil liberties and national security issues I’m disgusted by.”

Romero added, Obama’s actions “raises serious questions about the administration’s commitment to the rule of law.” That’s a polite way of saying the president is a law-breaker. (In Chicago, the term to describe such people is ‘gangster.’) And extrajudicial killings are official Obama policy. As Director of National Intelligence Dennis Blair claimed in Congressional testimony, the U.S. can, with executive approval, kill U.S. citizens suspected of terrorism.

“It is alarming to hear that the Obama administration is asserting that the president can authorize the assassination of Americans abroad, even if they are far from any battlefield and may have never taken up arms against the U.S., but have only been deemed to constitute and unspecified ‘threat,'” points out Ben Wizner, staff lawyer for the ACLU National Security Project.

The key phrase here is “unspecified ‘threat'”, another way of saying “suspected.” As George Mickum, a lawyer who has represented Guantanamo Bay prisoners, told Inter Press Service(IPS), “We have killed thousands of innocent civilians while attempting to target alleged operatives. And let us not forget how frequently our intelligence has been wrong about alleged operatives. As the civilians were not engaged in hostile actions, their murders by the Obama regime become ‘war crimes.'” (Dear George, “we” have not done anything!)

And constitutional scholar Francis Boyle of the University of Illinois, Champaign, told IPS, “This extrajudicial execution of human beings constitutes murder, war crimes, and because the drone strikes are widespread and systemic, crimes against humanity. Because Obama’s drone strikes almost exclusively target Muslims and People of Color, they verge upon genocide.”

Boyle said, further, “The U.S. government has now established a ‘death list’ for U.S. citizens abroad akin to those established by Latin American dictatorships during their so-called dirty wars.”

If you think the USG will not condemn more Americans to death without trials, ponder the words of attorney John Whitehead, head of the Rutherford Institute of Charlottesville, Va.: “Unfortunately, ‘we the people’ have become so trusting, so gullible, so easily distracted, so out-of-touch, so compliant and so indoctrinated on the idea that our government will always do the right thing by us that we have ignored the warning signs all around us, or at least failed to recognize them as potential red flags.” Whitehead is the author of “A Government of Wolves: The Emerging American Police State.”

To our knowledge,the Obama regime has not answered questions Whitehead put to it, which (my paraphrasing) include:

Q: Why do the Postal Service, Department of Education, Internal Revenue Service, Social Security Administration and National Oceanic and Atmospheric Administration buy up weapons and ammunition in bulk?

Q: Why does the Department of Agriculture need 320,000 rounds of hollow point bullets and .40 caliber submachine guns?

Q: Why is FEMA stockpiling massive quantities of emergency supplies?

Q: Why is DHS giving away millions of dollars’ worth of federal security grants to states that federal intelligence agencies ruled have “no specific foreign or domestic terrorism threat?”

Whitehead points to a New York Times article quoting a Pentagon source who says that under Obama police departments have received tens of thousands of machine guns; nearly 200,000 ammunition magazines; thousands of pieces of camouflage and night-vision equipment; and hundreds of silencers, armored cars and aircraft.

In addition to militarizing the police, Obama’s USG is building a Main Core database, Whitehead says, that “would be used by military officials to locate and round up Americans seen as threats to national security…to be carried out by the Army and FEMA.

Whitehead concludes, “Taken individually, these questions are alarming enough. However, when viewed collectively, they leave one wondering what exactly the U.S. government is preparing for and whether American citizens shouldn’t be preparing, as well, for that eventuality when our so-called ‘government of the people, by the people, for the people’ is no longer answerable to ‘we the people.'” #

About the Author: Sherwood Ross, who formerly reported for the Chicago Daily News and worked as a columnist for wire services, currently operates a public relations firm “for good causes”. Reach him at [email protected]