Good old Professor Hall, the University of Lethbridge tenured prof is still a madman and poster boy for the end of academic tenure. He spoke at Tehran’s New Horizon conference on the topic ofThe Israeli Lobby in Canada. Other fab topics on the conference agenda included “Mossad’s Role in the 9/11 Coup d’Etat”. That sounds like a real barn burner.

The New Horizon conference is an annual festival of Khomeinist Kooks inaugurated by Ahmadinejad. Last year’s conference was cancelled in an apparent goodwill gesture in advance of the Iran Nuclear talks. I imagine Obama’s posturing gave them license to revive it this year.

The conference is billed as a forum for “independent thinkers” according to the site, where the continuum of independent thought runs the gamut from Jew Hate to even more Jew Hate.

The only other Canadian appearing on the published list of conference participants was Eric Walberg, an alleged journalist who could make Goebbels blush. 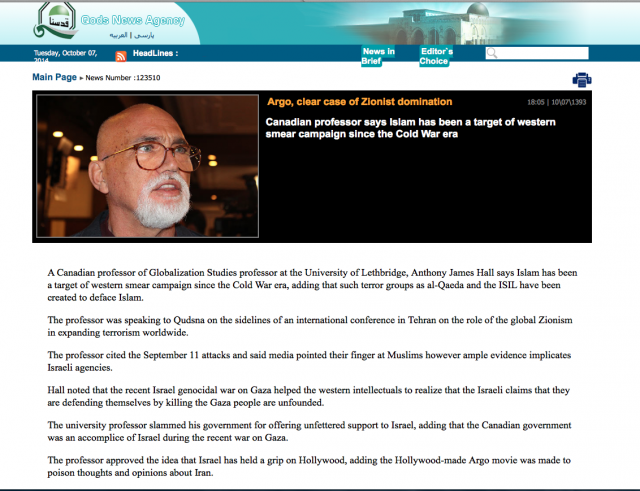