Home World Which way will the UK Parliament jump when it votes on Palestinian... 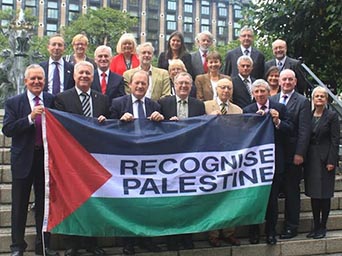 (12 October 2014) – On Monday the House of Commons in London will debate and vote on a parliamentary motion to unilaterally recognise the State of Palestine.

A positive result could have a tremendous influence on the state of play in the Palestinians’ struggle for freedom. Therefore the dark forces of Zionism are marshalling their venomous Friends of Israel and desperately piling on the the pressure to persuade the more feeble-minded MPs to vote against.

For example, The Independent reports http://www.independent.co.uk/news/world/politics/israelgaza-conflict-mps-set-to-vote-to-recognise-state-of-palestine-9785875.html that Conservative MP Guto Bebb has laid down a wrecking amendment stating that recognition should only come “on the conclusion of successful peace negotiations between the Israeli government and the Palestinian Authority… How can you recognise a state when the borders of that state have not been agreed?”

Bebb convenient forgets that Israel has aggressively expanded far beyond its recognised borders in defiance of UN resolutions and international law. Nobody agreed the borders Israel presently claims.

And an instruction to MPs from the Labour Party’s leadership to vote for recognition of Palestine has sent their pro-Israel contingent into a panic-stricken tailspin. The Zio-stooges insist on Palestinian statehood being “part of a process of direct negotiations between the Palestinian Authority and the Israeli government”, while Shadow Foreign Secretary Douglas Alexander has been saying it is “not a gift to be given but a right to be recognised.”

My own MP, Conservative Henry Bellingham, writes that he supports Palestinian statehood and thinks “early recognition” would be helpful. He sounds positive but doesn’t say explicitly that he’ll vote for recognition on Monday. Remember, the Conservative leadership, headed by Agent Cameron, couldn’t bring itself to condemn even the foulest of Israel’s atrocities during its onslaught on Gaza this summer.

And my MP couldn’t resist including a heavy dose of unmitigated Zio-tosh, no doubt scripted by the Foreign Office’s friends in Tel Aviv, about the British Government wanting to see “a two-state solution brought about through negotiated agreement” leading to “a safe and secure Israel living along side a viable and sovereign Palestinian State based on 1967 borders… with land swaps [Palestine to be only viable, mark you, not secure like Israel]”.

As if a negotiated settlement was ever possible… In 66 years it has never been achieved so why keep harping on about it when a just solution based on international law and UN resolutions is the only thing that matters?

Bellingham also says that Israel should merely have to “ease its restriction to improve the situation” for ordinary Palestinians, when those restrictions amount to collective punishment (i.e. a war crime) and ought to be ended altogether. Furthermore, he and the Government want to ensure that Hamas and other “militant” groups stop attacking Israel without taking account of the Tel Aviv regime’s mass slaughter of civilians, non-stop violation of Gaza’s airspace and coastal waters and incursions on the ground, and all-round contempt for international law.

He fails to acknowledge that the cause of the violence is invariably Israel’s wanton agression and instead blames Hamas for responding with armed resistance. And he talks about bringing Gaza back under Palestinian Authority control with no assurance that the PA will be overhauled to reflect the people’s democratic wishes and Hamas’s proper part in it, or that Abbas whose legitimate term as President expired long ago will be removed.

Perhaps the most tiresome aspect of the letter is his remark that the ceasefire in August provides an opportunity to “make progress in tackling the underlying causes”. We are never told what the Government thinks the causes of the conflict are. They are many, of course, and they go back at least a century and peaked over 60 years ago. More recently a major additional cause has been the failure by the United States, Britian and the rest of the Quartet to implement the 2005 Agreement on Movement, drawn up by the US, sponsored by the Quartet and launched with great razzamatazz by Condoleezza Rice (then US Secretary of State) and Javier Solana (EU High Representative) in Jerusalem in November 2005. http://unispal.un.org/UNISPAL.NSF/0/C73B42AA9C864783852570BA0064EF7E

Rice said the Israeli withdrawal from Gaza returned control of that territory to the Palestinian people and would give them freedom to move, to trade and to live ordinary lives again. It promised, for example, to give Palestinians back control over entry and exit from their territory including people and cargo between Israel, Gaza and the West Bank and to remove obstacles to movement. It promised that construction of a Palestinian seaport could begin, likewise the reconstruction of the airport.

Israel, as well as the sponsors of the Agreement, failed to honour any of these promises.
The ceasefire in 2012, after Operation Pillar of Cloud, included an agreement in which Israel undertook to cease military incursions into Gaza by land, sea and air, cease the targeting of individuals, and to “open the crossings and facilitate the movement of people and transfer of goods, and refrain from restricting residents’ free movement and targeting residents in border areas”.

Again Israel fulfilled none of these obligations.

The thick-heads at Westminster seem unable to grasp that there can be no peace under occupation and no peace without justice. The conduct of Israel and the United States makes it increasingly obvious that they do not want peace. Nor, it seems, do elements within the British Government. Their aim is to keep the Middle East pot boiling. 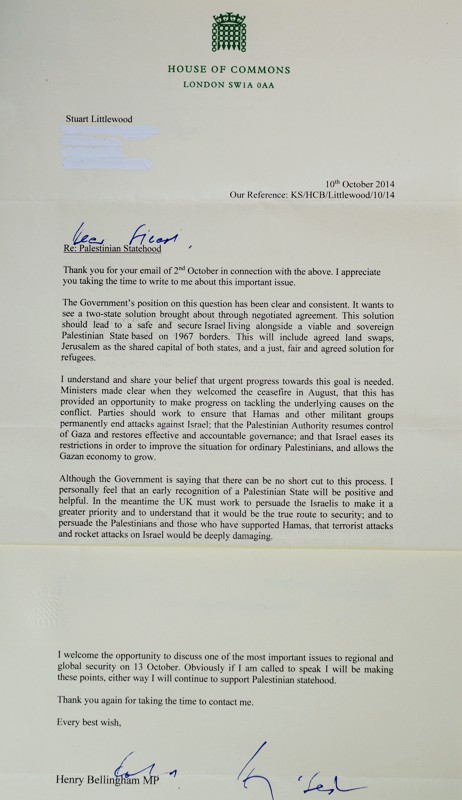