Home Life The End of Jewishness? 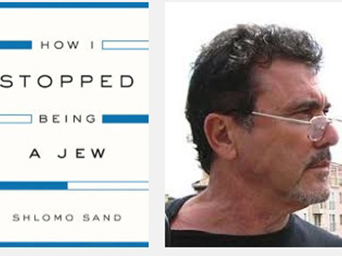 What does it mean to be a Jew?

Unproblematically, it can mean professing the Jewish religion and participating in its rites, symbols, and discourses. In this sense, being a Jew simply means adhering to Judaism, just as being a Muslim or Christian or Buddhist means adhering to Islam, Christianity, or Buddhism.

Yet there are many self-styled Jews who do not profess the religion of Judaism – or any religion. What can this possibly mean?

Two great Israeli-born thinkers – Gilad Atzmon and Schlomo Sand – have summoned up the courage to think seriously and systematically about Jewish identity and its associated identity politics. And they have arrived at essentially the same conclusion: “Jewishness” without Judaism is both vacuous and pernicious.

Interestingly, neither Atzmon nor Sand has solved the problem in the obvious way: by returning to the religion of Judaism. Instead, both have chosen to embrace secular humanist, universalist values and identities. Atzmon has left Israel while retaining a certain ambivalent connection to Jewish identity; whereas Sand has resigned from Jewish identity while retaining an ambivalent identification with Israel.

Like Atzmon’s The Wandering Who?, Sand’s How I Stopped Being a Jew evinces horror at what Jewishness means in Israel today: “…first and foremost, being a privileged citizen who enjoys prerogatives refused to those who are not Jews, and particularly to those who are Arabs…In the State of Israel in the early twenty-first century, does it not appear that being a Jew corresponds to being a white in the United States in the 1950s or a French person in Algeria before 1962? Does not the status of Jews in Israel resemble that of Afrikaners in South Africa before 1994? And is it possible that it might soon resemble the status of the Aryan in Germany in the 1930s?”

While renouncing Jewishness, Sand still considers himself an Israeli – a seeming contradiction, since Israel defines itself as the Jewish State. What he means is that he speaks the main Israeli national language (which, he points out, should not be called Hebrew) and participates in a distinctive Israeli culture…but wishes to see that language and culture become non-exclusivist, non-racist, and de-coupled from any particular religion. Though he doesn’t say so, this would require ending the Jewish State and making Israel (or Israel-Palestine) a state for all its rightful citizens – including any of the ethnically-cleansed Palestinians who wish to return and be compensated for their losses and suffering.

How I Stopped Being a Jew carries the argument of Sand’s earlier book The Invention of the Jewish People to its logical conclusion. If the whole notion of “the Jewish people” is mythical, vacuous, and (at least today) pernicious, non-religious people from Jewish backgrounds ought to relinquish their Jewish identities.

Like Atzmon, Sand is thinking through one manifestation of a larger problem: How relatively benign traditional religious identities are, in the modern world, mutating into vicious, potentially genocidal tribal and nationalistic shibboleths. German Christians may not have always been Christ-like, but when they changed from Christians into Germans and then Aryan Nazis, their collective behavior took a turn for the worse. Likewise, young, relatively non-religious people from Muslim backgrounds behave badly when they become “Islamic State” nationalists, just as Jews turned genocidal when they lost their religion and began worshiping the false god of Zionism. (One might even say that the tragedy of “Jewish State” is being farcically re-enacted in the antics of its “Islamic State” imitators.)

Sand vaunts, and inhabits, a secular postmodern world in which each individual carries many overlapping identities, all of which pertain to the life of this world while ignoring traditional teachings about the next world, the source and meaning of life, and so on. Personally I find this unsatisfying, since I have had constant and occasionally powerful religious experiences throughout my life, and have been forced to turn to traditional teachings to make sense of them. It seems to me that people are doomed to be always grasping for absolutes, and if there is no living religious tradition to structure and enhance that quest, it will turn sour and wither into idolatries of one kind or another. Nationalism, even the relatively benign liberal-humanist version Sand likes, cannot help but become the object of false worship and the incubator of hatreds against those outside the sacred national boundaries. The experience of the liberal-humanist USA – whose guiding Enlightenment philosophy seems on the surface so different from Israel’s racist ethnocracy – is a case in point.

Though I have followed a very different path from Sand – I resigned from secular humanism and embraced Islam, while he has resigned from Judaism in favor of secular humanism – I can identify with his courage in deconstructing an empty, unsatisfying, oppressive identity and daring to step outside of it. Sand is an erudite, rigorous thinker and a generous spirit, and I wish him well…and hope his fellow Israelis (and self-styled secular Jews all over the world) pay heed to this beautiful and important book.