Hot fusion was the cold war quest. Besides the space race, fusion was the socio scientific dream. The loss of hope … the loss of myth … in this massive social project produced a brooding meditation among engineers who were devoted to its fulfillment. For Be better part of twenty years there were billions of dollars spent for fusion research … seemingly in vain….

Farnsworth continued to be a prolific designer of very unusual electron tubes before and after World War II. Casual examination of his patents continually proved the genius behind the legend. Dr. Farnsworth explored new alternatives and designed radically new concepts into a series of electron tubes which became as heralded as his development of electronic television. Each development produced in own species of anomalous phenomena These were each utilized and compounded in his successive developments. The patent record tells the story best.
PLASMOIDS AND VIRTUAL ELECTRODES
While testing high power UHF tubes Farnsworth discovered an anomalous self focussiog space charge phenomenon. These space charge plasmoids glowed all the more brilliant with increasing application of voltage … a control characteristic. He named these point plasma phenomena “poissors”.
“Poissors are brilliant space suspended plasmoids of star like appearance. When Dr. Farnsworth operated his multipactors the poissor phenomena manifested themselves with special brilliance. Electron optical focusing concentrates ions just as mirrors concentrate light. Early Farnsworth multipactors utilized twin opposed concave cold cathodes.
The design feature of concave electrodes was a radical departure in the world of electron tube designs at the time. Most electrodes of the day were simple planar surfaces. The concaves permitted the re discovery of electron optics … a phenomenon originally witnessed by Sir William Crookes and forgotten. Students are directed to the Crookes tube with its concave cathodes.
Farnsworth multipactors and cold cathode discharge tubes produce optically focused “poissors” and exhibited all the response control characteristics later sought by plasma physicists in their race toward achieving hot fusion. Control responsive poissors would shrink in size, increase in ionic density, and produce more brilliant light with increasing voltage application.
Notably discovered in 1936, the poissor phenomenon made a new breed of electron power tubes and plasma devices possible. The existence of these mysterious suspended plasmoids stimulated Farnsworth’s research toward the refined use of electron optics. His refinement and use of the newly manifested phenomena produced remarkable performance efficiencies in UHF and SHF applications. In their unprecedented spherical geometries the Farnsworth tubes proved incredibly efficient and long lasting.
Virtual electrodes could influence electron behavior in power tubes. Ions could be bound in small plasma points (poissors) exhibiting stability in ionic multi layers and sheaths. Poissors could absorb and store energy: an aspect which deeply impressed Dr. Farnsworth. The time for their retrieval from the archives of the anomalous drew close.
By 1953 he had conceived of a means for using the poissor phenomenon to produce controlled nuclear fusion reactions.. The patent record shows that Farnsworth achieved the goal. Yet, there are far more deeply entwined reasons why few have ever heard of Dr. Farnsworth’s contributions and achievements besides the academic censure of this possibility.
THE “FUSOR”
In 1959 H. S. Geneen (Raytheon) invited Dr. Farnsworth to address the ITT board of directors on controlled nuclear fusion. Against the verbalized misgivings of the AEC this lecture presentation was given. Shortly thereafter a preliminary test on the Farnsworth “Fusor” was performed in a small ITT basement laboratory. His first design for a hot fusion reactor was realized in 1959. ITT monitored all the research and brought its own supervisors into Farnsworth’s team.
Virtual poissor plasmoids of deuterium would be isolated, shaped, confined, treated, balanced, or moved without magnetic confinement. Farnsworth’s solution to reactant confinement was elegant, simple, inexpensive, and highly efficient. He designed a new and dramatically original tube which he named “The Fusor”. This was the summation of a lifetime’s discoveries and development. I believe it is the most advanced electron power tube ever designed.
The Fusor is a device which produces controllable hot fusion reactions and does not utilize magnetic confinement. The design is a radical departure from all the designs of its time frame. The Fusor is comprised of a spherical anode which concentrically surrounds a cathode. A plurality of ion guns are mounted on the anode exterior in spherically spaced and diametrically aligned relationship so that their beam axes intersect at the cathode center. Ions from the guns are propelled and focused into the center of the cathode. This establishes in the cathode interior a series of concentric spherical sheaths of alternating maxima and minima potentials: the “virtual electrodes”.
Ions never touch any surfaces in these tubes. Magnets are never needed. The ions which “fall” into the center-most virtual electrode have fusion energies, and are contained at a density sufficient to produce fusion reactions. Charged particles are literally compressed into the required density in the central region by the process of inertial containment … a term in the art which Farnsworth first coined.
Oscillating ions are concentrically gathered in a series of charge sheaths which conform to the optically focussed fields and which represent the distributed kinetic energies of ions in the poissor. Potential escaping pre reactive ions encounter successive electrostatic repulsions until they are forced back into their center. The Fusor System proved stable throughout its forgotten seven year research history.
With developed potentials of sufficiently high magnitude the fusion reaction can be sustained and controlled at will. Furthermore, fusion energy produces powerfully escaping nuclei which perform work against the anode field. This ionic pressure augments the applied field and appearing as a dramatic surge in field strength: one that may be directly harnessed and used in external loads as electrical power.
The fears of a “runaway reaction” were handled in the natural equilibrium maintained by the poissor core structure … as stars self maintain their output by expanding and reducing plasma density. Poissors were found to be remarkably resilient and resistive to instabilities. Farnsworth solved the confinement and conversion problems in one design. The field symmetries and process involved in achieving this variety of hot fusion seems macro-analogous to those characteristics being now explored in “cold” fusion.
On October 8, 1960, the Mark I produced a steady state neutron count when deuterium was admitted into the device with very low power application. The 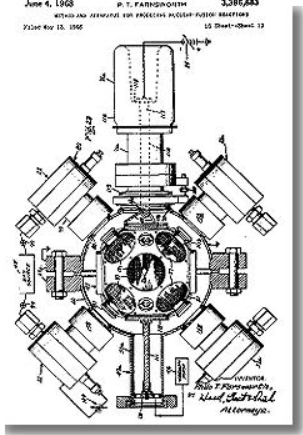 central feature during these tests was not the neutron count itself. What was sought in these tests lay in the control of the reaction under increasing power application. Farnsworth established and charted increasing neutron counts with increasing application of electrostatic power. It is suggested that the reader obtain and study copies of the Fusor (patent 3,386,883).
STEADY PROGRESS
With deuterium gas in the Mark II Model 2 Fusor a count exceeding 50 M neutrons cc/sec was recorded at 80 Kv. and 30 rnA. input. This device produced 1.3 G-neutrons/sec. in a sustained reaction for more than one minute. These reactions were stable, completely under the operator’s control, and could be repeated.
On October 5, 1965 the Fusor Mark II Model 6 was tested. A reconfigured, high precision ion gun arrangement produced l G neutrons cc/see at 20 Kv. and 1 mA …. a record achievement. On December 28, 1965 tritium was admitted into the test chamber … producing 2.6 G-neutrons/sec. at 105 Kv. and 45 mA.. With a mixture of tritium and deuterium on the very next day Dr. Farnsworth’s team measured and recorded 6.2 G-neutrons/sec. at 170 Kv..
The Mark III Fusor produced startling high records in quick succession. By the start of 196.5 the team was routinely measuring 15.5 G-neutrons/sec. at 150 Kv and 70 mA.. The final problem to be tackled involved the poissor itself. Self-containing and tightly layered, the fusion poissor would not admit fuel into its core once the reaction had begun. It must be remembered that this Fusor was softball sized. A Fusor having a diameter of just one meter would permit greater ignition power for a smaller time period … while multiplying output power volumetricallv.
SUSTAINED FUSION REACTION
Dr. Farnsworth reported that his team achieved a self sustaining reaction on several occasions … and could repeat the effect. He once invited his wife to watch a test run of this feat. As power was applied to the Fusor the neutron reading meter achieved a steady threshold and there remained … until a slight increment of power was applied. Then the needle went off the scale. Dr. Farnsworth cut the applied power … but the needle remained in place for thirty seconds or more as the reaction continued. 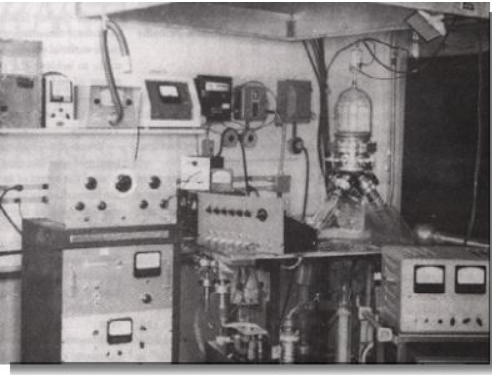