Here’s how you can help overthrow these two criminal regimes – and the American traitors who collaborate with them.

28 pages that could change the Middle East

Those classified pages of the 2002 Joint Congressional 9/11 Report implicate America’s so-called Middle Eastern “allies” in 9/11. The bill HR428 would declassify the 28 pages. Pulling on this thread could unravel the whole 9/11 cover-up. So please take these specific steps, right now or before the end of this weekend:

1) Go directly to this page to read HR428: https://www.911truthoutreach.org/declassify28-quick-navigation/resolution-428.html  (a very brief but to-the-point document).

2) Go to this page: https://www.911truthoutreach.org/declassify-28pages/commentary.html to understand the immense value of passage of HR428 toward achievement of the goals of the 9/11 Truth Movement.

3) Go to this page: https://www.911truthoutreach.org/declassify28-quick-navigation/sample-letters.html to get a feel for how to maximize effectiveness of your personal letter to your congressional representative.

(Thanks to Christopher Gruener of the Greater Boston Alliance for 9/11 Truth & Justice for these four steps.)

Below is yesterday’s debate on the Sheikh al-Nimr case.

Watch “The Debate at Press TV 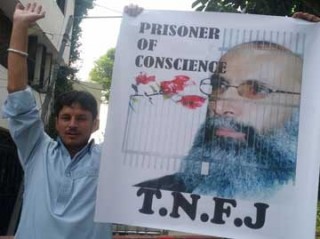 Kevin Barrett, editor at Veteran’s Today from Madison, told Press TV in an interview Friday, “The human rights situation in KSA is completely atrocious and this death sentence against Sheikh al-Nimr is just outrageous.”

“We’re not talking about capital punishment in general. We’re talking about an atrocious regime that tortures people based on their perfectly reasonable statements and beliefs.”

Sheikh Nimr was sentenced to death at the Specialized Criminal Court in the Saudi capital, Riyadh, on Wednesday.

Amnesty International has called the death sentence for Sheikh Nimr “appalling,” saying the verdict should be quashed since it is politically motivated.

Barrett also stated that Sheikh Nimr has “never been accused credibly of any serious wrong-doing at all.”

“Instead he has simply spoken out against the outrageous tyranny of the ruling family of Saudi Arabia and as a result they are threatening to behead him and display his body.”

The senior Saudi Shia cleric, who was attacked and arrested in July 2012, is accused of delivering anti-regime speeches and defending political prisoners.