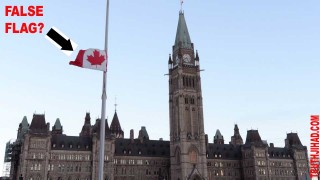 Was the recent shooting in Ottawa yet another false flag?

We don’t have any absolute confirmation yet. But there were plenty of indications.

First, just hours before the shooting, BBC News reported that Canada had raised its terror threat. As everyone knows, they don’t raise the terror threat level every day. Here in the USA it has been stuck on “orange” for years. If it ever starts blinking red, you can assume that a new 9/11 false flag op is on the way.

Then right after the shooting, the Mounties (RCMP) urged the public NOT to post any photos or videos of the shooting. The authorities obviously want to quickly seize control of the narrative and avoid embarrassments like the Boston Bombing photos showing that Craft International operatives, not the Tsarnaev brothers, carried out the attack.

For more on the suspicious circumstances surrounding the attack in Ottawa, read blacklisted professor Denis Rancourt’s article here at VT.

It’s getting harder and harder for the Empire’s scriptwriters and spinmeisters to control public awareness. As I write this, “Ottawa false flag” gets over 150,000 Google hits, while “Ottawa shooting false flag” gets 77,000.

To keep us confused, they’re doing “cognitive infiltration” – a  term coined by Obama’s Information Czar Cass Sunstein, who urged the government to “cognitively infiltrate conspiracy groups” and spread “beneficial cognitive diversity” – and “disable the purveyors of conspiracy theories” like those surrounding 9/11.

In an attempt to “innoculate” the public against the “conspiracy virus,” Sunstein’s minions are preempting alternative takes on the Ottawa shooting with articles presenting and “debunking” the “conspiracy theories.” They have been forced to publish articles such as “Ottawa War Memorial Shooting: The Top 5 Conspiracy Theories” because today, whenever something like this happens, everybody’s first thought is “yet another false flag?”

On today’s False Flag Weekly News, VT Editor Jim Fetzer and I discussed the Ottawa shooting and the other false flag/conspiracy stories the mainstream won’t touch.