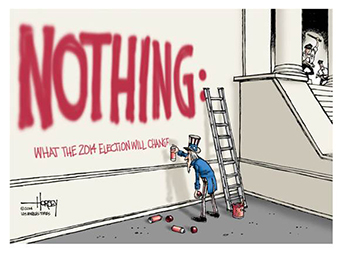 The 2014 midterm election will change nothing in the United States ~ 2014 is set to be the most expensive non-presidential election in US history and unfortunately money buys elections. Not only do politicians do the bidding of the wealthy, they themselves are increasingly numbered among the rich and super-rich and they follow their corporate masters. Social inequality rules in America and the 2014 midterm election has been reduced to Kabuki theater as millionaire Republicans and Democrats rearrange the chairs on the deck of the sinking Republic while the main stream press tries to convince us that it all really matters:

“The liberty of a democracy is not safe if the people tolerate the growth of private power to the point where it becomes stronger than the democratic state itself. That in its essence is fascism – ownership of government by an individual, by a group or any controlling private power. “: President Franklin Delano Roosevelt

The 2014 midterm election is a particularly menacing level of Donkey Kong for Democrats. But 2016 isn’t. Why? Ezra Klein offers a simple explanation of this political game in this excellent three minute video

To fully understand this reoccurring political theater we must fully understand the American Oligarchy. WSWS cuts to the chase in their recent article ~ THE AMERICAN OLIGARCHY ; “ What accounts for this hollowing-out of American politics and the transformation of elections into empty biennial rituals? As with all significant political transformations, these changes are rooted in deeper social processes. One does not have to look all too far to identify them. Over the past several weeks, report after report has been released documenting the extraordinary growth of social inequality in the United States and throughout the world. Late last month, Forbes magazine reported that the 400 richest people in the United States saw their wealth grow 14 percent over the past year. The following week, the Organization for Economic Cooperation and Development reported that global social inequality has eclipsed the pre-Great Depression highs of the 1920s.”

How can these vast changes in economic relationships not have had a profound and transformative impact on political life?

Andre Damon, WSWS explains ~ “The historian Edward Gibbon once summed up the political form of the Roman Empire as “an absolute monarchy disguised by the forms of a commonwealth.” Taking our cue from his definition, we can say that the United States has become an oligarchy disguised by the outward, increasingly threadbare trappings of a democracy…..Whatever the pretense of “one person, one vote,” the fact is that the top 0.1 percent dictates policy and essentially selects the personnel tasked with carrying it out.” See WSWS article

The Supreme Court’s 2010 decision in Citizens United v. Federal Election Commission helped unleash unprecedented amounts of outside spending in the 2010 and 2012 election cycles. The case, along with other legal developments, spawned the creation of super PACs, which can accept unlimited contributions from corporate and union treasuries, as well as from individuals; these groups spent more than $600 million in the 2012 election cycle. It also triggered a boom in political activity by tax-exempt “dark money” organizations that don’t have to disclose their donors. 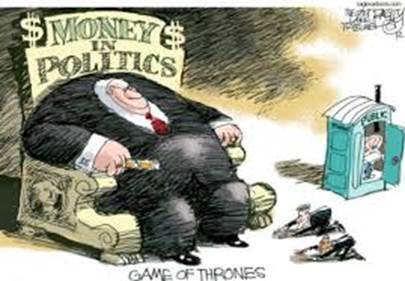 Citizens United, in essence, established corporate personhood where corporations have the same weight as individual voters but with obvious incredible financial clout and leverage.

It always seems to come back to George Carlin telling the truth about Banksters, Corporations and who really controls America ~ 3 minute video

As such, the most important under reported and ignored political event in the United States at the present time is the Move To Amend movement .

Move to Amend is a coalition of hundreds of organizations and tens of thousands of individuals committed to social and economic justice, ending corporate rule, and building a vibrant democracy that is genuinely accountable to the people, not corporate interests. It calls for an amendment to the US Constitution to unequivocally state that inalienable rights belong to human beings only, and that money is not a form of protected free speech under the First Amendment and can be regulated in political campaigns.

Find out more and how you can participate so that our future elections will no longer mean nothing. Sign up now ~ 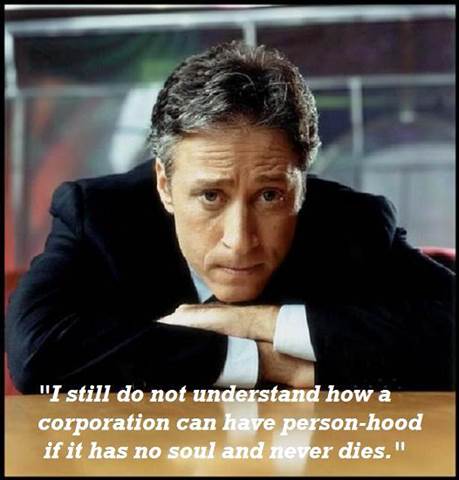