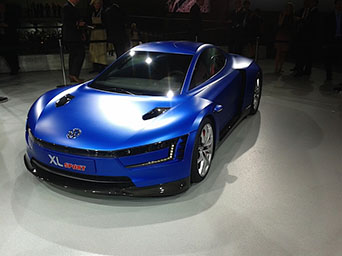 On October 3, 2014 shortly before 7 p.m., I went to the press office at the Porte de Versailles Convention Center to get my press badge for 2014 Paris Mondial de l’Automobile which was held from October 4-19 . I thought it would be good to get it a day in advance. I overheard a man asking about directions to a private cocktail reception and was curious. Then I walked around the center to see where it was.

A security person told me that Volkswagen was having a reception that night. With my press badge for Mondial de l’Automobile in hand, I went to the hall where Volkswagen was having their reception. A hostess asked me for my invitation. I told her that I did not have one but would like to attend. She asked someone and I was given a card to enter.

I thought there would be a small crowd but I was surprised to see about 1,400 people. Most were seated in an area which had simultaneous interpretation from German into French and English. Having arrived late I stood as did many others and saw the opening presentation on closed circuit screen as Prof. Dr. Winterkorn the CEO and Chairman of the Board talked about Volkswagen’s developments.He said that since the beginning of Volkswagen 200 million cars have been sold. Then some Volkswagen cars were driven right into the hall as the crowd applauded.

Mr. Albrecht Reimold Chairman of the Board, based in Bratislava Slovakia stood next to me and intepreted some of the speech for me. He was very cordial to me. He told me that the group in Slovakia produces 5 brands: VW, Audi, Skoda, Seat and Porche and has 9,400 employees. In 2013 they produced 426,000 cars.

We were surprised when the famous actress, Cathrine De Neuve appeared on stage and accepted a check for 200,000 Euros for Films for Peace. It was not a real check but a mock up version. We all knew it was very generous of Volkswagen.

Visitors went to see the great new cars and take photographs. I had the pleasure of meeting Mr. Eric Liu, director and head of experience marketing, sales & marketing from Beijing China. I congratulated him on China’s national day. He was impressed and told me that he has family in USA.

Waitresses and waiters came around on the floor with many delicacies which were either specialties of Germany or France. The crowd enjoyed good food and even French pastries. While seeing the cars, I met Alexander Batke-Lachmann from Berlin who took my photo. He works for Off One’s Rocker which is a newspaper about cars.

One lady said that I must be an individualist. I asked her why and she said I was not dressed in black like most of the other ladies but in a green dress. I told her to look at herself; she was dressed in rose.

After a great evening of delicious food, meeting interesting people and looking at fantastic new cars, I was ready to leave. I told the lady at the coat check at about midnight that I would see if I could get the bus which goes near my place or take the metro. She suggested I take their shuttle. I saw mini vans outside and asked if they went only to hotels. They offered to take me home so I got into a mini van. The driver told me he drove from Germany and used a GPS to find locations. He said my place was only 11 kilometers away – about 20 mins. I told him it is about 45 minutes with the bus. As he was driving through Paris, I pointed out some famous places like the Eiffel Tower, Seine River and the Opera. Almost an hour later, he dropped me off in front of my door! I felt like an honored person.

For more information about Volkswagen please go to www.volkswagen.com