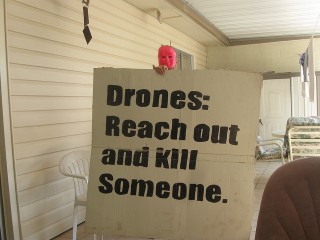 Part 5 of Counter-intelligence: Shining a Light on Black Operations

The final episode of Counter-intelligence is dedicated to drone technology and Barack Obama’s virtual repeal of the Fifth Amendment. The Fifth Amendment of the Bill of Rights guarantees that “no person shall be deprived of life, liberty or property without due process of law.” Obama’s National Defense Authorization Act (NDAA) allows the government to detain individuals indefinitely without charge, trial or conviction. Obama has also granted himself the authority, via executive order, to arbitrarily execute civilians (including American citizens) without due process, evidence or accountability to Congress or the courts. Both overturn hundreds of years of common law preventing the rich and powerful from using government to attack their personal enemies.

Filmmaker Scott Noble reminds us that Obama deliberately leaked details of his weekly White House “kill list” meetings. Individuals are added to the kill lists, which are maintained by the CIA and a covert unit of the U.S. military called the Joint Special Operations Command (JSOC)*, following “determinations” that secret criteria are satisfied. Noble maintains the primary purpose of the leaks of the leak was to terrorize Americans into submission.

Thus far, the only presidential assassinations we know of have been carried out by drones. “Drone Nation” highlights the cold impersonality of a technology that’s conveniently similar to video games teenager males are raised on. Thus it comes as no surprise that drone victims are dehumanized (they’re called “bug splats”) in the eyes of young drone operators who sit behind consoles thousands of miles away.

Nor that drone strikes typically target random groups of people, such as wedding parties. Drone technology has no capability of distinguishing between civilians and combatants. 98.5% of all the people killed by CIA drones are civilians – only 1.5% are so-called “high value targets.”

Even more frightening are the millions of dollars the Pentagon is shelling out for killer robot research, including hummingbird and insect sized drones that require no human operator.

By 2020 tens of thousands of drones will be flying in US skies.

The series ends with a moving tribute to all the whistleblowers who made the documentary Counter-intelligence possible.

*JSOC is covered in Part 1 of Counter-intelligence.