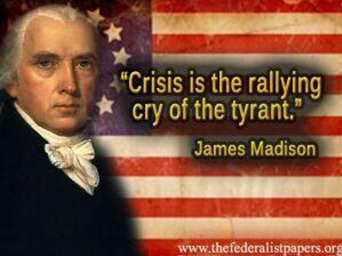 Our fourth American President, James Madison (1751-1836), made some most profoundly prescient statements about foreign wars.

No nation could preserve its freedoms in the midst of continual warfare.

If tyranny and oppression come to this land, it will be in the guise of fighting a foreign enemy.

The means of defense against foreign danger historically have become the instruments of tyranny.

For the last century, America has been led by one war party or another.

Republican administrations (Bush I and II) brought us the wars in Afghanistan and then the Shock and Awe of Iraq and the Second Iraqi War.

Since 1980 (with both Democratic and Republican administrations) the US and NATO militaries have bombed, invaded, or occupied fourteen countries, causing devastation and death for millions of innocent people – all the while claiming that we were bringing those people democracy.

By withholding important data and using outright lies, leaders of both our political parties have justified all US wars during the past century, but have ever remained appallingly quiet about their growing theft of our freedoms.

So which party is the War Party – the Republicans or the Democrats? Both are War Parties that have stolen our liberties for over one hundred years.

But with the Republicans recently gaining control of the Senate, warmonger Senator John McCain is poised to become our next Armed Services Committee chairman.

With this eventuality, the Republicans are likely to become our most virulent war-like political party yet – and that is saying a lot considering the war-crimes record of the Democrats.

No protracted war can fail to endanger the freedom of a democratic country.

A hundred years of wars have all but destroyed the American economy with taxes, while putting us in such a debt-debacle there is not enough money in the world to pay off the interest and principal the private and foreign shylocks claim we owe them.

Worse yet, these wars have taken a most savagely devastating toll on the personal freedoms of those whose nation was once the freest in the world.

The best way to take control over a people and control them utterly is to take a little of their freedom at a time, to erode rights by a thousand tiny and almost imperceptible reductions. In this way the people will not see those rights and freedoms being removed until past the point at which those changes cannot be reversed. – Adolf Hitler

The burgeoning expansion of any slave state depends on foreign wars and the nation’s prior economic freedoms, as such freedoms create widespread affluence.

This wealth attracts thieves, parasites, and psychopathic killers into the nation’s banking establishment and its central government, causing the country’s riches to metastasize into the cancer of a corrupt state. Of course this malignancy is caused by governmental borrowing, income taxes, the offshoring of jobs, and continual wars.

Our country, the United States of America, is the world’s prime example of a nation so eaten up with cancer of the spirit that we have become the foremost terrorist threat on earth, while dying and being enslaved internally.

Those of us ignorantly locked into the engineered left/right paradigm are being imprisoned in the very jails we refuse to recognize.

The British author of such dystopian classics as 1984 and Animal Farm, George Orwell, was far more than a mere novelist. Read his prophetic words below.

Every war when it comes, or before it comes, is represented not as a war but as an act of self-defense against a homicidal maniac.

War against a foreign country only happens when the moneyed classes think they are going to profit from it.

All the war-propaganda, all the screaming and lies and hatred, comes invariably from people who are not fighting.

The nationalist not only does not disapprove of atrocities committed by his own side, but he has a remarkable capacity for not even hearing about them.

How many Americans have heard about our torture of thousands of men, women, and even children in hundreds of military bases around the world?

Since the administration of George Bush II, torture has become an official US policy, but called by the specious and beguiling pseudonyms of enhanced interrogation or extraordinary rendition.

Of all the war crimes committed during the Bush/Obama administrations, the torture of human life is the most hideous and the most difficult to forgive.

CNN tells us that returning US combat troops are killing themselves at the rate of more than twenty-two a day. Could this be a reaction to the horrible things these soldiers did to innocent victims while on combat duty?

Alexis de Tocqueville traveled extensively throughout America during the first third of the 19th century. He wrote, America is great because she is good, and if she ever ceases to be good, she will cease to be great.

How many people know about the legislation called the National Defense Authorization Act (NDAA), which allows “our” government to imprison any American indefinitely – all without the burden of the government proving its case to an independent judge. So much for our Sixth Amendment guarantee of a right to trial.

Aleksandr Solzhenitsyn who brutally knew enslavement first-hand in the Soviet gulags wrote some truths every American should heed.

A state of war only serves as an excuse for domestic tyranny.

The next war may well bury Western civilization forever.

Mahatma Gandhi said, There is no way to peace. Peace is the way. 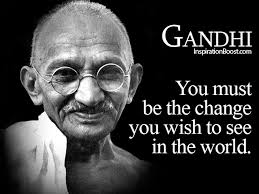 Now that our national defense policy has devolved and degraded into the murder, torture, destruction, and occupation of entire societies and countries, will you pray for those whom we have caused to suffer so?

Will you pray that our countrymen will be absolved from their naive complicity with America’s crimes against humanity?

Will you pray that the dark shroud of oppression and poverty that has been cast over our country be lifted?

Will you foster peace by opposing the repugnant creatures of the War Parties?