Did China Just Scupper the TPPA? 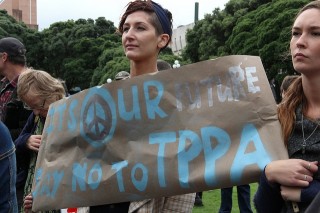 The Transpacific Partnership Agreement (TPPA) is a secret free trade treaty Obama is negotiating with eleven other Asian Pacific countries (US, New Zealand, Australia, Malaysia, Japan, Chile, Peru, Canada, Mexico, Vietnam, Singapore and Brunei). The President had hoped to seal the deal at the recent Asian Pacific Economic Cooperation (APEC) summit in Beijing. Instead all 21 Pacific Rim countries have agreed to develop a roadmap for a Free Trade Area of the Asia-Pacific (FTAAP) treaty. The FTAAP would include China and Russia, whereas the TPPA excludes them.

The TPPA is viewed as a centerpiece of Obama’s “strategic rebalancing” towards Asia. Also known as the “Asian pivot,” Obama’s intention is to counter China’s growing economic strength by isolating them economically and militarily.

The US has required the twelve countries participating in TPPA negotiations to sign a secrecy clause. Only corporations (i.e. the 600 corporations that helped write it) are allowed to see the text of the treaty. Not even Congress is permitted access. If Wikileaks hadn’t leaked large sections of the draft agreement, we wouldn’t even know it existed.

Is TPPA Really a Trade Treaty?

Scheduled to coincide with the APEC summit, November 8 was an International Day of Action against the TPPA, with major protests in New Zealand, Australia, Malaysia and the US. From the sections which have been leaked, it seems the TPPA isn’t a trade treaty at all. It’s really an investor protection treaty, granting corporations the right to sue countries for laws that potentially hurt their ability to make a profit. These lawsuits, involving hundreds of millions of dollars, would be heard by secret tribunals run by corporate lawyers. There would be no right of appeal.

In other words, the intent of the TPPA is to allow corporations to overturn the environmental, labor and healthy and safety laws and regulations of member countries. There’s even a special “transparency” clause inserted by the pharmaceutical industry that would allow them to challenge formularies (in the US this would include Medicaid and the VA) that promote cheaper generic medications.

It’s pretty obvious why Obama is trying to negotiate the TPPA in secret. Prior investor protection treaties (e.g. the Free Trade of the Americas Agreement) have gone down in flames thanks to massive public lashback, both in the US and in treaty partner countries.

Congress isn’t too happy, either, about being denied access to the draft TPPA treaty. In November 2013 Congress voted down Obama’s request for “fast track” authority on the TPPA. Fast track, otherwise known as Trade Promotion Authority, would require Congress to accept the final TPPA deal or reject it. No debate would be allowed on specific provisions.

There are rumors Obama plans to reintroduce TPPA fast track authority before Christmas, hoping for a better outcome with a new, pro-business Republican congress.

The POTUS also had hopes of ramming through an agreement on the TPPA treaty in Beijing, at a side meeting in the US embassy. It appears he did try and failed, as Pepe Escobar describes in a recent RT article Lame Duck Out of the Silk Trade Caravan.

The Effect on Australia and New Zealand

A trade deal that excludes China, their major trading partner, makes absolutely no sense for Australia and New Zealand. Kiwi and Aussie environmental and labor activists are also deeply concerned about signing an international agreement that allows multinational corporations to sue their governments in a secret corporate tribunal. They’ve worked damned hard to win laws and regulations guaranteeing minimal environmental, labor and health safety standards. If the TPPA goes through, these could all be wiped out with the stroke of a pen.

China Aims to Suppress US Influence in Asia

In an interview with Chinese media, Obama denies he was trying to isolate China by pressuring Asian Pacific countries to sign a secret trade deal that excludes them. Yet it’s pretty obvious to all concerned that’s exactly what he’s trying to do.

It’s also pretty clear that Chinese president Xi Jinping outmaneuvered him. In addition to getting all 21 APEC nations to sign onto an FTAAP feasibility study, China signed other trade deals geared towards reducing US dominance in the region.

On Monday the Chinese and Malaysian central banks signed a deal to establish a yuan clearing bank (to facilitate energy and other trade deals in local currencies rather than US dollars).

Russia and China signed a  similar deal to conduct oil trades in rubles and yuan, rather than US dollars. According to Russian president Vladimir Putin, the new agreement will significantly reduce US influence over world energy markets.
Back in October,

Back in October, China launched the Asian Infrastructure Investment Bank a rival to the US-dominated World Bank and Asian Development Bank.