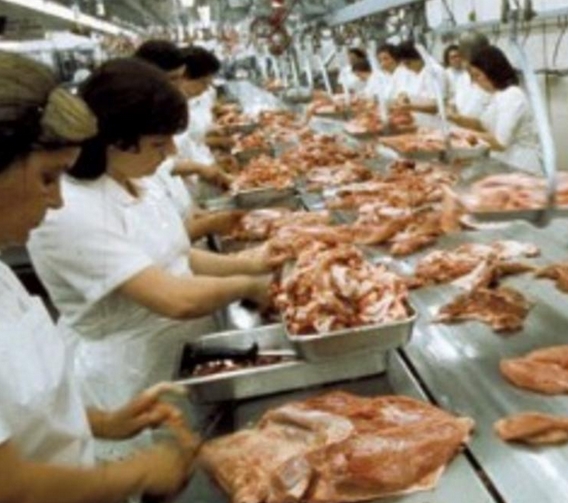 Most experts agree America has at least 12 million undocumented workers, “illegal aliens” as it were.  The real number is higher than 20 million.  The GOP/Tea Party would tell you they will take your jobs if they are given photo ID, put on social security and are “documented.”  Listen up, they took your jobs years ago.
The history behind the level of illegal immigration we are seeing now dates to the late  1960s.  The Imperial Valley Growers Association, the largest political slave labor front group in America at the time, had bought themselves an actor named Ronald Reagan as governor. They had been living on seasonal migrant labor but that “business model” was no longer working.  Caesar Chavez and the United Farm Workers were putting an end to that.

These were boom years in the US, welfare, ADC (Aid to Dependent Children) was available and easy to get.  Why bring in workers seasonally when you could keep them around all year and have Lyndon Johnson’s welfare state support them.

In order to smash the UFW, they turned to Reagan and to organized crime, bringing the Teamsters Union and Jimmie Hoffa into an open war against Chavez.  This was how it started, how the model began, but it went much further and as everyone today knows, covers the entire United States, the “Sweatshop United States of America.”
Reagan made sure half of California and most of America’s southwest would speak Spanish, pay no taxes and work for as low as 45 cents an hour.
Soon nearly every industry began either using illegal sweat shop labor or setting up “outsourcing” non-union contractors.  NAFTA took it further, simply exporting half of America’s jobs to “below the border” factories where the workers live in cardboard boxes in what in America would be an employee parking lot.
Still there were many things that required millions of aliens here, construction for sure, agriculture, meat packing and, of course, lawn work, cleaning swimming pools, maids and house boys.
They bought Reagan into the governorship and later, with other “sweat shop” groups like the US Chamber of Commerce and the National Association of Manufacturers, into the White House.
Tonight, America’s remaining unions are forcing President Obama to end the sweat shop game that is destroying American jobs.  Those stupid enough to listen to Alex Jones and the Fox News/Israeli mafia gang need no convincing.  Talking to a bowling ball would be more useful.
It was Reagan and then Bush and Bush again that opened the borders allowing tens of millions of illegals to flood into the US.  Here’s how the game works using “undocumented workers.”

One key issue is “Workman’s Comp,” the insurance employers pay to states based on the occupation.  Consider this; illegal aliens typically are funneled into the highest insurance rate jobs, some that have “comp”rates of over 500 a month like roofers and meat packers.  When there is an accident, employers simply call ICE to have the one handed meat saw operator sent back or let welfare take care of them.

Can anyone tell me they never heard of this game?

For those who haven’t noticed, no president has sent more illegals back over our borders than Obama.  The unions demand it.  The GOP protects them by such unseen acts as not allowing immigration officers access to restricted federal land that provides a protected corridor for thousands of illegal aliens a day.

Blocked appointments and “in place” Bush era moles keep the endless highway of sweat shop workers, along with other trafficked humans, women and children for the Washington DC sex and sacrifice trade, one just like Britain but we have no newspapers to report it.  Don’t wait for Alex Jones or his friend Hannity to say something.

No one is hunting down 20 or 30 million sub-minumum wage workers with no Social Security, who pay no income tax or state and local taxes.  You pay those bills too, consider it another way of subsidizing American business.  Every illegal alien using benefits, a model that has made the Walton/Walmart family quite comfortable, is working for the Republicans who pretend they oppose it.

For those of you who failed to think about the absurdity of it all, who believed that American workers wanted millions of illegal aliens pushing down wages and adding to corporate profits, any attempt to communicate is obviously futile.

What was it that Forrest Gump said, “Stupid is that stupid does?”