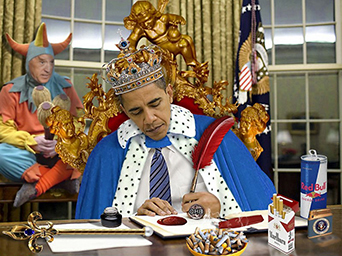 Some call it governance by fiat; others say it is dictatorial rule. But in any case, Mr. Obama has once again proven he works not for the American people, but for some subhuman force that goes unseen.

It is true that creating laws should not be within the power of a president, or prime minister, of any democratic nation; but, that is not Obama’s only crime tonight.

Slickly reading from his teleprompter, Mr. Obama never tells the whole story, only the few bright spots in an otherwise grim tale. What is going on in America, Europe, and all the English-speaking nations by allowing mass immigration is a planned destruction and elimination of each nation’s national identity, culture, and ability to be independently self-supporting.

The Satanic scourge that controls our world has decreed that no nation is to be allowed to feed itself outside of world trade. In this way, economic sanctions can be brought on any nation that attempts to exist outside the bankers’ exploited control grid.

For any national leader who somehow manages to prosper in spite of economic or trade sanctions there are always the bombs from the US/NATO arsenal that will surely bring about regime change. Remember Libya’s Muammar Gaddafi? How about Iraq, Afghanistan, or Syria?

The multilateral trade and economic sanctions imposed by the US, and her allies, on various countries are immoral acts, as they impoverish, starve, sicken, and kill millions of innocent people.

Today, international trade sanctions can be devastating on any nation. It has been reported that our sanctions on Iran have already caused the death of more than 500,000 babies and children – something that Czech-born, former US Secretary of State Madeleine Albright termed as totally acceptable, when referring to the many hundreds of thousands of children we have killed in Iraq with our sanctions and bombs.

Not so long ago, the American family farmer could have fed the entire world, the last thing the banker Controllers would accept. So they went about their dirty work. Today, with the Controllers’ huge, tax-supported factory farms, we can’t feed ourselves anything beyond poisoned GMO foods.

Perhaps in our lifetime, the Englishman as we have known Englishmen will not exist.

The English government has been bringing in hundreds of thousands of Africans, Turks, and Arabs to dilute and weaken the English nation, with only the treacherous English nobility and royalty left of what was once a proper English state. The same has been happening in Canada, Australia, Germany, France, and the rest of Europe.

The liberals say, “We have a heart, and that’s why we welcome the downtrodden.”

What the liberals do not say is how they support the duplicitous elite who poison, disable, starve, bomb and kill the masses of downtrodden in all manner of ways, or how they – the liberals – are always ever busy destroying their own countries by making them unable to help themselves, much less help others.

We hear much about the great value of diversity. Know why? Because it will lead to a low-grade melting pot, with a total absence of diversity. Diversity is not the Controller’s goal, it is their method of reaching their goals of one government, one race, one ignorant and enslaved people.

In 1965, our US population was around 194 million people. It was then that the Immigration and Nationality Act was passed and signed into law. Since then, we have added over one-hundred million people, mostly as a result of the reform of our immigration laws. These same laws will, however, likely add one-hundred million more new immigrants, from 140 countries, to our nation in the next thirty years.

The president and Congress have both said these immigration laws are broken. Not broken because they allow too many immigrants into America, but too few.

That is the truth that the Controllers want hidden behind a screen of TV sound bytes concerning the pretended rift between Obama and the Republican Congress.

If our esteemed members of Congress were really worried about the presidency usurping their authority, where was their concern when past presidents violated the US Constitution with their thousands of pages of Executive Orders?

And where were these pretenses in Congress when Presidential Executive Orders made the torture of human life around the world in over 700 military bases official American policy?

As the Controllers planned, the national discourse concerning our self-defeating Immigration and Nationality Act of 1965 and the Reform and Control Act of 1986 has shifted to the Republicans in Congress suing the President for over-reaching with his latest Executive Orfers.

Long ago, government in the United States of America degenerated into bad theater with ugly, shabby, and traitorous actors.

Ronald Reagan was their best actor, as he fooled a lot of Americans and Europeans into thinking he actually made at least a few decisions of and on his own.

The calls to overhaul our immigration laws are the battle cries of those who are attempting to reduce Americans to the lowest common denominator. The white American and European is their last and most formidable obstacle.

The truth that the white man is targeted by the New World Order with its every round of immigration laws is made to sound like the ravings of a lunatic.

In fact, any real truth exposing the Controllers is made by their corporate media to sound much like ignorant drivel, which all knee-jerk Democrats, and most Republicans, swallow completely.

But what else can we expect from a nation of people who do not have the ability of independent or critical thought?

Sadly, the majority of American thinking comes from news bytes like those said by President Obama tonight, as he smiled with his pauses and “ahs” to a zombified television audience.

Yes, the New World Order of lords and their minions is composed of white men, but white men of an especially dark and negative breed – the kind that utterly despise anything that is even slightly decent.