Two month ago, we became aware of an utterly gross video ‘installation’ by Natalie Cohen-Waxberg. In the video, Cohen-Waxberg poo-ed over many national flags including Arab flags. Apparently, smearing other people’s symbols with human excrement is consistent with Jewish cosmopolitan ideology. At the time, I didn’t notice any Jewish Left organisations criticise Cohen-Waxberg’s production. For obvious reasons, I do not want to embed her video into this article. If you want to watch this despicable piece of ‘progressive art,’ you can follow this link:  http://vimeo.com/100127568

Last month, we watched David Sheen and Max Blumenthal chase Gregor Gysi, the head of the German left, into the toilet.

Elementary decency is obviously not something we should expect from that bunch of ‘good Jews.’

Soon after being caught on camera attempting to push into a toilet cabin with another man, Blumenthal gave an interview in which he expressed the worst form of vile Goy-hatred. He denounced ‘German pathology’ and referred to German sickening society.

The hatred of Jewish progressives for the Goyim and the nations of the world is cause for great concern. History reveals that it wasn’t Zionism that disturbed the National Socialists and many Europeans in the 1930’s; it was actually Jewish cosmopolitanism and cultural Marxists. 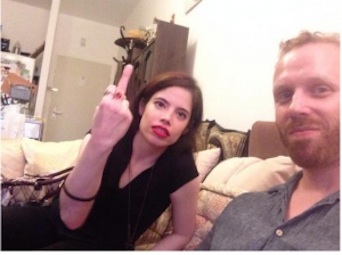 Apparently, the link between Cohen-Waxberg and Blumenthal is more than just spiritual. In the following photo, which I assume to be genuine, the kaka artist Cohen-Waxberg is caught on camera together with the pathological goy hater Blumenthal. They seem united and cheered.