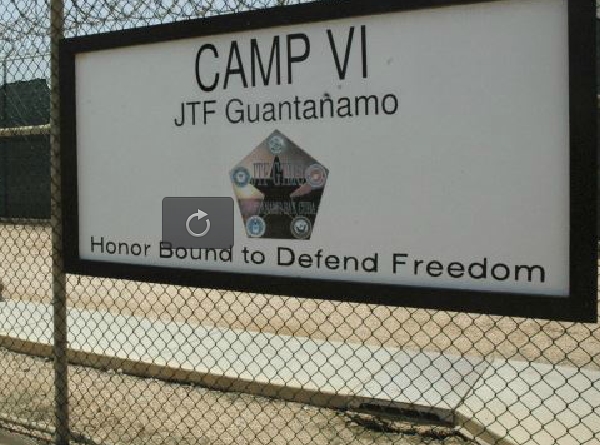 File photo of the Guantanamo prison
[youtube oeuaFpC4Dr4&feature=youtu.be]
In an open letter published in the Daily Mail, they also called the detainee Shaker Aamer’s continued detention “shocking.”
The campaign, called ‘We Stand with Shaker’ urged Prime Minister David Cameron to “pick up the phone to [US] President [Barack] Obama, and bring Shaker Aamer home.”
Aamer is a Saudi Arabian national with residency in Britain.
“What the US would like to do with Mr Aamer is irrelevant, as the British government has a non-negotiable responsibility to secure the return of Mr Aamer, given his status as a legal British resident,” the letter read.
It went on to say: “We can find no reason why, given the special relationship between our two countries, the PM cannot call President Obama and tell him that Mr Aamer must be returned to the UK as swiftly as possible.”
This is while Gordon Duff, the senior editor of Veterans Today, has told Press TV’s UK Desk that he does not “think the British government has ever taken a role of confronting the US about Guantanamo. They have as many secrets involved in the rendition program as anyone else.”
Duff said: “We get almost no news [out of Britain as it] has a very secretive government and no public press whatsoever. Britain is heavily involved and has been from the beginning not only in the rendition program but Britain’s internal politics has been involved in large scale blackmail.”
“These stories are continually being deflected and ignored and not leading to the truth that Britain has a totally penetrated and utterly corrupt government,” he went on to say.
Britain’s Guantanamo detainee is accused of having worked for al-Qaeda in Afghanistan and that he was a key recruiter in Britain, and supporter of the militant group. Aamer was captured in Afghanistan in December 2001 and was transferred to Guantanamo in February 2002.
Meanwhile, the UK MPs’ petition said Aamer had been cleared for release twice by US authorities, in 2007 and 2009, but this had never gone ahead and that there may be plans to deport him to Saudi Arabia.
“From there, Mr Aamer would be unable to talk about the torture and abuse he has witnessed and personally experienced during his long imprisonment,” it said.
The petition comes after the release of a damning US Senate report into the CIA’s torture of the so-called terror suspects.