The hypocrisy of Hollywood seems very much to keep pace with that of Washington and the mainstream media, although this should come as no surprise to anyone.

Is it hard to imagine why Koreans would take offense at the film “The Interview,” a comedy about a supposed plot to assassinate Kim Jong-un, or why a group of Korean hackers would target the studio which produced the film?

A movie about an assassination of a national leader – not just a fictional leader, mind you, but a genuine, real-life head of state – is not exactly something to be sneezed at, given the sort of world we live in. Let’s suppose for a moment the shoe were on a different foot. Imagine if someone were to produce a comedy about, say, the assassination of the prime minister of Israel. It would make for a hilarious film, would it not?

Imagine the uproariously funny scene that could be included depicting Netanyahu going before the United Nations with his cartoon bomb? Or imagine the prime minister’s cabinet members shown publicly hurling insults at US officials like John Kerry? Wouldn’t these things be funny? Couldn’t they easily be transformed into a brilliant comedy?

There might also be a scene showing Netanyahu discussing the slaughter of 2200 Gazans and referring to it as “self defense,” and although this probably wouldn’t be quite as amusing as the other scenes, it certainly could be included in some of the 90-minute comedy’s more subtle, somber moments. In short, we’ve got the potential here for an entertaining and funny movie.

But don’t expect the makers of “The Interview” to produce such a film. Hollywood has a formula that it goes by. Part of this formula is, of course, devotion in service to the god of money. But there are a few other gods Hollywood serves as well, for it is also very much a Weltanschauung of Jewish tribal coloratura.

The Interview is directed by Seth Rogen and Evan Goldberg, both Jews. Rogen’s parents reportedly met on a kibbutz in Occupied Palestine, while Goldberg once referred to non-Jews as “stupid Jews” because they laugh at Jewish jokes. In the photo below Rogen and Goldberg are both shown in 2013 at a comic book convention where they appeared to promote their movie “Sausage Party,” described at the time as “a raunchy, new R-rated animated comedy.” 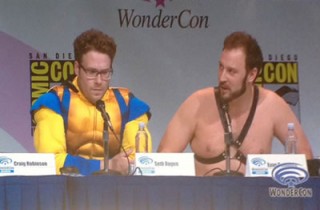 Rogen and Goldberg have reportedly been friends since childhood, and both got an assist in their careers by Judd Apatow, executive producer of the TV series “Freaks and Geeks,” and who is, yes you guessed it, also Jewish. Another actor who got his start in the same series is James Franco. Franco is now co-starring, with Rogen, in “The Interview.” Small world, eh? And of course–you guessed it again–Franco is also Jewish.

In “The Interview,” Rogen and Goldberg portray Kim Jong-un as an unsympathetic character who at one point in the movie is depicted as defecating on himself. The Korean hackers who targeted Sony Pictures disclosed, among other things, that Rogen was compensated $8.4 million for the movie, and also posted data showing inequality of pay between men and women at the studio.

The hackers also, by the way, released a private email exchange between Sony executives Scott Rudin and Amy Pascal in which both engaged in racist stereotyping. Rudin and Pascal are also Jewish.

The mainstream media have, of course, turned the whole hacking incident into a melodrama. Sony at first announced that it was withdrawing the film, but then changed tack and released it in selected theaters on Christmas Day. A Reuters report describes the film as “steeped in gross-out, bathroom humor,” but also reports that it managed to rake in $1 million in box office receipts on opening day.

The hoopla over the affair also seems to have prompted a US cyber attack on North Korea, resulting in a nationwide Internet shutdown that the country still has not completely recovered from.

The whole thing strikes me very much as a byproduct of “American exceptionalism,” and perhaps worth noting here are the recent comments of the Russian Foreign Minister Sergei Lavrov, who characterized this uniquely American idiosyncrasy as a “global threat.”

Lavrov is spot on–and who knows? Perhaps Hollywood, the US State Department, and USAID plan to join forces. Or perhaps they even already have. With “The Interview” now out and available for viewing, could other comedies about other world leaders the US wants to see removed be very far behind? Hard to say at this point. But it’s certainly worth keeping in mind.