Sometimes whenever I want to laugh, I’d just pick up some crazy articles by some members of the Dreadful Few and start reading some of the blatant contradictions.

Yesterday was one of those days.  I was doing some research on North Korea and trying to catch up with my reading during vacation and suddenly I stumbled upon Daniel Greenfield’s article entitled “Hollywood’s Last Stand.”

Keep in mind that Greenfield is “a Shillman Journalism Fellow at the Freedom Center,” “a New York writer focusing on radical Islam,” and “is completing a book on the international challenges America faces in the 21st century.”

Now let us read a few lines from the article:

“Americans are the only people in the world who go to see movies in which they are the villains. Russians stayed away from Jack Ryan Shadow Recruit with its Slavic villains (though Chinese audiences liked it well enough).

“And movies with Chinese villains can’t get made because the People’s Republic has more devastating penalties for offending studios than a mere hacking. Instead of leaking private emails, the studios simply aren’t allowed to release their movies in the world’s second biggest film market.

“Hollywood’s titans take a break from patting themselves on the back for their commitment to freedom of expression and eagerly rush to work with the censors of the Chinese Communist Party to make their movies acceptable to China.

“Muslim villains can’t appear in movies at all since September 11. The last time a movie had a villain named Mohammed, the filmmaker ended up hauled out of his home and tossed into jail. Hillary Clinton, Hollywood’s choice, had assured grieving Benghazi family members that instead of punishing their son’s killers, she would ‘have that person arrested and prosecuted that did the video.’

“With script control like that, it’s no wonder that you don’t see many Muslim movie villains.”[1]

Muslim villains can’t appear in movies at all since September 11? Is this man living in the twenty-first century? Don’t movies like Iron Man (2008) and Dark Knight Rises (2012) implicitly portray Muslims (or countries in the Middle East) and Russians as diabolical villains?

Did Greenfield see Equalizer, which explicitly portrays Russians as thugs, pimps, and drug dealers? How about Salt, starring Angelina Jolie?  Why don’t they ever portray Israelis as villains? Why don’t the Dreadful Few make a movie about the Levon Affair? How about the bombing of the King David Hotel? Don’t they boast about being opened-minded? 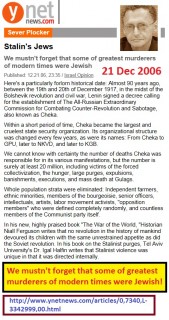 Now let us turn the table around. When Mel Gibson’s The Passion of the Christ came out, Jami Bernard of the New York Daily News wrote that it was

“the most virulently anti-Semitic movie made since the German propaganda films of World War II.”[2]

“Gibson’s film takes the fetishizing of horror and death that exists within Christianity to some sort of sickly logical conclusion.

You see, when the Goyim are humiliated and denigrated in movies, that is freedom, but when Gibson tries to get closer to the historical accounts, he is by definition an anti-Semite!

“The trouble with Mel Gibson’s film ‘The Passion’ is not the film itself,” he writes, “but the gospel story on which it’s based.

“The gospel story, which has generated more anti-Semitism than the sum of all the other anti-Semitic writings ever written, created the climate in Christian Europe that led to the Holocaust. Long before the rise of Adolf Hitler, the gospel story about the life and death of Jesus had poisoned the bloodstream of European civilization.”[4]

This is the prevailing way of looking at the gospel accounts or anything that portrays Jews as villains.

Jewish professor Paul Fredriksen declared when The Passion came out,

“When violence breaks out, Mel Gibson will have a much higher authority than professors and bishops to answer to.”[5]

The Los Angeles Times added that the movie is “a gasoline-soaked rag tossed on the already roaring flames of anti-Semitism.”[6]

“By the time the first nail is hammered into the cross, viewers in Germany will be passing around knife sharpeners in the theater. Israel may have to absorb a massive flight of European Jewry.”[7]

Jewish novelist and television writer Howard Fast wrote in The Jews: Story of a People that

“unless Christians finally come to understand the bitter and almost inadmissible truth, that the murder of six million Jews by the Germans was the final, hideous outcome of a Christian ideology that had spent two thousand years teaching mankind to hate the Jews—then the crucifixion of the Jews and the connected inhumanity of the Christian will continue, on and on, until finally mankind, in the name of that gentle Jew Jesus, who died without ever hearing the word Christian or knowing what agony his own people would suffer in his name, destroys itself.”[8]

The answer is a resounding no.

Greenfield certainly has to seriously explain why we have not seen a movie about Joseph Stalin torturing and pillaging peasants, Christians, political dissents, etc. Until he does that, we will continue to laugh about his moaning.

[2] Ben Child, “Jim Caviezel Claims the Passion of the Christ Made Him a Hollywood Outcast,” Guardian, May 3, 2011.

[5] Klinghoffer, Why the Jews Rejected Jesus, 2.