Home Investigations White House to Israel and France: “Screw You!”

You will never hear this in the mainsteam news.  In fact, in order to cover up the White House ban on any backing for the Netanyahu led Paris “march of humiliation” of the recent false flag attacks, the BBC actually issued its own “false flag,” a phony article citing a non-existent White House apology.

In fact, Obama, Kerry, Holder, Biden and all congressional leaders sat this one out, Netanyahu and his hand puppet’s Merkel, Hollande and whatever stooges “money could buy” lined up in Paris to cry over what was clearly an Israeli staged attack.

Sources indicate that Lieberman and Netanyahu arranged for the attack during a Christmas visit to Paris with a 550,000 Euro payoff to Hollande, to finance his next election, part of the sweetening.  Just after New Years, teams began arriving to set up the operation. (See Addendum II)

The “flagship” of the false flag was to be the video of the execution of a French police officer, an epic “fail” as the coup de grace shot to the head was ill timed.

Sources indicate that the teams, including those dressed up as terrorists carrying AK47 rifles loaded with blanks, those blocking both pedestrian and automobile traffic on the street and arranging the video, actually murdered the police officer using pistols, several feet from the staged attack, only moments later. (Fiasco France: Lie to Me Once)

Video analysis, both amateur and professional, easily yielded the same results, blanks fired into a pleading police officer who mistakenly collapsed to the ground well after the close range rifle shot to the head intended to appear as an execution.

Washington staffers were quick to note the obvious fakery and issued blanket warnings to even Israel’s closest friends in the US to find any reason imaginable not to show up in Paris.

Below, Addendum I, the phony BBC Story:

The US government has said that it should have sent “someone with a higher profile” to Sunday’s Paris unity rally.

It comes after US media criticized President Barack Obama and Secretary of State John Kerry for not attending the demonstration.

The rally, which followed three terror attacks in Paris, was attended by an estimated 1.6 million people and some 40 world leaders.

The US ambassador to France was the highest ranking US official attending.

Speaking on Monday, White House spokesman Josh Earnest said President Obama wished he could have attended, but the “onerous and significant” security preparations for a presidential visit required more than the 36-hour advance notice the White House received.

He added, however: “It’s fair to say that we should have sent someone with a higher profile.”

Seventeen people died in attacks in Paris last week at a satirical magazine, on a police officer, and at a kosher supermarket.

‘Not about one day’

Mr Kerry told reporters in India he would visit France to reaffirm US solidarity with the country, which he called America’s oldest ally.

A fluent French speaker, he has visited the country 17 times since becoming secretary of state. 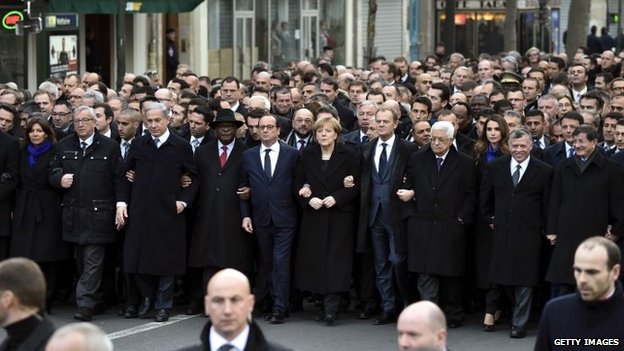 About 40 world leaders and dignitaries marched arm in arm

US Attorney General Eric Holder, in Paris for an anti-terror summit, did not attend the march because he was giving media interviews.

“I would have personally very much wanted to have been there,” Mr Kerry said, but “it is important to keep these kinds of commitments”.

Mr Kerry said US officials, including himself and Mr Obama, had been “deeply engaged” with French authorities since the first attack and had offered intelligence assistance.

“I want to emphasize that the relationship with France is not about one day or one particular moment,” Mr Kerry said.

We had Israelis swat on the ground in the MK shop. One guy was arrested before the shooting of Amedy Coulibaly.

We’ve warned early December that Israelis were to organise a false flag, a French 911, nuke some some nuclear plant or chemical attack. Marseille was the target, and MH370 copy was parked on the Tarbes Lourdes military airport in October 2013 before the flown it to Tel Aviv.

We believe US NEST (nuclear emergency) team flown these drones over he nuclear plants to confirm if a nuclear plant attack was on the way… it caused serious trouble to Hollande, and Cameron. both are Netanyahu network and terror hands in EU. This 911 was designed to invade Libya and then finish destroy Algeria and the rest of the Sahara.

Hollande is now financed by Lebanese-Saudis circles via the French military arms contract given to Lebanon, 3.5 billions dollars, confirmed in November 2014. Money will be given under the table via the bankster, advisor of the king of Morocco and intel officer Andre Azoulay… who has brothers working for the Mossad as well.

We believe, with strong infos that Hollande will receive 550 million euros for 2017 presidency election running and that Avigdor Lieberman who came with the head of Mossad the 25 December 2014. Apparently Washington wanted Hollande to give some money for Lieberman to run against Netanyahu… and this sparked fury in Tel Aviv. Washington would like also Holland to put a UN resolution to fix peace deal and state recognition for 2016 or 2017… Netanyahu threatened Hollande that the recognition of the Palestinian state will be trigger terrorism in France.

In December a young French-African died in a police station he was shot dead. Medias blamed ISIS, it was in Joue-les-Tours. Witness confirmed that the young man never shouted Allah Akbar and there were CCTV removed from the police station. Then in Dijon and Nantes, two drivers killed people shopping for Xmas. Like what is happening in Al Aqsa were some Palestinian drivers killed settlers with cars and settlers do this since years without attracting medias attention… But these were the first alerts. Then we warned of Israeli attacks in Paris and Marseille openly as we had some hints about possible drills in France during the Xmas period. These happens to start the 5 Jan 2015.

First target was the French-Algerian-Israeli Eric Zemmour, right extreme right wing, xxxxx will know him, who told that the European Union should deport the Muslims, it was in December 2014. He was doing the job of Charlie Hebdo but in the right wing spheres… He blew the whistle on the false flag 29 Dec 2014.

We gave French intel a strong warning during the 23 December we said police and gendarmes will be the targets of people in stolen cars who will kill them in faction. We said that car bomb will be used…. the Mossad chief was in Paris the 25 Dec 2104 with Lieberman

In Algeria the 6th Jan 2015, shale gas exploratory well was stopped due to people demonstrating… shale gas is a French project entirely driven by the Bouteflikas, working for French-Israelis… the 7th Jan at 11H30 Paris time the false flag started. We had a car that exploded near a synagogue in Sarcelles, north of Paris.

When the third man was at school and proven at school, after they claim to find the brother IDs in the car. They then launched Amedy Coulibaly who was accused to be the killer of one policewoman in Montrouge, and bombed two cars in Villejuif. These are stories created by the DGSI. Coulibaly was brought to the scene after the third man was confirmed at school. This was the second blew up of their false flag, the first came with the cop killed as you demonstrated he was not…

Cameron will do exactly as Sarkozy in 2012, as he lost the elections of May 2015… he is done.. we sid that on the 12 Dec 2014 morning, evening the flights were all diverted from London…

The reason the Libyan planes were stolen this summer by MI6 and one by the DGSE-Mossad, the same who killed Stevens by the way… but pilots are Ukrainians. Remember a flight full of Ukrainian mercenaries was blown up in Algeria desert in August 2014… this is directly related… The Libyan planes were fitted with military transponders and used NATO flight path in EU… These flight are also known to have Moroccan, Algerian, Tunisian and Egyptian ID transponders.

So they will decide which country they will frame, most likely Algeria whose planes were stopped in Belgium, one was blown up as AH 5017. French defense minister was in Riyadh the 4th Jan 2015, and he confirmed that Libya will be invaded within 3 months… After Dempsey and Russian, Iranian closed the door to Israeli ISIS project to free Kurdistan for December 2014 and make it the gas station for Tel Aviv… Libya is then the last chance for Netanyahu to ensure he can run the country.. he lost in Gaza, with ISIS, undermined now… Libya is his last chance

As you could have seen Israeli swat and Mossad were running the drills, they were in the kosher shop and they probably killed Amedy Coulibaly, the 4 Jews/ Coulibaly semlles DGSE as well, who were in touch with the brothers Kouachi and with the DGSE officer David Drugeon, Dempsey claims Drugeon is DGSE, he is right, he trained the guys for the false flag. see McClatchy report and internal Pentagon review of the 8 Jan 2015. The issue with the stories with ISIS and Al Qaeda is that they are fighting… Qaeda saying ISIS is Khawarij, sect…. so as Holder, Dempsey said, it was a French-Israeli job.

xxxxxxxxxxxxxxxxxxxxxxxxx, they tried to put the blog out, we know why now you have Parker pic on the blog with regards to this attempt now there is a civil war in France, 10 millions Muslims living in it.. clash of civilisation was done as the two 911’s were stopped on Marseille, MH370 and french Chernobyl.. Tel Aviv needs a new 911 to continue her crusades otherwise Bibi will lose the 17 March 2015 election… Hollande was caught red -handed and is obeying Washington orders, but Bibi re-enforces his authority on him with this mini 911…

Videos shows Coulibaly was handcuffed when killed, confirming a drill… the first man arrested earlier was not killed, why? who is he? video on the blog as well…