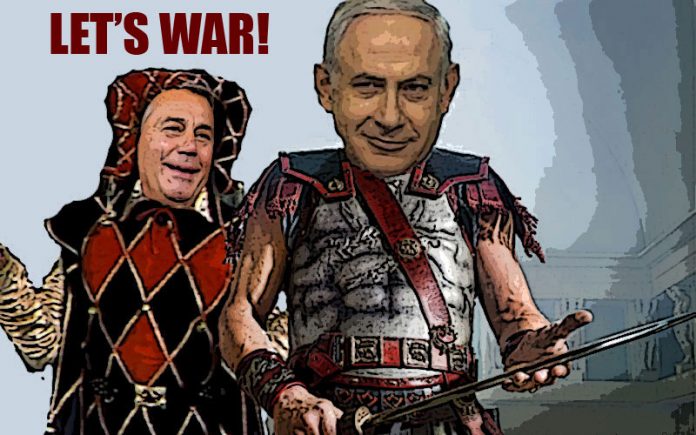 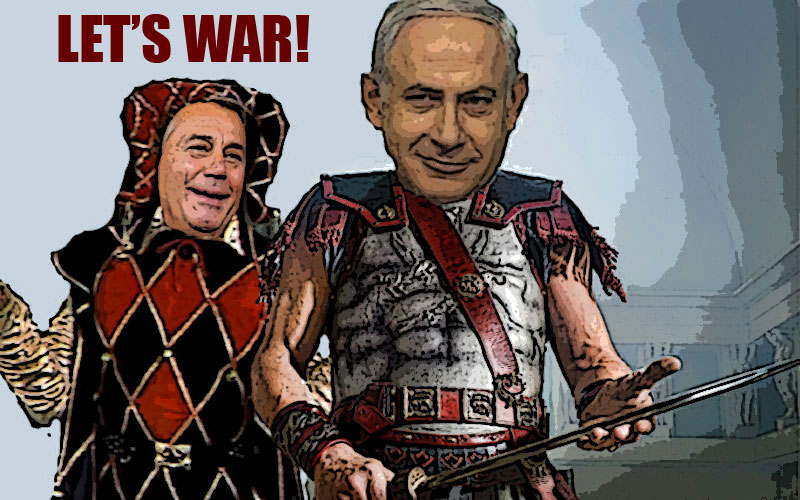 Here we go folks! U.S. House Speaker John Boehner is setting up his most dramatic foreign policy confrontation with elected U.S. President Barack Obama to date, inviting Israeli Prime Minister and his de-facto U.S. President Benjamin Netanyahu to speak about Iran before a joint session of Congress on Feb. 11. Mark your calendars! The event will be an amazing pornographic circle jerk as U.S. congressional minions fight over who can kiss the shoes of Global War Criminal Caesar Netanyahu in hopes of gaining his favor.

Boehner’s appointed U.S. President Netanyahu is a maniacal fierce opponent of the emerging U.S. nuclear agreement with Iran and has served as Obama’s foil, of sorts, as the negotiations have progressed. And his visit to Washington aims to put pressure on U.S. Congress to stand with Boehner’s U.S. President Nentanyahu or face the wrath of global bankster, creeps, criminals, and other unseemly characters that will ruin their careers if they stand with that “schwartze” as Netanyahu and his assigns privately refer to Obama. (“schwartze” is European Yiddish for “person of color”)

Netanyahu’s speech presents an unbelievable spectacle never seen in Washington — the leader of another nation, standing just blocks from the White House at the invitation of Congress to provide his minions the real United States’ foreign policy and that ridiculous non-sense present by the the “schwartze”.

In fact, Boehner did not consult with the White House or the State Department about inviting his appointed U.S. President Netanyahu — a snub that White House spokesman Josh Earnest politely and meekly called “a departure” from protocol. Instead, Boehner’s and Senate Majority Leader Mitch McConnell’s staff coordinated with Ron Dermer, the Israeli ambassador to the U.S.

The idea has been under discussion in Republican leadership since before the 2014 midterm election. On Jan. 8, just two days after Boehner was reelected as speaker, he called Dermer — a native of Miami Beach, graduate of the University of Pennsylvania and close adviser to Boehner’s appointed U.S. President Netanyahu — to gauge the prime minister’s interest. The Israeli Embassy gave a “quick affirmative response,” a Republican aide said. Boehner’s office then provided a list of possible dates for an address, and the embassy chose the week of Feb. 9.

Boehner was plainly unapologetic about NOT consulting the White House or State Department.

“Congress can make this decision on its own,” Boehner told reporters. “I don’t believe I’m poking anyone in the eye. There is a serious threat that exists in the world, and the president last night kind of papered over it. And the fact is that there needs to be a more serious conversation in America about how serious the threat is from radical Islamic jihadists and the threat posed by Iran.”

Earnest told reporters that the White House learned of the invitation Wednesday morning before Boehner’s announcement.

“The typical protocol would suggest that the leader of a country would contact the leader of another country when he’s traveling there,” Earnest said during the president’s flight to Boise, Idaho. “That certainly is how President Obama’s trips are planned when he travels overseas. This particular event seems to be a departure from that protocol.”

Asked whether Obama would meet with Netanyahu, Earnest said, “We haven’t heard from the Israelis directly about the trip.”

Taking a somewhat softer tone, Secretary of State John Kerry later said that Netanyahu is welcome to give a speech in the U.S. at “any time,” Agence France-Press reported, though he conceded that it was a “little unusual” to hear the news from Boehner’s office.

Netanyahu, who faces an election in March, has repeatedly tangled with the Obama administration over issues like Iran and peace talks with the Palestinians. He has also sometimes faced Democratic accusations of attempting to interfere in U.S. politics, for example by allegedly siding with Republican nominee Mitt Romney in the 2012 presidential election. The Israeli government has rejected those charges.

Boehner announced his plan Wednesday morning in a House Republican Conference meeting, and it was warmly received by the rank and file. Boehner’s appointed U.S. President Netanyahu is a uniquely popular figure in American politics whose appeal — and, indeed, Israel’s appeal — transcends party lines.

“You may have seen that on Friday, the president warned us not to move ahead with sanctions on Iran, a state sponsor of terror,” Boehner said in the Republican meeting. “His exact message to us was, ‘Hold your fire.’ He expects us to stand idly by and do nothing while he cuts a bad deal with Iran. Two words: ‘Hell no!’ … We’re going to do no such thing.

“I am specifically asking him to address Congress on the threats posed by radical Islam and Iran,” Boehner said in the meeting. “America and Israel have always stood together in shared cause and common ideals, and now we must rise to the moment again. Let’s send a clear message to the White House — and the world — about our commitment to Israel and our allies.”

Many Republicans and Democrats wary of the U.S.-Iran talks have suggested Congress pass a new round of sanctions. Additional sanctions have bipartisan support, but Obama said in his State of the Union speech Tuesday night that he would veto such measures at this time. On Wednesday, Boehner declined to commit to bringing that legislation to the floor.

“I do expect that we’re going to have hearings on Iran sanctions legislation, the timing yet to be determined,” Boehner said.