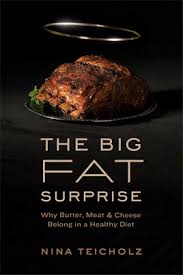 Reviewing the entire medical literature, The Big Fat Surprise: Why Butter, Meat and Cheese Belong in a Healthy Diet lays out the scientific case why our bodies are healthiest on a diet rich in saturated fat from animal products. Analyzing study after study, Nina Teicholz leaves no doubt that the number one cause of the global epidemic of obesity, diabetes and heart disease is the low fat high carbohydrate diet doctors have been pushing for fifty years.

My initial reaction on learning how the low fat diet became official government policy was to feel ripped off and angry. For decades, the medical establishment has been blaming fat people for being obese, portraying them as weak willed and lacking in self control. It turns out the blame lay squarely with their doctors, the American Heart Association (AHA), the US Department of Agriculture (USDA), Congress and the food manufacturers who fund the AHA (Proctor and Gamble, Nabisco, General Foods, Heinz, Quaker Oats and Corn Products Refining Corporation) for foisting a diet on them that increases appetite and weight gain.

The law fat diet is based on a “theory” put forward in the 1950s that heart disease was caused by elevated cholesterol levels – and a few deeply flawed epidemiological studies. In other words, the low fat diet is a giant human experiment the medical profession conducted on the American public while attempting to prove that saturated animal fats cause heart disease. Fifty years of research would show the exact opposite: not only do low fat high carbohydrate diets increase the risk of cardiac death, but they’re also responsible for a myriad of other health problems, with obesity and diabetes being the most problematic.

The studies Teicholz cites also debunk the myth that animal fat increases the risk of breast and colon cancer.

Heart Attacks Rare Prior to 1900

Coronary artery disease and heart attacks were virtually unknown prior to 1900. When Ancel Keys, the father of the low fat diet, began his anti-fat crusade in the 1950s he claimed that industrialization and an improved standard of living had caused Americans to switch from a plant based diet to a diet that was higher in animal fats. This was total rubbish. Prior to 1900, Americans had always eaten a meat-based diet, in part because wild game was much more plentiful in North America than in Europe. Early cookbooks and diaries reveal that even poor families had meat or fish with every meal. Even slaves had 150 pounds of red meet a year, which contrasts unfavorably with 40-70 pounds of red meat in the current American diet.

What changed in the twentieth century was the introduction of cheaper vegetable fats into the American diet, starting with margarine and Crisco in the early 1900s.

Teicholz also discusses the role of statins (cholesterol lowering drugs) in this context. Statins do reduce coronary deaths, but this is due to their anti-inflammatory effect – not because of their effect on cholesterol.

For decades, researchers whose findings linked low fat diets with higher rates of heart disease, cancer and stroke were systematically silenced and sidelined. As frequently happens with doctors scientists who challenge the powerful health industry, their grants were cut off and, in some cases, their careers destroyed.

For fifty years, the medical establishment simply ignored the growing body of research linking the high sugar/carbohydrate component of the low fat diet to heart disease, as well as those linking vegetable oils to cancer. Vegetable oils oxidize when cooked, leading to the production of cancer causing compounds such as aldehyde, formaldehyde and 4-hydroxnonene (HCN). Unsurprisingly diets in which vegetable oils (other than olive oil) are the primary fat are linked with an increased incidence of cancer. Several studies overseas have found high levels of respiratory cancer in fast food workers exposed to superheated vegetable oils.

The Big Fat Surprise includes a long section on the Atkins diet, a popular high fat/protein low carbohydrate weight reduction diet in the 70s and 80s. The use of a high fat low carbohydrate diet for weight loss dates back to 1862 and was heavily promoted by Sir William Osler in his 1892 textbook of medicine. According to Teicholz, recent controlled studies totally vindicate Dr Robert C Atkins, who was ridiculed as a dangerous quack during his lifetime. They also debunk claims that high levels of protein in the Atkins diet cause kidney damage. In addition to being perfectly safe, controlled studies show it to be extremely effective for weight loss and treating diabetes.

The USDA and AHA Quietly Reverse Themselves

As Teicholz points out in her conclusion, the nutrition researchers who blindly pursued their anti-fat campaign – and politicians and corporate funders who supported them – have done Americans an immense disservice by creating a virtual epidemic of obesity and diabetes.

A few years ago, the tide began to turn, largely due to the 29,000 subject Women’s Health Initiative launched in 1993. In 2013, the USDA and AHA quietly eliminated fat targets from the dietary recommendations. Because they made no real effort to publicize their change of heart, many doctors are still giving their patients the wrong dietary advice and hounding them about their cholesterol levels.

The take home lesson from this book is that it’s virtually impossible to eat too many eggs or too much red meat, cheese, sausage and bacon. Americans (and their overseas English-speaking cousins) need to dump the skim milk and margarine down the sink because whole milk and butter are better for you. People need to go back to cooking with lard, bacon drippings and butter. Cooking with vegetable oils can give you cancer.

Anyone with a weight problem needs to totally eliminate sugar and carbohydrate (the Atkins diet recommends less than half a slice of bread a day).

And if your doctor hassles you about your cholesterol tell him or her to read this book.