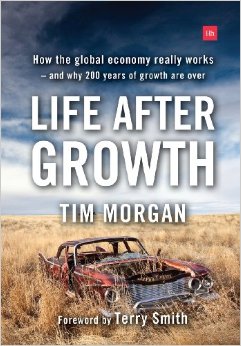 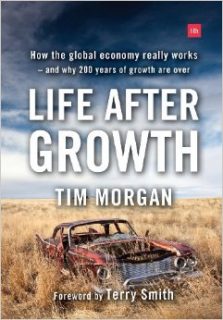 The main premise of Life After Growth: How the Global Economy Really Works – and Why 200 Years of Growth are Over  is that global economic growth has ended. Western governments conceal this fact through debt creation, inflation and clever manipulation of statistical economic indicators. According to Tim Morgan, leading analyst at the London financial brokerage Tullett Prebon, economic growth ended in 2000 and the economy has been shrinking ever since.

Morgan attributes the end of global economic growth to the high cost of fossil fuels.* This is because the real economy (which many people confuse with the financial economy) is a direct function of surplus energy. In pre-agricultural times, there was no energy surplus: human beings derived exactly the same amount of energy from their food as they expended acquiring it. With the advent of farming, they managed to produce a small surplus of energy that enabled a small minority to engage in work other than food production.

In the 18th century the invention of the heat engine enabled surplus energy (and the real economy) to grow exponentially over the next 200 years. Now that the cheap fossil fuel has been used up, our energy surplus is declining. This, in turn, is reflected in the gradual shrinkage of the global economy.

Energy surplus is measured as EROEI (Energy Returned Over Energy Invested), the ratio between the energy produced and the energy consumed in the extraction or production process. 1930s oil fields had an EROEI of 100:1. Once the easily accessible oil was used up, the EROEI began to decline. It was 30:1 in 2000 and it declines by about 2% a year. In 2014 it stood at 14:1. Unconventional oil sources have an extremely low EROEI (eg tar sands and fracked shale oil have an EROEI of 3:1).**

Declining EROEI’s are always accompanied by a spike in oil prices. This translates into higher prices for everything, due to the energy required for food production and manufacturing. Owing to higher prices, people consume less and the economy slows.

Globalization Has Been Extremely Damaging

Morgan is highly critical of politicians who fail to distinguish between the real economy of goods and services and the shadow economy of money and finance. He also feels globalization and rampant consumerism have been extremely damaging to the real economy. The mistake western countries made with globalization was reducing their production without reducing consumption. Instead they increased consumption levels by increasing borrowing and debt. Globalization was extremely beneficial for banks, due to the voracious demand for their product (loans). Meanwhile the diversion of large sums from production to the finance sector – aggravated by consumerism and the rise of consumer debt – hastened the decline of the real economy.

This wholesale debt creation and the widening split between the real economy and the financial economy is largely reflected in inflation and the destruction of the value of money. The US dollar lost 87% of its purchasing power between 1962 and 2012, which the government systematically conceals through misreporting of key economic indicators.

All economies function best when the financial economy coincides with the real economy. At present the primary methods of debt destruction are quantitative easing*** and inflation (it’s always easier to repay debts with devalued money). Other methods in the wings are cuts in pensions and Social Security payments and eventually bank failures and government defaults. Morgan feels that resource poor countries like Japan and the UK are at highest risk for default.

How Governments Lie with Statistics

My favorite chapter details the decades of statistical manipulations that have made government indicators of inflation, growth, output, debt and unemployment totally meaningless. John Kennedy was the first to exclude “discouraged” workers (who weren’t actively seeking work) from the unemployment rate. Johnson was the first to conceal the size of the government deficit by including the Social Security surplus in the federal budget. Nixon was the first to exclude energy and food costs (which rise the fastest) from core inflation calculations.

I was most shocked to learn that 16% of GDP consists of “imputations” or dollars that don’t actually exist. The largest single imputation the US government adds is “owner equivalent” rent. This is an amount equivalent to the rent all rent homeowners would have to pay if they didn’t own their own home. In 2011, this added up to $1.2 billion (out of a total GDP of $12.7 trillion).

The US Government is Technically Bankrupt

Morgan estimates that as of 2011 true US debt (government, business and personal) was 449% of GDP. Technically this means the US is insolvent as collective liabilities far exceed any realistic prediction of future income.

Morgan maintains that industrialized societies urgently need to living with less surplus energy. Rather than continuing to delude themselves (and us), our political leaders must face up to the reality that our claims on future energy surpluses (aka debt) are totally unrealistic.

They need to end globalization and rampant consumerism and enact policies (support for renewable energy, public transport and strong local economies) that will help people adapt to the new economic reality.

*Most analysts predict oil prices will return to $100+ a barrel in June 2015, once the US surplus is used up.
**Some other EROEI’s (for the sake of comparison):
• Coal 8:1
• Solar PVC panels 8:1
• Solar concentrating power: 17:1
• Large hydro generation: 22:1
• Small hydrogenation 32:1
• Landfill/sewage gas cogeneration 40:1
• Onshore wind 20:1
*** Quantitative easing (QE) is an unconventional form of monetary policy where a Central Bank creates new money electronically to buy financial assets, like government bonds. This differs from conventional money creation, in which private banks create money out of thin air as new loans (see Money as Debt).