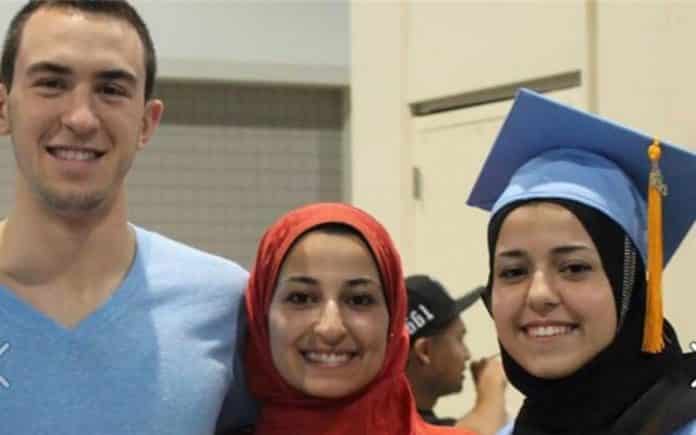 The cold-blooded murder of the three Muslim students (Deah Shady Barakat, his wife Yusor Mohammed Abu-Salha and her sister Razan Mohammed Abu-Salha, should not come as a shock. Well-organized, well-funded American Jewish/Zionist and Evangelical Christians and mainstream media have been demonizing Muslims in America for years. 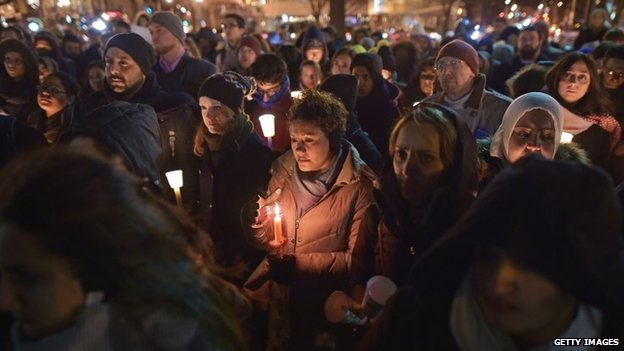 Finally after 3 days of utter and shameful silence, perhaps prompted by Turkish President Recep Tayyib Erdogan, President Barack Obama finally broke his silence and spoke. Denouncing the murder of the three-college student “ as  brutal and outrageous murder” with no justification for killing people because of “what they look like” or ” how they worship”. 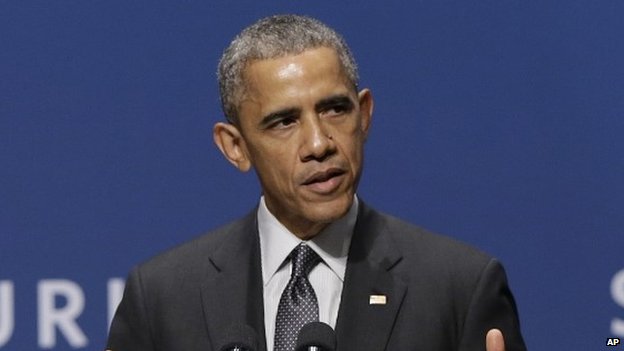 Between 2008 and 2011 several groups and organizations committed to incitement of hate against Muslims and Arabs have raised and distributed $119 million funding American Jewish/Zionist groups in America dedicated to Islamophobia.

In one year over $42 million were donated to well organized groups dedicated to demonize Muslims, inciting hate in media and on campuses and of course all are dedicated to loyalty to Israel not America.

Well known organizations and groups include among others Steve Emerson, the self proclaimed “terrorism” experts getting his feed and intelligence from Israeli sources and passing them on to American intelligence agency, as if the tens of billions of dollars are not enough for America to have its own intelligence sources but had to rely on “private” sources.

Steve Emerson made a name for himself producing a documentary” Jihad in America” and as the Executive Director of “Investigative Project on Terrorism”. Emerson inciting hate is quoted as saying “ The survivors of the explosion at the World Trade Center in 1993 are still suffering from the trauma. … A network of Muslims extremists committed to jihad against America. Their aim is to establish a Muslim empire”.

Emerson made a fool of himself and shown his racist colors when shortly after the Charlie Hebdo in Paris and in an interview on Fox News, claimed that the entire English city of Birmingham with 1,000,000 population was Muslim and “no go zone for non-Muslim” with “Muslim religious police “ beat any one who does not dress according to Muslim religious attire”. British Prime Minister David Cameron labeled Emerson “clearly a complete idiot”. Perhaps his Israeli intelligence sources failed to tell Mr. Emerson that the Muslim population of Birmingham is 20% and there is No such thing as “religious police”.

Others, dedicated to incitement of hate is Pam Geller, the Jewish American blogger and author well known for her outspoken criticism of Islam and Muslims. Dedicated to the “opposition to Islamic activism and causes” in America. She is quoted as saying that “ terrorism doesn’t spring from perversion of Islam but from the religion itself”.

Pam Geller also is the one well known for those subway advertisements in cities as New York, Miami, and San Francisco among others. The advertisement “ In any war between the civilized man and the savage, support the civilized man, support Israel, defeat Jihad” was initially rejected by the transport authorities. However Judge Paul A. Engelmayer, of the US District Court of Southern District ruled the advertisement as “protected speech” under the First Amendment. In his ruling the judge states” not only protected speech- it is the core political speech is afforded the highest level of protection under the First Amendment” I wonder what would be the judge ruling if the target was Israel and Judaism?

With an army of over 5,000 informers, STASI like agents, Daniel Pipes of Campus Watch and Middle East Forum, is “dedicated to “ review and criticize Middle Eastern Studies in North America with aim to improving them”. By improving them, Campus Watch intimidate and publicly threatens those professors who are deemed “pro-Palestinian” and those who dare to criticize Israel, its Occupation and practices.

One of the most courageous professors, who took the challenge, is Professor Judith Butler, comparative literature professor at Berkley. She posted this message

“ I have recently learned that your organization is compiling a dossiers on professors at US academic institutions who opposed the Israeli Occupation, its brutality, actively support Palestinian rights of self determination as well as a more informed and intelligent view of Islam than is currently represented in the US media. I would be enormously honored be counted among those who actively hold these positions and would like to be included in the list of those who are struggling for justice.”

Campus Watch is known for taping professor’s presentations and discussions in class and posting it on the web. One of the targeted professors is Rashid Khaldi of Columbia University. His dossier was posted on the web with threats of withholding city and alumni funds because of his stands. In a taped call from one of those STASI informer  tells professor Khaldi “ Columbia alumni love Campus Watch, because they keep an eye on those like you, we have one eye on you- you better watch out”. Campus Watch is the AIPAC in academia.

Not withstanding all these well funded and well organized hate groups, America continue to be a blessed place, and yes, notwithstanding these tragic events, we are all blessed to be citizen of this great country of our, yours and mine. 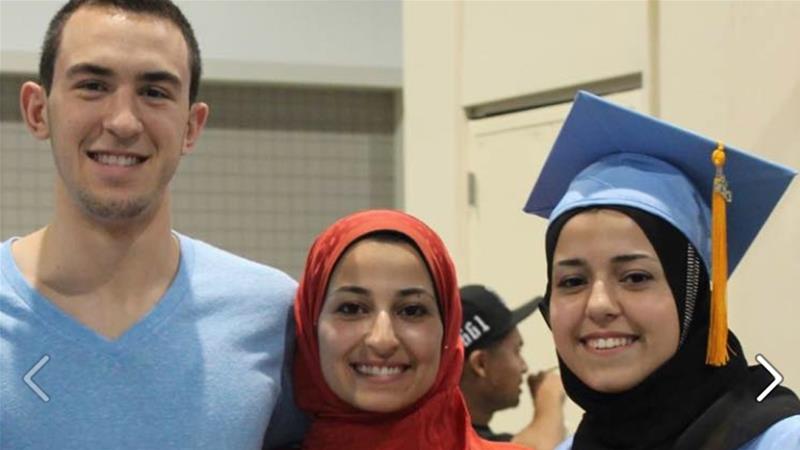 Feeling blessed for being an American, Yusor, in a recorded message on NPR Story Corps states” There are so many different people from so many places background and religion. But here we are all one”. “It is beautiful to see-people of different areas interacting and being family and community”
May they rest in peace, Salam.