Editor’s note: Uri describes below a recent vote in the Knesset — one that few Americans would ever hear about unless they paid attention to Gush Shalom or another similar news outlet.

US media censors all news from Israeli media that would embarrass the Zios. No threats are necessary.

Recently, Netanyahu dashed through the Knesset plenum hall to cast his vote concerning a bill forbidding gratis (free) newspapers of the kind that billionaires establish and distribute freely. I wonder what billionaire had just been on the phone to Bibi?

Welcome again to the world of bought-and-paid-for Israeli politics. It is not unlike American politics, but on some sort of state-sponsored steroids — with many of the same players in the highest unseen craigs.

Las Vegas Boss Shelley Adelson is the poster child for international crime boss money flowing into politics now worldwide, with our low life politicians literally tripping over themselves to get a piece of the action — turning our democratic system into not only a fraud but a public one.

Now, Shelley has launched a propaganda arm for the Zionist kingdom in Tel Aviv, called Israel Hayom. It is a free paper used to undermine the commercial competition and give him an inside track as a kingmaker in Israeli politics.

This has been going on for some years all over the world. Jewish moguls in Canada have taken over media, not only to control the political situation but, through the elected officials, the judicial branch, and law enforcement.

The key goal there… no investigations or prosecution of Israeli espionage under any circumstances. The Murdoch empire has cookie-cutter this subversion in Australia, Europe, and the US.

Our own FBI has been muzzled from bringing such cases, as it’s rocking the boat. We have interviewed many who have shared the pitiful story of the country’s highest officials protecting Zionist espionage here in return for; you fill in the blank… Jim W. Dean 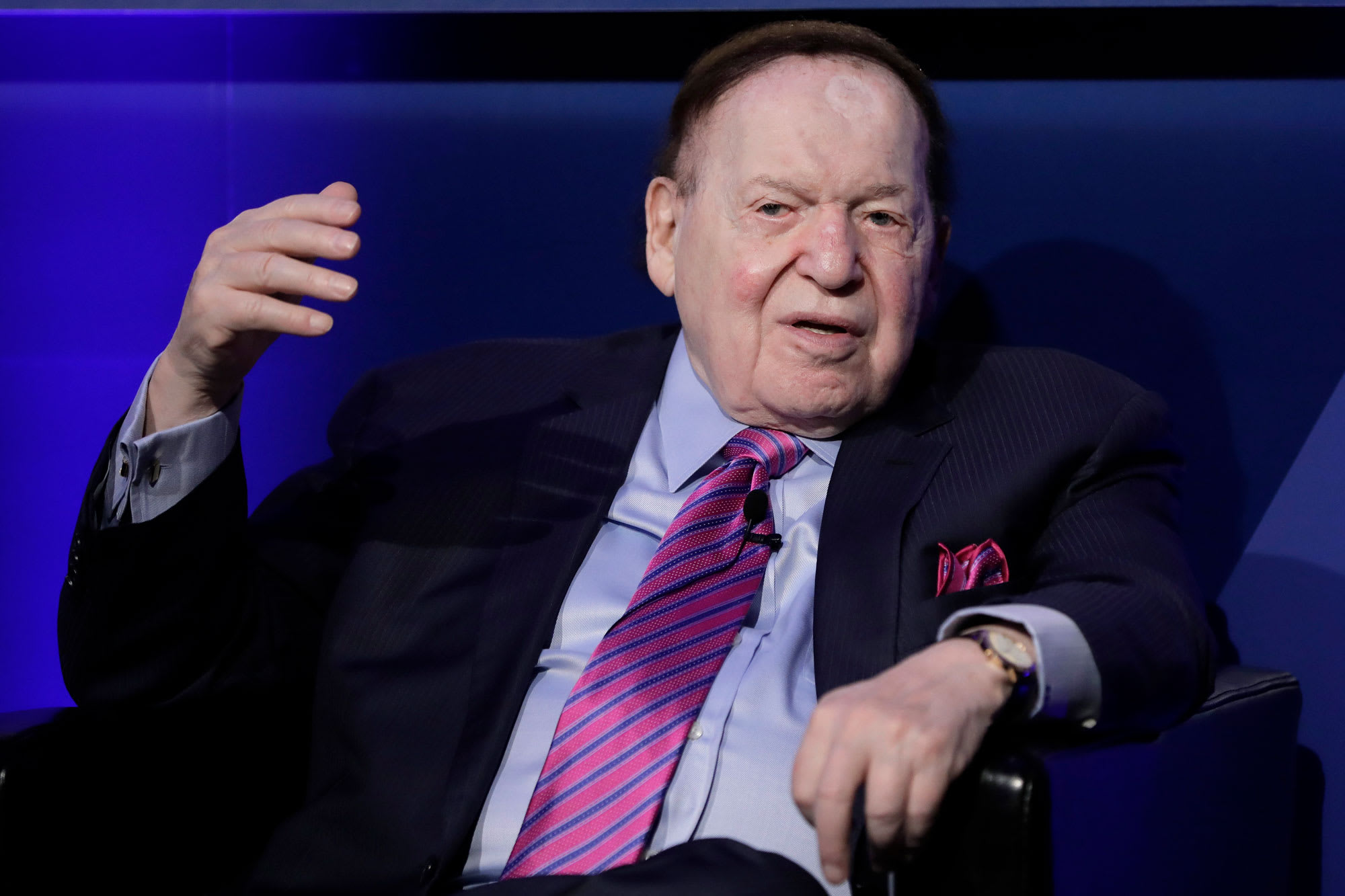 Who is the ruler of Israel? Prime Minister Binyamin Netanyahu, of course. WRONG. The real ruler of Israel is one Sheldon Adelson, 81, American Jew, Casino king, who was rated as the world’s tenth richest person, worth 37.2 billion dollars at the latest count. But who is counting?

Besides his casinos in Las Vegas, Pennsylvania, Macao, and Singapore, he owns the US Republican party and, lately, both Houses of the US Congress. (by the way, you can find out about Singaporean online casinos on NativeCasinos Singapore). He also owns Binyamin Netanyahu.

Adelson’s connection with Israel is personal. On a blind date, he fell in love with an Israeli woman.

Miriam Farbstein was born in Haifa, attended a prestigious high school, did her army service in the Israeli institute which deals with bacteriological warfare and is a multifaceted scientist. After one of her sons (from her first marriage) died of an overdose, she is devoted to the fight against drugs, especially cannabis.

Both Adelsons are fanatical supporters of Israel. Not just any Israel, but a rightist, supremacist, arrogant, violent, expansionist, annexationist, non-compromising, colonialist Israel. In “Bibi” Netanyahu they found their man. Through Netanyahu, they hope to rule Israel as their private fief.

To assure this, they did an extraordinary thing: they founded an Israeli newspaper, solely devoted to the furthering of the interests of Binyamin Netanyahu. Not of the Likud, not of a specific policy, but of Netanyahu personally.

Years ago, I invented a Hebrew word for papers that are distributed for nothing. “Hinamon” translates, roughly, into “ragratis” or “gratissue” and was intended to denigrate.

But I did not dream of a monster like “Israel Hayom” (“Israel Today”) – a paper with unlimited funds, distributed every day for nothing in the streets and malls all over the country by hundreds, perhaps thousands of paid young persons.

Israelis love getting something for nothing

Israel Hayom is now the daily paper with the widest distribution in Israel. It drains readers and advertising revenue from its only competitor – Yedioth Ahronoth (“Latest News”), which held this title until then.

Yedioth reacted furiously. It became a ferocious enemy of Netanyahu. Yossi Werter, a commentator of the center-left Haaretz (which has a far lower circulation) even believes that the present election boils down to a contest between the two papers.

That is vastly exaggerated. Judged by political and social content, there is little to differentiate the two. Both are super-patriotic, war-mongering and rightist. That is the journalistic recipe for attracting the masses anywhere in the world.

Yedioth is owned by the Moses family, a business-minded clan. The present, third-generation publisher is Arnon (“Noni”) Moses, the publicity-shy boss of a large economic empire based on the paper. The paper serves his business interests, but he has no special political interests.

Adelson is unique. In Israel, betting is forbidden by law. We have no casinos, and secret gambling dens are raided by the police. In our early youth, we were taught that casino moguls are bad people, almost like arms merchants. They take the money off poor addicted people, throwing them into despair, even suicide. See Dostoyevsky.

Israelis read Israel Hayom (it’s something for nothing, after all), but they don’t necessarily like the man and his methods. So some members of the Knesset were encouraged to enter a bill forbidding gratis newspapers altogether.

Netanyahu and the Likud party did everything to obstruct this bill. But in the preliminary vote (necessary for private members’ bills) they were beaten in an amazing way. Even members of Netanyahu’s governing coalition voted for it. The cameras caught Netanyahu literally running in the Knesset plenum hall to gain his seat before the voting started. The vote was 43 to 23. Almost half the Likud members absented themselves. Foreign Minister Avigdor Lieberman and his party voted for the bill. So did ministers Ya’ir Lapid and Tzipi Livni.

From the preliminary vote to the final adoption, such a bill has to pass several stages. There was plenty of time to bury it in one of the committees. But Netanyahu was furious. A few days after the vote, he dismissed Lapid and Livni from the cabinet, causing the government coalition to break up and the Knesset to disperse.

Why did Netanyahu do such a foolish thing less than halfway through his (third) term of office? There can be only one logical explanation: he was ordered to do so by Adelson, in order to prevent the adoption of the law.

If so, Adelson is now our chief lawmaker. Perhaps he is also our chief government-maker.

Money plays an ever-increasing role in politics. Election propaganda is made on television, which is very expensive. Both in Israel and the US, legal and illegal funds pour into the campaign, directly and indirectly.

Corruption is abetted or tolerated by the courts. The very rich (known euphemistically in America as the “wealthy”) exercise undue influence.

In the last US presidential elections, Adelson poured rivers of dollars into the contest. He supported Newt Gingrich, and then Mitt Romney, with huge sums of money. In vain. Perhaps Americans don’t like to be ruled by captains of casinos.

For the next US presidential elections, Adelson has started early. He has summoned to his Las Vegas casino HQ all leading Republican candidates, to grill them on their allegiance to him – and to Netanyahu.

The Israel Hayom newspaper is, of course, a big propaganda machine, totally devoted to the re-election of Netanyahu. All quite legal. In a democracy, who can tell a newspaper whom to support? We are still a democracy, for God’s sake!

It seems to be strange for a country to allow a foreigner, who never lived in Israel, to have such enormous power over its future, indeed, over its very existence.

That’s where Zionism comes in. According to the Zionist creed, Israel is the state of the Jews, all the Jews. Every Jew in the world belongs to Israel, even if temporarily residing somewhere else. A few days ago, Netanyahu publicly claimed to represent not just the State of Israel but also the entire “Jewish People”. No need to ask them.

Accordingly, Adelson is not really a foreigner. He is one of us. True, he cannot vote in Israel, though his wife probably can. But many people, including himself, believe that he, being a Jew, has a perfect right to interfere in our affairs and dominate our lives.

For example, the appointment of our ambassador in the US, Ron Dermer is an American, born in Miami, who was active in Republican politics.

To appoint an American functionary of the Republican Party as ambassador of Israel to a Democratic administration may seem strange. Not so strange if Netanyahu acted under the orders of Sheldon Adelson.

It was Adelson who prepared the witches’ brew that is now endangering Israel’s lifeline to Washington. His stooge, Dermer, induced the Republicans in Congress – all of them dependent on Adelson’s largesse or hoping to be so – to invite Netanyahu to give an anti-Obama speech before both Houses.

While this intrigue was in preparation, Dermer met with John Kerry but did not tell him of Netanyahu’s coming. Neither did Netanyahu inform President Obama, who, in a fury, announced that he would not meet with the Prime Minister.

From the point of view of Israel’s vital interests, it is sheer madness to provoke the President of the United States of America, who controls American’s flow of arms to Israel and the American veto power in the UN.

But from the point of view of Adelson, who wants to elect a Republican president in 2016, it makes sense. He has already threatened to invest unlimited sums of money to prevent the reelection of any Senator or Representative who is absent from Netanyahu’s speech.

We are nearing open warfare between the Government of Israel and the President of the United States. Is someone playing roulette with our future?