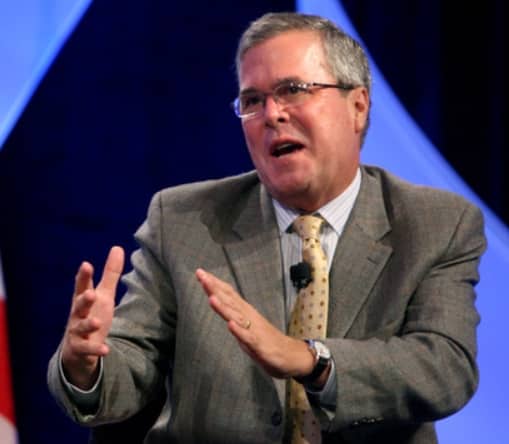 Presidential contender says of NSA dragnet ‘this is a hugely important program’, in sharp contrast to Republican rivals for the White HouseJeb Bush in Chicago. Bush described surveillance as a necessary part of a ‘long-term commitment to fight this battle’ against terrorism….Tom McCarthy in New York

Former Florida governor Jeb Bush delivered a full-throated defense of government surveillance programs on Wednesday, expressing a resounding faith in techniques pioneered by his brother, George W Bush, and staking out a position in sharp contrast with other prospective 2016 presidential candidates.

Dragnet metadata collection by the NSA and similar programs were necessary to keeping US citizens safe from foreign terror threats, Bush said – unprompted – during remarks laying out his foreign policy vision as a prospective 2016 presidential candidate.

“For the life of me, I don’t understand – the debate has gotten off track, where we’re not understanding and protecting,” Bush said in a major speech at the Chicago Council on Global Affairs. Jeb Bush attacks Obama’s foreign policy and insists: ‘I am my own man’

Bush made passing reference to civil liberties concerns attached to the programs, which critics have warned infringe on constitutional privacy protections.

“We do protect our civil liberties, but this is a hugely important program to use these technologies to keep us safe,” Bush said.

Fellow members of the prospective 2016 presidential field from both parties have warned that the government went too far after 9/11 in expanding surveillance without sufficient legal grounding or privacy protections.

“I believe what you do on your cellphone is none of their damn business,” Kentucky senator Rand Paul told a conservative gathering last year. Hillary Clinton, who is expected to lead the Democratic presidential field, has said of surveillance: “There is no doubt that we might have gone too far in a number of areas.”

Bush described surveillance as a necessary part of a “long-term commitment to fight this battle” against terrorism. “That requires responsible intelligence gathering and analysis, including the NSA metadata program, which contributes to awareness of potential terror cells and interdiction efforts on a global scale.

Efforts to pass legislation to rein in NSA surveillance fell short late in 2014, at the close of the last Congress. Debate is expected to pick up again in advance of the expiration in June of key provisions of the USA Patriot act, the George W Bush-era law providing legal support for the metadata collection program and others.

Long before the Edward Snowden revelations, the administration of Jeb Bush’s brother used warrantless wiretapping to sweep up communications by US citizens without legal cover. That program and others, including the NSA’s phone metadata collection program, were made legal in retrospect by a series of Bush-era laws and legal opinions.

Jeb Bush on Wednesday described a broad need for American interventionism around the world as a way to keep US citizens “safe”. “If we withdraw from the defense of liberty elsewhere, the battle will come to us anyway,” Jeb Bush said.