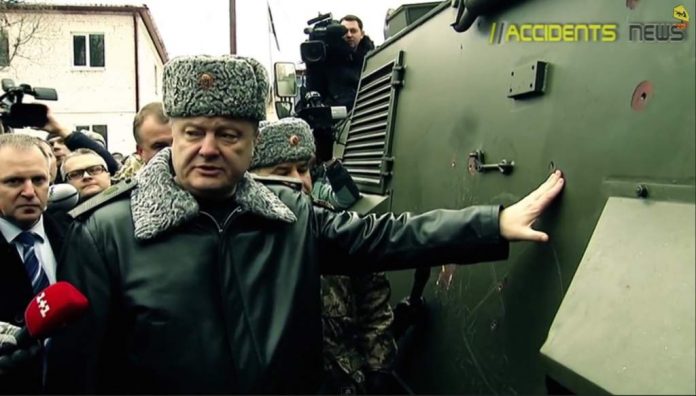 Initially it seemed surprising that on the first day of the negotiations marathon in Minsk a bill to “provide lethal weapons to the Government of Ukraine in order to defend itself against Russian-backed rebel separatists in eastern Ukraine” would be introduced in the US Congress.

However, it soon became clear that its sponsor, Sen. James Inhofe, simply harbors no illusions about his Ukrainian partners’ competence or ability to comply with their obligations. He understands that Kiev will inevitably violate the cease-fire and that Washington will soon have to explain why the militias in the devastated region of what is known as the “Debaltsevo cauldron” are in possession of such a vast number of captured weapons originating from NATO countries.

And there can be no doubts whatsoever that this will happen. The militia continues to provide documented evidence of Kiev’s use of NATO-standard weapons, such as Paladin M109 self-propelled howitzers, portable Javelin anti-tank weapons systems, and small arms (M16 rifles and much more).

Video taken in Gorlovka on Feb.1, 2015. A rebel fighter explains that the Christian cathedral in the centre of town was shelled by 155mm cannons of a US-made Paladin howitzer.

The age and condition of these weapons suggests that the West is simply selling Ukraine military equipment that was already destined for the recycling bin. For example, Britain first produced its Saxon armored personnel carriers in 1983, and they were removed from service in 2008.

Now they are being shipped through the port of Odessa to the company Ukroboronprom, which will adapt them to the needs of the Ukrainian army. The Ukrainian government is spending about $51,000 on each Saxon AT-105. It is worth noting that due to the all-out crisis situation there, the Ukrainians have vetoed the idea of producing their own Dozor-B armored carrier. According to official statistics, before 2007 the German army possessed 570 M109 Paladin self-propelled howitzers. But not a single one remains. Where do you think those tanks went?

The answer is simple – in December 2014, Ukrainian officials suddenly closed the airports in Dnepropetrovsk, Zaporozhye, and Kharkov because of the ostensible threat of Russian paratroopers (!), while several of NATO’s C-17B Globemaster and C-130 Hercules military transport planes landed there.

Eyewitnesses in Zaporozhye and Dnepropetrovsk saw four self-propelled Paladin howitzers (and boxes of their ammunition) being unloaded. Witnesses in Kharkov claim two Romanian LAROM MLRS and a Spanish Teruel-3 were transported there.

Military convoys that have been regularly crossing the Polish-Ukrainian border since the summer of 2014 are arriving at the 169th Training Center of the Ukrainian ground forces in the Chernihiv region, where instructors from NATO countries are conducting workshops with soldiers serving in Ukraine’s security forces, in order to train them on NATO weapons and equipment. The incompetence of the Ukrainian army, as well as the question of provisioning them, is a very serious problem. NATO weapons systems are difficult to operate and require large quantities of the proper ammunition, which is not manufactured in Ukraine.

But channels for delivering such ammunition to Ukraine have already been established. For example, in early February the cargo ship Yasar Abi sailed from Burgas (Bulgaria) to the port of Oktyabrsk (the Mykolaiv region, Ukraine) carrying a load of 680 tons of NATO and old Soviet ammunition.

So Senator Inhofe’s bill is not about rendering military assistance to the puppet government in Kiev, but is rather a way to legitimize the shipments that are already being sent. As usual, only the most aged, decrepit weapons are ending up in the region where the anti-terror operation is underway – meaning that Ukrainian officials are re-exporting everything that is worthy of resale to third countries, including Syria.

No one can guarantee that the weapons that will pass to Ukraine legally will not soon be used against America’s interests in global hot spots. However, it seems that this threat is the last thing on the minds of US senators.