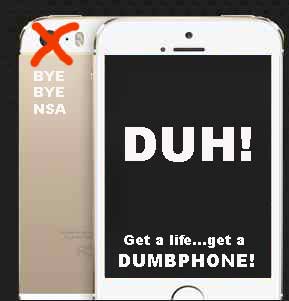 …without selling our souls to the avaricious avatars of ultimate evil.

Some of us have set up little side-businesses. Gordon Duff sells hand-crafted high-grade military weapons. Jim Fetzer invests in 9/11 truth conferences (but hasn’t quite hit the jackpot yet). Jim Dean can get you wholesale discounts on confederate flags. Preston James peddles shards of mystery-metal from the Roswell crash out of the trunk of his car.

Figuring it was time to cash in, and brimming with American entrepreneurial spirit, I decided to get in on the ground floor, as it were, of the ever-onward march of technology. Et voilà: The brand-new 2015 edition of the ultimate in portable personal privacy: the DUMBPHONE!

What it is, see, is…well, it looks just like a Smartphone, except it’s really, REALLY dumb. The brand-new Barrett™ Dumbphone is far, far stupider than earlier models – lame attempts to create and market  dumbphones that weren’t really all that stupid. Those “dumbphones,” which are all the rage in artist-infested East Bay warehouse districts and other trendy places, are just old-fashioned cell phones. How dumb is that?

Barrett™ Dumbphones carry the avant-garde lower-tech logic of earlier models to their ultimate conclusion. My phones, in cell phone IQ terms, are complete and utter idiots. Their cellular communication intelligence quotient is not just absolute zero, it’s actually even lower than that. Like Wisconsin’s current weather, it’s well into the negative range, deep in the subzero nether regions where cyberpenguins and digital polar bears enjoy idiotic frozen frolics.

Ironically, I was only able to manufacture these babies through the use of cutting-age digital technology. My friend with a 3-D printer had no trouble writing a program to “print” plastic copies of a Smartphone. The result looks exactly like a Smartphone, except it doesn’t work. It’s just an inert lump of plastic with a little bit of metal for show.

Before you start ridiculing my idea, consider all the advantages of the Barrett™ Dumbphone:

*It looks just like a real Smartphone, making you look cool and hip and trendy as you carry it around.

*It costs far less than a real Smartphone.

*Since you won’t have to be constantly talking to all your moronic friends and looking at their stupid cat videos, you can walk around saying anything you want into your Dumbphone, pretending to be talking to famous celebrities and stuff like that, making everyone at the convenience store checkout line literally drool with envy (just be careful not to slip on it as you leave).

*The ultimate in personal privacy technology, the Dumbphone cannot possibly be hacked, and is completely untraceable by the NSA.

In short, the Dumbphone gives you the most important advantages of a Smartphone for a fraction of the cost, while eliminating the immense waste of time associated with actual Smartphone use.

On top of all that, the Dumbphone has the potential to revitalize our failing economy. The guys selling knock-off Rolex watches on New York sidewalks, who have been among the workers hardest-hit by the current economic slump, will all be put back to work when the Dumbphones hit the street.

And finally, when our insane enslavement to technology reaches its inevitable “singularity” and everything collapses, including the electrical and communications grids – and everyone else is miserable because their Smartphones don’t work any more – you’ll be smiling triumphantly, because your Dumbphone will still work just as well as it ever did.

As an additional bonus, when the hordes of hungry zombies come after you, you can throw it at their heads before you turn and run.

[This article was inspired by David Skrbina’s book The Metaphysics of Technology. Stay tuned to Truth Jihad Radio for next week’s interview with Skrbina.]