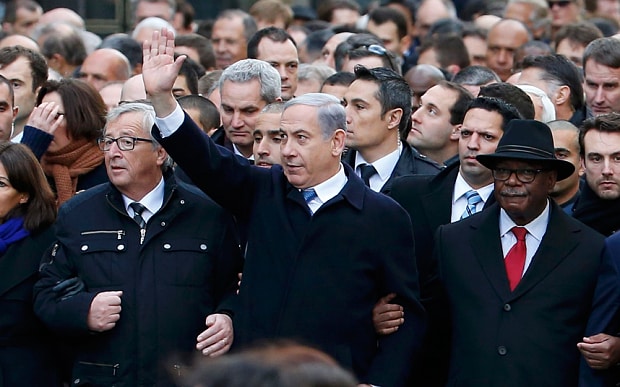 For a long time, Bibi Netanyahu and his American Zionist cohorts in the administration, certainly in the media and Congress have actively supported and sponsored the notion that Israel is the state for and of the Jewish People, and that Islam is a terrorist organization and religion. Very few voices within the American Jewish community spoke up and denied such claims.

Now that Bibi Netanyahu at the invitation of Speaker John Boehner decided to speak before a Joins Session of Congress, it is heartening to hear members of the American Jewish community speak up with very loud and clear message and voices that “Bibi Netanyahu does not speak for the American Jews.” Of course he does speak for a significant number of the American Jewish community, that funds AIPAC, Anti Defamation League, Israeli-American Council, Campus Watch, CAMERA, Zionist Organization of America, Steve Emerson, Daniel Pipes, Pamela Geller, and that ‘predator weasel” Elie Wiesel.

“I went to Paris not just as the prime minister of Israel, but as a representative of the entire Jewish people” Bibi Netanyahu speaking before the French speakers of the Likud activists.

“ We are not at war with Islam. We are at war with the people who have perverted Islam” President Barack Obama speaking at the White House Summit to Counter Violent Extremism.

Certainly Netanyahu does speak for members of AIPAC, 200,000 strong, die hard army of committed Jews who will occupy Washington that weekend, and are committed to an ever expansionist criminal Israel, an Zionist Apartheid Israel.

Netanyahu, certainly speaks for the well established, politically, economically and financially powerful American Jewish leadership, a leadership that should takes full responsibility for preventing many administrations from Johnson, Nixon, Ford, Carter, Reagan, Bush 1, Clinton, Bush 2 and Obama from pursuing a just and lasting peace between Israel and the Arabs.

And yes, the blood of both Israelis and Palestinians is on its hands. All successive American administrations were either blackmailed or are beholding to the Zionist agenda for America and the world. They all gave Israel the diplomatic; the military cover to continue with its occupation in defiance of countless UNSC resolutions.

Yes, for the very first time we hear loud and clear voices of American Jews who are American First not Israeli First. While all support the safety and security of the Jewish people of Israel they do not share the criminal vision of a racist Apartheid state.

Recent advertisement in major newspaper and in articles, organizations like J-Street, Jewish Voices for Peace, writers like David Harris-Gershom all came out against Bibi Netanyahu forthcoming speech before a Joint Session of Congress.

The annual conference of AIPAC called its marching orders to war against Iran, doing all it can to incite members of Congress (American Knesset) calling on them to vote for more sanctions on Iran and in fact seeking Congress to declare yet another war for Israel. A war where committed American Jewish Zionists enlist in the IDF, leaving Americans like you and me to fight and die for Israel. With us poor suckers paying and footing the bills. As if the tens of thousands who died and the more than 900,000 injured in America war on terrorism are not enough.

For a long time, American Jewish Zionist leaders and their allies within the American Evangelical Christian movement always did their best in Congress in media, in Hollywood and on college campuses to label all Muslims as terrorists and Islam as a terrorist’s faith. Well, al-Qaeda and Daesh do not speaks and represent Muslims and Islam as these groups claim. And if we are to follow the same logic of American Zionists, and if are to accept Bibi claims that he speak for all Jews, then, all Jews are party to the continuous crimes committed by Israel, which they are not. In the same way that all Muslims are responsible for the crimes committed by al-Qaeda and Daesh, which they are not.